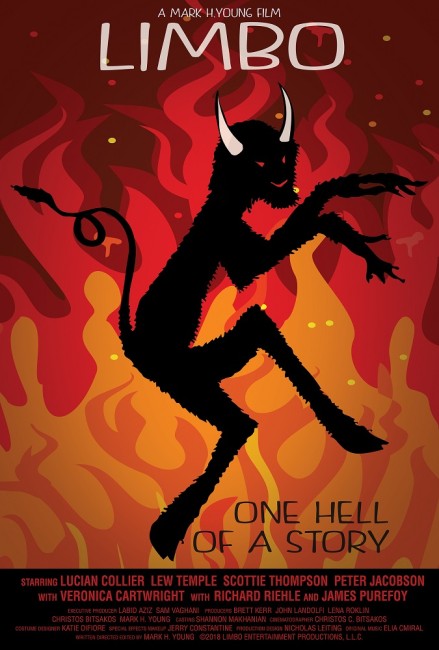 Jimmy Doyle wakes up in what he thinks is a police interrogation room. He is questioned by Balthazar who asks him to sign a confession. Before he does so, they are interrupted by Cassiel, Jimmy’s advocate, who urges him not to sign. It becomes apparent that Jimmy is in an afterlife limbo, having been shot while in the process of conducting an armed stick-up of a pawnshop. Balthazar is a demon come to convict Jimmy to Hell. Cassiel is an angel who wants to argue for the almost never granted complete pardon, although Jimmy finds that she has never defended a case before. In the course of their examination, witnesses are brought in from the woman who was shot during the robbery to Jimmy’s abusive father to the drug addict mother he mercy killed and the evidence does not look promising.

Limbo was the seventh film for Mark H. Young who had previously made the horror film Southern Gothic (2007), the post-holocaust film Tooth and Nail (2007), the hostage drama/serial killer film The Killing Jar (2010) and the backwoods monster film Feral (2017).

Limbo has a familiarity to its premise as it starts. The person awaking in what appears to be a police interrogation room before it is revealed to be in the afterlife is familiar from A Pure Formality (1994). Other films like Heaven Can Wait (1943), Defending Your Life (1991) and Along With the Gods: The Two Worlds (2017) treat the afterlife as a purgatory or waiting room where an individual’s life has to be examined in terms of the worth of its moral character. (For a more detailed overview of the genre see Films About The Afterlife).

Most of the film economically takes place in a single interrogation room setting, plus a few other locations in the flashback scenes. Mark H. Young brings in a modest cast. I was impressed with Lucian Charles Collier (just Lucian Collier on the opening credits). He has the languid good looks of a young Brad Pitt and underplays the part with a smouldering charm. A 71 year-old Richard Riehle turns up to tell a series of filthy jokes. The best parts come from Peter Jacobson as an angry and demanding top-level demon and an over-acting James Purefoy who turns up as Lucifer in the final scenes.

Limbo is an okay film but I never felt particularly engaged by it. It progresses like a typical interrogation/courtroom thriller. We get various flashbacks to Lew Temple’s past, although these are weighted so much in terms of showing his life as unredeemable as to prove monotonous ie. we have seen stories about people from bad and abusive backgrounds but this adds nothing to them.

The disappointment I felt when Lew Temple finally gets his redemption is that it is never particularly made clear why. [PLOT SPOILERS]. He is with neighbouring hooker Lauryn Canny and then exits the room as police arrive whereupon we hear gunshots. Quite what there is about this that makes every other deed he conducted worth of forgiveness is not something that is in any way made clear by the film.