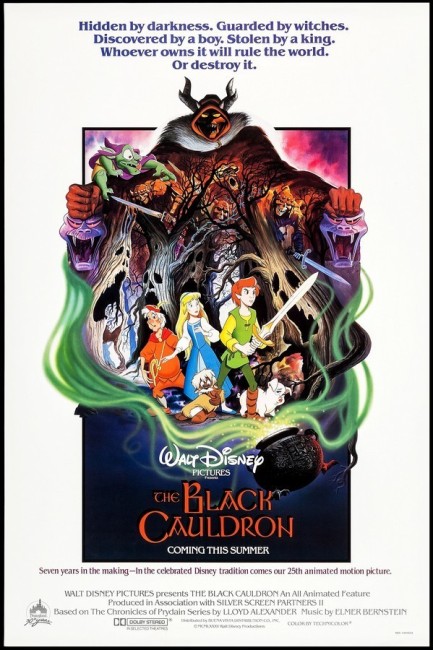 aka Taran and the Magic Cauldron

The idealistic young pig-keeper Taran is entrusted by his master to take the prophetic pig Hen Wen to safety. The evil Horned King is obsessed with finding the black cauldron of power and desires Hen Wen’s prophetic gift in order to do so. However, Taran fails miserably in his appointed task and the Horned King captures Hen Wen. Joined by the princess Eilonwy; Ffleeddur Fflam, a bard with a liberal regard for truth; and a cheeky small creature Guigi, Taran then takes on the task of finding the cauldron and defusing its power before the Horned King can obtain it.

The Black Cauldron was the 26th animated feature film from Disney. It was a production that was long in the works – since at least 1977. It certainly has some great things about it – the lovely airbrushed animation and dazzling light effects – but in other ways is a disappointment.

The problem is the timing of when The Black Cauldron was conceived. 1977 was the point when Star Wars (1977) was the biggest thing to hit science-fiction/fantasy ever. This seems to have infected the conception of The Black Cauldron. However, by 1985 the genre had moved on and the film seems to be stuck in an immediate post-Star Wars time warp. Even though it is based on a much earlier series of children’s fantasy novels by Lloyd Alexander – The Book of Three (1964), The Black Cauldron (1965), The Castle of Llyr (1966), Taran Wanderer (1967) and The High King (1968), of which the film meshes the first two books – the film still rehashes the same elements that everyone was trying to copy immediately after Star Wars.

Thus we have the boy who dreams of being a warrior and is thrown into an epic adventure, the small innocuous creature with valuable information, the plucky princess (one of the film’s more stimulating characterisations), the evil skull-faced lord who strangles his own minions, even a copycat John Williams symphonic score. Disney are not even above plundering from themselves – notably the witches from The Sword and the Stone (1963), bits of Sleeping Beauty (1959) and the foreboding forests of Snow White and the Seven Dwarfs (1937).

Unfortunately, the cliches do not amount to a substantial enough working to make The Black Cauldron a particularly interesting film. The period 1966-1989 was largely an undistinguished wasteland for Disney animation and The Black Cauldron is one of their more forgettable ventures into feature animation. Of all modern era Disney films, The Black Cauldron is probably one that has been almost all but forgotten by the public.

Not to mention, the film also ended up being a box-office for the studio, only earning $21 million domestically – less in fact than Friday the 13th Part V: A New Beginning (1985). The studio tried to salvage this by renaming the film Taran and the Black Cauldron to no avail.