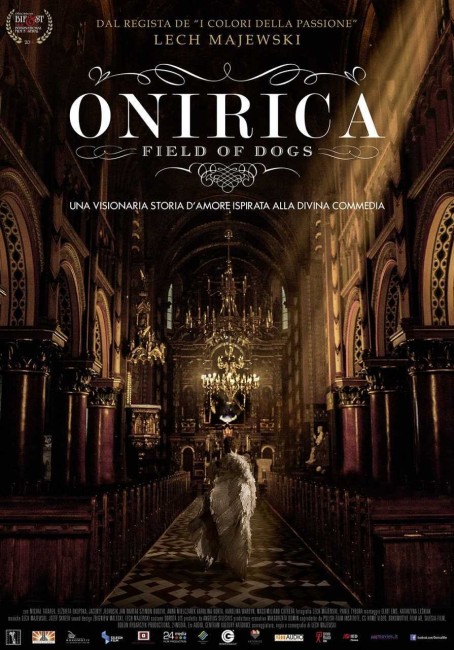 A young man Adam works a job as a supermarket checkout operator. He has suffered a car accident that killed his girlfriend and has left him with brain damage. This leaves him experiencing a series of hallucinations of the dead and the religious apocalypse.

Field of Dogs is a film from Lech Majewski, a Polish poet and painter and has been working on film since 1980. His earlier films are not so well known, although he has worked in the fantastic genre a number of times with efforts such as the mediaeval fantasy The Knight (1980), The Roe’s Room (1997) and Angelus (2000) about a cult and their prophecies coming true. Majewski was the writer and what was to have been the original director of Basquiat (1996). More recently, he gained attention with his arthouse and festival hit The Mill and the Cross (2010), which restages a painting by Pieter Bruegel the Elder in elaborate detail. Majewski subsequently went on to make the English-language Valley of the Gods (2019),

Majewski calls Field of Dogs the third in a triptych of films made from artworks following The Garden of Earthly Delights (2004) and The Mill and the Cross. Though the other two are based on classical works of art, Field of Dogs is based on Dante Aligheri’s epic poem The Divine Comedy (1308-21), which Majewski calls a work of art because it is so visual in nature. The Divine Comedy, one of the classic works of literature, comes in three parts that concern the narrator’s journeys through Hell, Purgatory and finally to Paradise (or Heaven). The section that The Divine Comedy is of course always known for today, except among literary scholars, is Inferno and the image of Hell as a realm of seven circles with punishments meted out to the damned.

Majewski says that his inspiration for the film was the events of 2010 in Poland, which included a heavy winter that beset most of the country due to Icelandic ash from the volcano Eyjafjallaj’kull in the sky, followed by the crash of Polish Air Force Tu-154, which killed most of the country’s parliament. (Some footage of this is screened later in the film here). His response was to think of how a mediaeval poet might perceive the happenings in terms of apocalyptic doom – an idea not unremniscent of Vincent Ward’s The Navigator: A Mediaeval Odyssey (1988), which does the idea of the Mediaeval view of the modern world with far more resonant potency.

For all that Majewski talks about Field of Dogs – a term that appears to have no relevance anywhere in the film – being a modern version of The Divine Comedy, Dante’s work bears almost nothing to do with the film aside from readings on the soundtrack throughout. I anticipated we would at least have a film where a protagonist undergoes a guided tour into the afterlife, which is what The Divine Comedy is all about, but this never happens.

What we have is a largely plotless surrealist work. Majewski creates a series of dreamlike visions – a bikini infomercial girl stepped out of Michal Tatarek’s tv; an old man with two harnessed bulls hand-plowing up the tiled floor of the supermarket; Tatarek having conversations with a dead friend who has a bullet hole in his head; people in formal dress slow dancing in the forest; the appearance of angels; the image borrowed from Tarkovsky’s The Sacrifice (1986) of two lovers coming together and floating up into the air; and the remarkable final image where a waterfall comes down from behind an altar and floods a church.

These are often striking and effective images. At the same time, Field of Dogs suffers from a complete lack of plot. The problem, from what I glean of Lech Majewski’s Q&A at the Vancouver International Film Festival, is that he has constructed the film as one might a painting – where the whole of the frame before us is a single image with many distinct elements to it. Majewski approaches his film like an art historian who asks his audience to look at the way the images intersect and discern deeper meanings. Alas, film is a more linear medium and demands crucial things like narrative and emotional engagement, something a painting does not. It is for this reason that Field of Dogs reads as a film of rich images but little beyond that.