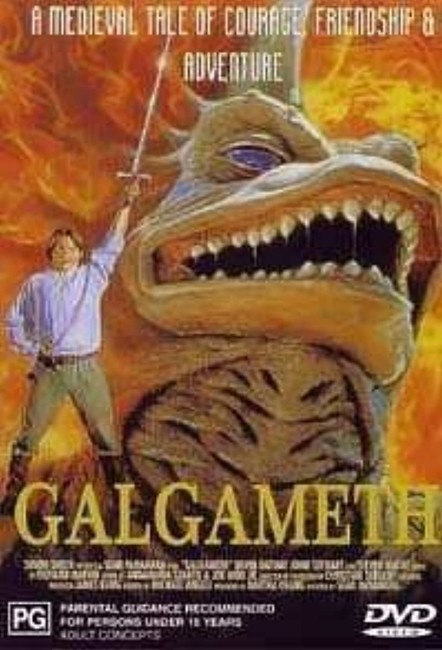 aka The Adventures of Galgameth

Henryk, the king of Donnigold, is poisoned by his adviser, the evil El El, after El El disagrees with Henryk’s plan to grant the people of the neighbouring kingdom of Lovania their freedom from Donnigold’s rule. After Henryk’s death, El El institutes a brutal regime in the name of Davin, Henryk’s son and the heir to the throne. When Davin discovers what is happening, he stands up but El El has him arrested. However, with the aid of Galgameth, a statuette that comes to life as a small creature, Davin makes an escape. He then joins the rebels of Lovania, who are unaware of his true identity, and unites them to try and overthrow El El. However, the rebels’ numbers are weak. Their only hope lies with Galgameth, which grows in size each time that it eats metal. And so they start feeding it more metal to make it grow to giant size and be able to take on El El’s troops and cannons.

Galgameth is a modest children’s fantasy film. It almost feels like an entry from one of Charles and Albert Band’s various production companies – Full Moon Entertainment, Moonbeam, Kushner-Locke – in that it is shot in Rumania and features many of the crew names that appear on the Bands’ Rumanian-shot productions, along with their longtime special effects contributor, stop-motion animator David Allen. Galgameth even has the look of a Band production – the Galgameth creature resembles a slightly more expressive version of some of the ultra-cheap puppet effects of Band regular Mark Rappaport.

None of this is actually the case – the film is instead made by an entirely different low-budget American company. It is directed by Sean McNamara, who has gone onto various other children’s films usually for video, including Casper: A Spirited Beginning (1997), Casper Meets Wendy (1998), Three Ninjas: High Noon at Mega Mountain (1998), the teen power-suit fantasy P.U.N.K.S. (1999), Race to Space (2001) about the friendship between a boy and a chimpanzee sent into orbit by NASA, Robosapien Rebooted (2013), Space Warriors (2013), Cats & Dogs 3: Paws Unite (2020), several Baby Geniuses sequels, the cinematically released Bratz (2007) and the modest hit of Soul Surfer (2011). (McNamara also plays the young hero’s father, the murdered king, in the film here).

For all its relatively unassuming horizons, Galgameth is passable effort. It does a decent job of disguising and making the most of its cheap production values. Sean McNamara does a competent job of suspending one’s disbelief in the fantasy kingdom milieu (although the conviction of the swordfights is somewhat undone by the fact that everybody is using swords with large, blunt flat blades). The story rehashes various sword-and-sorcery plot elements – the hero deposed from his rightful place as heir to the kingdom; the black knight/evil vizier usurper; the hero fighting his way back to reclaim his destiny; the prince-and-the-pauper theme of the hero rallying the peasants who do not realise his true identity. There are many similarities between the story here and The Sword and the Sorcerer (1982).

Young hero Devin Ottway has a brashness and a forcible American accent that intrudes; much better is the female interest Johna Stewart, who plays with a good deal more spunk than he does. The special effects trend to be very variable. The Gilgy creature looks dopey – indeed, what it resembles more than anything is Godzilla’s son from Son of Godzilla (1968). There is however one fine imaginative scene near the end, where it emerges as a giant glowing, fire-breathing creature, that briefly has a ferocity of imagination that the more cutsie scenes do not.