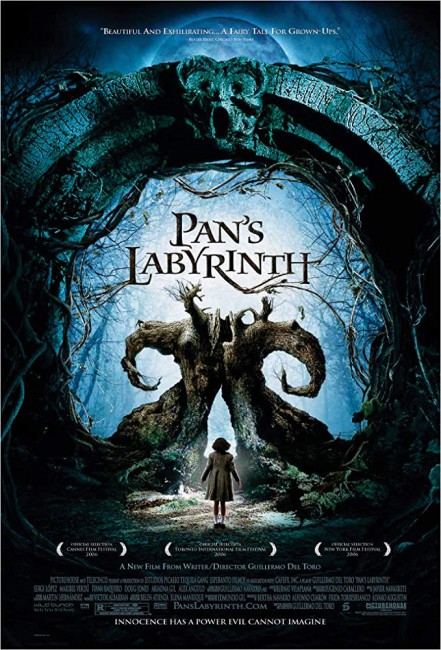 Spain, 1944, during the midst of the Civil War. Young Ofelia’s mother Carmen has married Captain Vidal, the head of a troop of Nationalist soldiers. Carmen is pregnant with Vidal’s son and encourages Ofelia to regard Vidal as her father. They travel to where Vidal and his troops are stationed in the countryside, engaged in hunting down the rebels hiding in the forest. While stopped on the way there, Ofelia comes across a stone shrine in the forest and is amazed when a praying mantis follows her home and turns into a fairy. The fairy draws Ofelia through a stone labyrinth in the garden and down into a magical underground realm. There she meets a faun that tells her that she is the Princess Moanna. The faun assigns Ofelia three tasks. Meanwhile, Ofelia’s mother falls increasingly ill with the pregnancy. The faun gives Ofelia a living mandrake root to place under her bed, which helps her mother regain her health. At the same time, Vidal captures and tortures several of the rebels and in so doing discovers that his doctor and a maid that has befriended Ofelia have been secretly aiding the rebels.

Pan’s Labyrinth was the one of the most successful arthouse released genre films in recent years. It was nominated at just about every critical and awards ceremony for Best Foreign Language Film of 2006 and made an unexpected win of three Academy Awards – for Best Cinematography, Best Art Direction and Best Makeup. The success of Pan’s Labyrinth had director Guillermo Del Toro, along with fellow Mexicans Alfonso Cuaron and Alejandro Gonzalez Innaritu whose respective films Children of Men (2006) and Babel (2006) accrued much critical attention the same year, acclaimed as part of a new Mexican Wave storming Hollywood.

For all his sudden discovery by the arthouse intelligentsia with Pan’s Labyrinth, Guillermo Del Toro has been making fantasy and horror films for more than a decade now – and with impressive results. However, with the peculiar thinking that goes into awards ceremonies, the fantasy genre was a ghetto that doesn’t count and it took until his breakthrough here for Guillermo Del Toro to be ‘discovered’.

Del Toro made his debut with the acclaimed Mexican-made vampire film Cronos (1993). He was brought to the US to make the monster movie Mimic (1997), went onto the immensely exciting Blade II (2002), which still remains his best film, and then the graphic novel adaptation Hellboy (2004) and its sequel Hellboy II: The Golden Army (2008). Del Toro seems to alternate these mainstream Hollywood productions with often personalized works designed for arthouse release, shot in Spanish language and usually backed by Spanish production companies. Here he had previously made the ghost story The Devil’s Backbone (2001), which, along with Pan’s Labyrinth and the announced title 3993, draws upon the Spanish Civil War as setting.

Pan’s Labyrinth is a natural successor to The Devil’s Backbone. Both are set around the Spanish Civil War and feature children as protagonists. In both films, the children are drawn into something supernatural that comes in direct contrast to a real world that is dominated by the harsh reality of political events. Critics compared Pan’s Labyrinth to everything from Alice in Wonderland (1865) to the Spanish Civil War quasi-fantasy The Spirit of the Beehive (1974). If anything though, Pan’s Labyrinth reads like a dark version of the recent big-budget The Chronicles of Narnia: The Lion, The Witch and the Wardrobe (2005) with its story about children venturing into a secondary world of magical creatures and where a faun becomes a girl’s close companion. You could even go as far as to see analogies between Ofelia eating the grapes and Edward’s temptation by Turkish Delight in The Lion, The Witch and the Wardrobe. Indeed, Guillermo Del Toro was apparently solicited for The Lion, The Witch and the Wardrobe but turned it down – he made the amusing comment in interviews that if he had directed the film he would not have resurrected Aslan. This seems to be the essence of Pan’s Labyrinth – it is a fantasy where all the nice, safe feelings and assurances of a fantasy like Narnia have been inverted, where the realm ventured into is not something wondrous but dark and threatening.

There are also a number of similarities to Labyrinth (1986) and MirrorMask (2005), which feature girl heroines on the cusp of adolescence who venture into a secondary fantasy world that allegorically mirror events in the real world. The end of Pan’s Labyrinth could be a darker variation on the parts of Labyrinth where Jennifer Connelly unwittingly sacrifices her brother, while there are also similarities to MirrorMask with the girl trying to deal with the flagging health of her mother back in the real world. Pan’s Labyrinth also makes fascinating comparison to two other films that came out around the same time, Terry Gilliam’s Tideland (2005) and Bridge to Terabithia (2007), which both similarly vied between an imagined fantasy world and harshly mundane realities.

Certainly, Guillermo Del Toro’s visions of the fantasique are genuinely striking. There are lovely images like the praying mantis insect that suddenly turns into a fairy. Especially striking is the scene where Ivana Baquero ventures down into the labyrinth via a chalk drawing that opens up a door in the wall where she must creep past a laden banquet table where sits a bizarre figure (the Pale Man) who has been stilled in motion and disconcertingly has no eyes, only two holes in its nose, where she disobeys orders and steal two grapes from the banquet, only to awaken the creature that starts coming after her, locating her through the eyeballs situated in its palms and biting the heads off her fairy companions as she races to draw a new door and escape back to her room.

However, I ended up somewhat disappointed with Pan’s Labyrinth. The problem had a good deal to do with both the critical/public reaction and the selling of the film. With Pan’s Labyrinth receiving so many awards as Best Foreign Language film of the year or being called the best fantasy film some people have ever seen, I fully expected to come out ready to rank it highly in this site’s Best of 2006 awards – but didn’t. The main problem is the way that Pan’s Labyrinth works as a fantasy film. In a problem that was also shared by Bridge to Terabithia, the promotional campaign for the film focuses on the creatures and gives one the expectation that they are going to see a fully developed secondary world fantasy a la Narnia, MirrorMask etc. However, Pan’s Labyrinth is a very different film to that – the bulk of the film (at least three-quarters of it) is focused on the real world happenings concerning Sergi Lopez’s Captain and the rebels in the forest. Just like The Devil’s Backbone, I came out of Pan’s Labyrinth unsure what kind of allegory that Guillermo Del Toro was trying to articulate.

In abovementioned works like Labyrinth, Narnia and MirrorMask, one is drawn into a complex secondary world of fully developed imagination. All of these are worlds that operate on their own rules. On the other hand in Pan’s Labyrinth, the bulk of the film’s focus is on the historical setting, not on the fantasy elements. We only get partial glimpses of the world of the Labyrinth and most importantly Guillermo Del Toro never explains any of the rules that this world operates on. Ofelia is bidden to do various things – go and use three stones to kill a giant frog that lives in the base of a tree, to venture down into the room of the Pale Man and not eat anything, that she must sacrifice the innocent blood of her baby brother. However, it is never clear why she must do any of these things other than the arbitrariness of the script saying that she must. Her quest never seems to have any bearing (directly or allegorically) on any of the events in the real world, which seems a failing of Pan’s Labyrinth as fantasy especially in that the bulk of the story is concerned with the Captain’s treatment of the rebels. We are also told Ofelia is the Princess Moanna but this has no connection to the rest of the story.

In fact, when the film reaches its end we are not even sure that any of the aspects of the Labyrinth are real or simply in Ofelia’s imagination. At the climax, she runs to the heart of the labyrinth and confronts the faun but when the Captain arrives and finds her there moments later he sees nothing, which suggests that the elements of the labyrinth are all in Ofelia’s head. Yet this is contradicted at other times and aspects of the labyrinth have a direct effect on the real world – Ofelia is able to pass between rooms using the chalked door; the mandrake root affects her mother’s health and she collapses as soon as it is destroyed. For all its claim as a great fantasy film, Pan’s Labyrinth is in fact an anti-fantastic film when it comes to the ending – one where Guillermo Del Toro seems to say that fantasy is only in the imagination and that no matter what magic lies in an alternate world (be it real or imagined), the brutality of the real world crushes everything.

Subsequent to the success of Pan’s Labyrinth, Guillermo Del Toro was connected to a host of projects, including The Hobbit movies for Peter Jackson, finally ending up with co-screenwriting credit on the finished trilogy The Hobbit: An Unexpected Journey (2012), The Hobbit: The Desolation of Smaug (2013) and The Hobbit: The Battle of the Five Armies (2014), and an adaptation of H.P. Lovecraft’s At the Mountain of Madness but both of these ended up in problems. He next went on to direct the giant robots film Pacific Rim (2013), the ghost story Crimson Peak (2015) and the amphibian man romance The Shape of Water (2017), which won Del Toro an Academy Award as Best Director, and the fake clairvoyant film Nightmare Alley (2021).