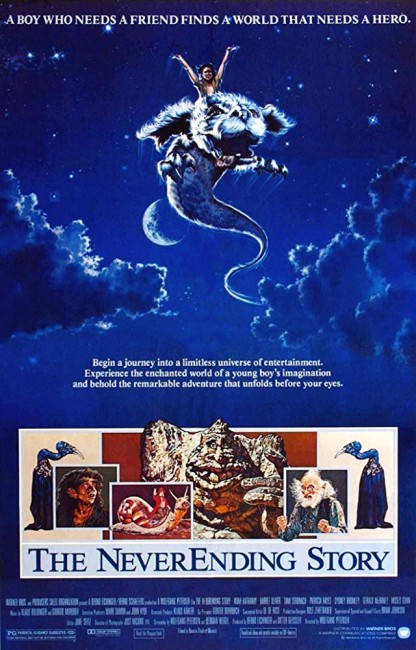 Young Bastian is unhappy, still grieving over the death of his mother. He is harassed by bullies and berated by teachers for dreaming in class instead of doing work. This is treated unsympathetically by his father. Fleeing from the bullies, Bastian hides inside a bookstore. There his curiosity is piqued by a book called ‘The Never Ending Story’ but the storeowner warns him that the book is too dangerous and forbids him from reading it. And so Bastian steals the book and hides in the school attic to read it. In the story, he becomes enwrapped in the plight of the kingdom of Fantasia, which is being devoured by the vast void of Nothing. The only hope is the boy warrior Atreyu who sets out on a peril-laden journey to save the world. Atreyu’s only means of saving Fantasia comes in his communicating with the reading Bastian.

This fantasy epic was the most expensive film ever made in West Germany at the time it was made. It proved to be a modest success in the West when released. It was directed by Wolfgang Petersen who had just come from the huge international success of his WWII U-boat drama Das Boot (1981). Petersen adapted the film from a popular young adult novel The Neverending Story (1979) by German fantasy writer Michael Ende.

The Neverending Story was clearly intended as a German entry in the wave of sf/fantasy films that began with Star Wars (1977). It tries hard to imitate its more expensive American cousins – and does so successfully on most counts. There is an appealing menagerie of creations – racing snails, giant wolves, mushroom creatures, giant talking turtles. Particularly original is the kindly tricycle-riding giant Rock Biter.

The sole-exception is the Luckdragon, which is far too cute and only looks like a giant flying puppy dog. Much of the effects work is also considerably underset by thick matte lines – uncharacteristically poor work from Brian Johnson who supervised the sterling effects sequences on tv’s Space: 1999 (1975-7) and headed Industrial Light and Magic for The Empire Strikes Back (1980) and Dragonslayer (1981).

The film comes with an interesting level of meta-fiction wherein the book being read starts to interact with the reader. The journey within the story is clearly an allegorical one – through the Swamps of Sadness; the world being swallowed up by The Nothing, which is metaphorically vague enough to represent everything from apathy to the death of the imagination. However, this is a concept that is blunted somewhat by being seen on film rather than the written page where the meta-fictional nature of the idea would have had much more potent effect. Furthermore, the potential of the idea is only played out in the blandest way possible.

In the novel, Michael Ende had the book’s story a mirroring of the hero’s growing up, with the end being his eventual returning to the real world ready to face it as an adult. The film seems to reverse these metaphors – only half of the book is adapted for one – and the film instead reaches an astonishingly banal ending where the hero materialises his luckdragon out of the book to deal with his tormenting bullies. It is an ending that doesn’t arrive with the merging into adulthood, rather one that holds merely the transposition of a banal comeuppance fantasy over the real world. In fact, it is a surprise that parental groups never jumped on some of the film’s messages – that it seems to support stealing, bunking school and retreat into escapist fantasy as a way of dealing with life’s problems. (Ende absolutely hated the film adaptation).

The Neverending Story is a film that sits just between the imaginative and the mawkish, at worst exemplified by the ghastly disco score from Giorgio Moroder and the infuriatingly insipid pop song by 30-second wonder Limahl. The single most irritating aspect of the film is the casting of Noah Hathaway, who previously played the kid on tv’s Battlestar Galactica (1978-9). Hathaway gives an awful and brattish performance that could charitably be called wooden. Faring far better is Barret Oliver from Cocoon (1985) and D.A.R.Y.L. (1985) who has all the credibility and charm that Noah Hathaway lacks. It leaves one disappointed that Barret Oliver did not end playing Atreyu as well – there is no reason on the face of it why he couldn’t have and he would have made a far more sympathetic, less wooden character than Noah Hathaway does.

Director Wolfgang Petersen later went onto a career as a director in the American mainstream with the high-profile likes of In the Line of Fire (1993), Air Force One (1997), The Perfect Storm (2000), Troy (2004) and Poseidon (2006). His other genre films have been the intergalactic buddy film Enemy Mine (1985) and the Ebola film Outbreak (1995). Petersen also produced the killer psychologist film Instinct (1999) and the cute android film Bicentennial Man (1999).