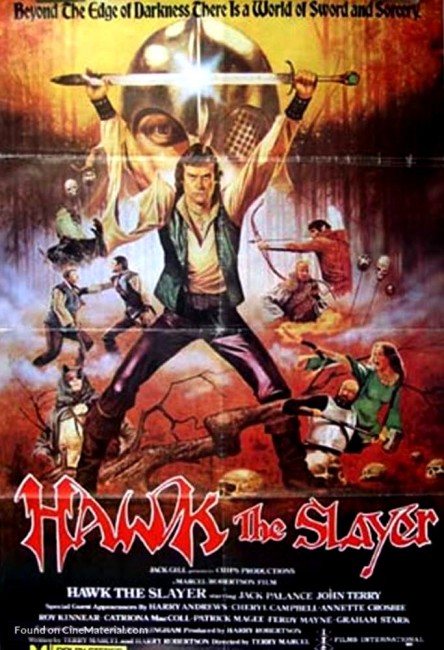 The evil Voltan, who hides his disfigured face behind a steel half-mask, demands that his father the King show him the source of his power then kills him when he refuses. As he dies, the King gives his other son Hawk the source of the power that Voltan seeks – his sword and the elven mindstone that gives the wielder mental control over it. Now, years later, Voltan takes the Abbess of Caddonbury hostage and demands two thousand pieces of gold as ransom. When the church refuses to pay, the Abbess’s people ask the help of Hawk. And so, Hawk gathers a ragtag band of adventurers – a giant, an elven archer and a dwarf – to stop Voltan.

Hawk the Slayer was an early entry in the brief early-1980s sword-and-sorcery stakes. Indeed, it was the first entry in the genre, coming out just before the fad peaked with the likes of Excalibur (1981) and Conan the Barbarian (1982).

Hawk the Slayer has been undeniably made on the cheap – all the sets are outdoors, none of the villages or towns are ever depicted. The effects are down around the level of the average 1970s episode of Doctor Who (1963-89) – all shabby coloured and flashing lights, cheap animation effects and phosphorescent snowstorms, and a very silly magic sequence where soldiers are disposed of by Silly Putty.

There is little to the plot. Potentially interesting are the band of sidekicks – an elf, a dwarf and a giant – standard fantasy archetypes but which fantasy cinema had yet to tap for its own ends at that point. However, any potential interest here is traded for lowbrow humour. Director Terry Marcel overuses slow-motion camerawork with tiresome effect and adds an entirely anachronistic synthesizer score.

The worst thing about the film though is the ludicrously campy performance from Jack Palance who grandly chews the scenery with the peculiar brand of asthmatic villainy he mastered that requires he take a breath in between every syllable.

Director Terry Marcel later returned to the sword and sorcery genre with the alternate dimension film Prisoners of the Lost Universe (1983) and then made the campy adventure film Jane and the Lost City (1987), adapted from the popular newspaper strip.