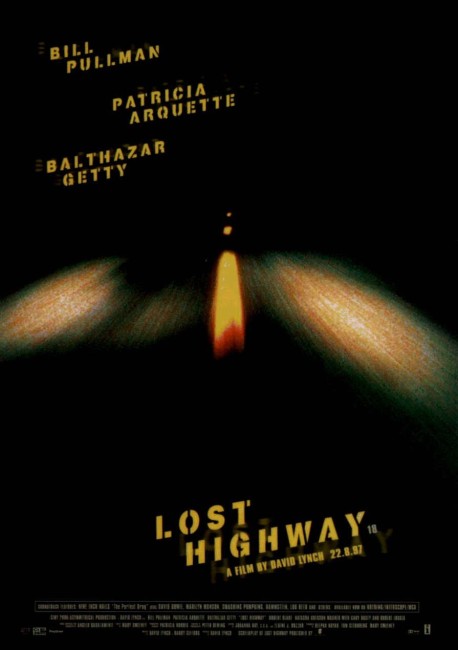 Saxophonist Fred Madison and his wife Renee are troubled by a series of mysterious packages left at their door. Each package contains a videotape that shows someone entering their house and filming them while they sleep. At a party, Fred meets a mystery man who insists he is at Fred’s house right at that moment – and to prove it calls the house where his other self answers the phone. Fred then receives a videotape of himself standing over Renee’s slaughtered body. He abruptly comes around to find himself sentenced to the electric chair for her murder. Prison authorities then inexplicably find mechanic Pete Dayton in Fred’s cell and Fred nowhere to be found. Baffled, they are forced to let Pete go. Pete returns to work but becomes drawn into the schemes of the mobster Mr Eddy. There he is attracted to Mr Eddy’s girlfriend Alice Wakefield who bears an uncanny resemblance to Renee.

Lost Highway was David Lynch’s first film in five years, breaking the long absence following the critical drubbing and financial failure of Twin Peaks: Fire Walk With Me (1992). Lynch’s return had been long awaited but Lost Highway opened to heavily divided reviews. (Indeed the international promotional campaign triumphantly boasted the negative reviews as part of its advertising). Whatever the reviews may differ about, the one thing they seemed to agree about was that Lost Highway was completely incomprehensible.

Lost Highway starts out as a near great film. Lynch hooks one with the bizarre goings-on – the series of videotapes that keep intruding further and further into Bill Pullman’s life. And there is an amazing sequence where Bill Pullman encounters white-faced Robert Blake at a party – Blake insists they have met before, Pullman says he doesn’t think so, Blake says it was at Pullman’s house and “as a matter of fact I’m there right now” and pulls out a cellphone to prove the point, getting Pullman to dial his home number whereupon Blake’s voice tells him “I told you so.”

Lynch evokes an sense of unbearable ominousness throughout. The scenes in Bill Pullman and Patricia Arquette’s apartment with its bare modernist walls, low lighting and patches of heavy shadow evoke a sense of dread out of which it seems anything might emerge.

Thereafter however David Lynch loses the plot altogether. Quite literally. Lost Highway becomes a completely different film. Bill Pullman is jailed for murder and inexplicably changes into Balthazar Getty and the film takes up a new plot altogether. Everything regarding the murder of Patricia Arquette and the mystery man videotaping things is dropped completely. Lost Highway then turns into what starts to seem like a film noir piece with Balthazar Getty becoming involved with mobster Robert Loggia and conducting an illicit affair with Loggia’s girlfriend (who is also played by Patricia Arquette) and becoming drawn into her plot (which may not be all it seems) to do someone in and steal money so they can run away together.

Lost Highway could almost be called David Lynch’s version of Alfred Hitchcock’s Vertigo (1958) – if one can accept a Vertigo where the film is not concerned whether the two women are the same or not, and where the hero and the entire plot change at the same time! (Lynch claims, for instance, that Bill Pullman’s character was inspired by watching the O.J. Simpson trial, which makes a surprising amount of sense). Lost Highway has all the elements for a classic film noir thriller – only David Lynch doesn’t seem interested in the thriller aspect of it. At the point where Balthazar Getty and Patricia Arquette become involved in the murder, any other film would have used the opportunity to start putting the screws on an audience – but Lynch is not even interested in what happens and heads off into baffling incomprehensibility.

As to the ending, what is going on could be anybody’s guess – even Lynch’s, he having admitted he is as baffled by what the film means as the audience. The trouble with David Lynch is that his last few directorial efforts – the final episode of Twin Peaks and the whole of the revival series, Twin Peaks: Fire Walk With Me, this and the subsequent likes of Mulholland Dr. (2001) and Inland Empire (2006) – show him charting a clear course away from anything approaching narrative coherence into a violent, intensive and chaotic surrealism. Unfortunately, none of it appears to mean anything.

One has no problem with surrealism but surrealism usually means something – either in terms of shock juxtaposition of imagery or a connecting symbolism that lies beneath the surface. Or else it leaves one dazzled at its daring in leaving things unexplained, as in Blow Up (1966) or The Picnic at Hanging Rock (1975). There are no films that are more daringly incomprehensible than Lynch’s own Eraserhead (1977), but the brilliance of Eraserhead was not its confusion but rather its creation of a world of seeming dream logic and a self-contained universe that made its own sense. Surrealism usually signposts what it is doing – if it confuses, it achieves brilliance by signposting its defiance of traditional expectations of plot coherence. Lost Highway on the other hand is none of these. It is like a roomful of staircases all leading nowhere.