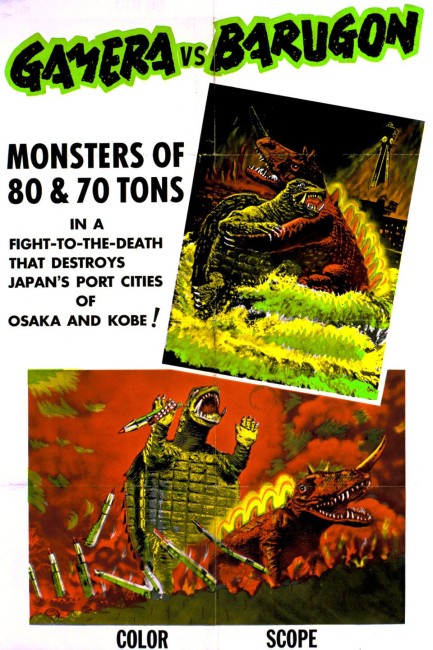 aka Duel of the Giant Monstes: Gamera Vs. Barugon; War of the Monsters

The capsule that has been sent into space containing Gamera is struck by a meteor. Freed, Gamera makes a return to Earth. Meanwhile, pilot Keisuke Hirata quits his job and joins two other men on an expedition to New Guinea organised by his brother Ichiro. While there during the war, Ichiro discovered a massive opal and hid it in a cave to retrieve later. As they arrive, the natives in the nearby village plead with the men not to go to the cave but they ignore this. In the cave, Keisuke is bitten by a scorpion, while the treacherous Onodera snatches the opal and detonates explosives to bury the others. Despite this, Keisuke survives and is nursed back to health in the village where he is told that the opal is actually an egg. On the return voyage, Onodera uses a heat lamp but this causes the egg to hatch. The ship is destroyed as the monster Barugon emerges. Barugon rampages through Kobe, causing mass destruction with its freezing breath and rainbow energy beam. As everything the military use to try to stop Barugon proves ineffective, the only hope appears to be Gamera.

Gamera was always a copycat of Toho’s Godzilla, albeit played much more down to juvenile audiences. The first film Gammera the Invincible (1965) had enjoyed reasonable success. In quick course, the studio Daiei made a string of sequels beginning with Gamera vs Barugon here and followed by Gamera vs Gyaos/Return of the Giant Monsters (1967), Destroy All Planets (1968), Attack of the Monsters/Gamera vs Guiron (1969), Gamera vs Jiger/Gamera vs Monster X/Monsters Invade Expo 70 (1970), Gamera vs Zigra (1971) and Gamera: Super Monster (1980). The series was revived in the 1990s with very impressive results by director Shusuke Kaneko with Gamera, The Guardian of the Universe (1995), Gamera 2: Assault of Legion (1996) and Gamera 3: Revenge of Iris (1999), while there was also a subsequent film with Gamera the Brave (2006).

When it comes to the first of their Gamera sequels here, Daiei do exactly what Toho did in their first Godzilla sequel Gigantis the Fire Monster (1955) and every single one thereafter – that is to say, they add another monster to the mix and the film culminates with a showdown between the two monsters. It took Toho four films before they came up with the idea of making Godzilla into a good guy but Daiei do so with Gamera’s second outing – although they are probably just taking their lead from Toho who made the switch-over a couple of years earlier with Ghidrah the Three-Headed Monster (1964).

Gamera vs Barugon is a surprise to come to after seeing a number of the other 1960s/70s Gamera films, which usually set a fairly low bar in terms of effects in comparison to the Godzilla series. The first noticeable thing is that this comes in colour as compared to its black-and-white predecessor. While the other Gamera films of this period made a pitch to kids, this takes itself seriously.

The first 45 minutes of the show is played as an adventure film with no monsters present. Even then, Gamera only makes a single appearance at the start in a prologue showing how it survived the launch into space and one scene where we see it return to Earth and attack a dam.

Thereafter it is not until the one-hour point when we see Gamera again where it turns up for a fight with Barugon and then nothing more of it until the big climactic battle. In fact, it should be said that there is more focus on Barugon than there is Gamera – it is as though Gamera were an afterthought or Daiei didn’t have a full grasp on what to do with Gamera as a protagonist. It is certainly a better try than most of the other Gamera films of the era but Daiei still haven’t quite gotten to the polished level that Toho had with their monster movies during this period.

Even though the film is in colour and a certain amount of effort is being made in the adventure scenes, the effects are still the weaker ones that dogged all the 1960s/70s Gamera films. The mass destruction is variable, while the models frequently look obvious. What kills the film is when it comes to Barugon who has ridiculous cartoony eyes that leave you unable to take it seriously whenever it turns up. One of the more WTF features that Barugon has is the ability to sprout energy rainbows from its back.

Gamera vs Barugon is available in several different editions – the original Japanese version runs to 101 minutes but in the US release, where it was retitled War of the Monsters, this was cut down to 88 minutes. The restored version available today runs to 106 minutes.