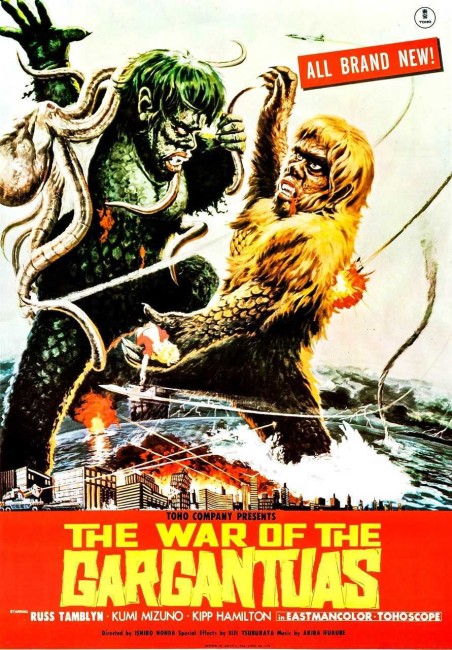 A monster emerges from the ocean and begins attacking shipping and then moves on into the city, causing mass destruction. Dr Paul Stewart is brought in because it is believed that this is the Frankenstein monster that was created in his laboratory. He is certain that Frankenstein is a peaceful creature and would not harm people. As the military try to repel the monster, Stewart’s Frankenstein appears from the mountains and rescues it. It is realised that the attacking creature (Gaira) may have been one that was created when cells from their Frankenstein (Sanda) were washed out to sea and mixed together with plankton. As Gaira continues its rampage and nothing the military brings to bear seems able to stop it, this pits the two monsters against one another.

Ishiro or Inoshiro Honda (1911-93) was the creator of Godzilla. Honda directed the very first Godzilla film, Godzilla, King of the Monsters (1954), and most of the sequels over the next decade and a half. Honda seemed to find his calling in the kaiju eiga and made numerous entries in the genre, including Rodan the Flying Monster (1956), Varan the Unbelievable (1958) and Mothra (1962), all of which eventually came to be paired off against Godzilla.

One of Honda’s stranger monster movies was Frankenstein Conquers the World (1966) based around the bizarre premise of the heart of the Frankenstein monster being caught in the atomic explosion at Hiroshima and giving birth to a giant-sized boy who eventually ends up fighting the monster Baragon. (Baragon later became incorporated into Toho’s monster bashes too). War of the Gargantuas is a sequel to Frankenstein Conquers the World. As was the case with many of the 1960s Japanese monster films, an American name star – Russ Tamblyn who was then seen as a minor matinee idol – was imported to sell the film internationally.

War of the Gargantuas is a fairly typical Japanese monster movie of the era. There are all the hallmarks of one of Ishiro Honda’s films – the stolidly colourful action; the lack of real human content; the cheaply colourful effects with men in rubber suits battling it out. This is a film that seems far more enthusiastic about the scenes of the military moving into operation, shooting at things with a massive outlay of artillery, setting up electrical transformer devices and placing giant sparkplugs into a river – than it invests anything in the perfunctory scenes between the two leads Russ Tamblyn and Kumi Mizuno.

The effects are generally colourful, although frequently fall down when it comes to the shabby model ships that we see in the opening scenes or those with Gaira throwing around very unconvincing model tanks and batting down helicopters. There are however some entertaining scenes like with Gaira attacking Hanada Airport, loping across the runway and reaching through windows to snatch a woman up in its paw or later grabbing and devouring a singer in a nightclub. This undeniably reminds of King Kong (1933), which Honda had notedly paired up against Godzilla earlier in King Kong Vs. Godzilla (1962) – especially the scene where the good Frankenstein monster saves Kumi Mizuno from a fall by catching her in in his hand. The creatures have certainly become more ape-like than they were in Frankenstein Conquers the World. The film reaches an entertaining climax with the two monsters fighting, toppling buildings and then heading into the water and bashing each other with entire ships, before being devoured in a volcano that conveniently just pops up out of the ocean.

War of the Gargantuas exists in different forms. The US version of the film, which runs four minutes longer than the Japanese version, was taken over by producer Henry Sapirstein who removed all reference to Frankenstein monsters and has them called merely brown and green Gargantuas. In this version, Russ Tamblyn’s scenes are also re-edited so that it appears he is present in events more crucial to the film.