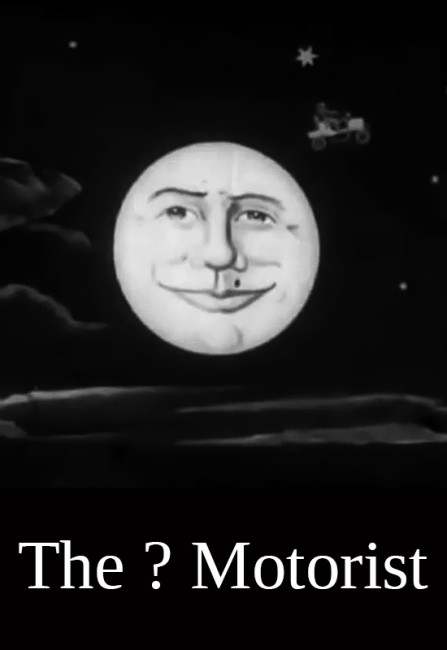 A car travels so fast that it heads up the side of a building, through the sky and into space where it circles the Moon and the rings of Saturn before returning to Earth.

British filmmaker Walter R. Booth was one of the early film pioneers. Booth made numerous trick special effects films in a career that started in 1899 – soon after the Lumiere Brothers made the first film – and lasted until 1918, during which time he made some 165 short films. Booth was inspired by the films of his much more famous contemporary Georges Melies. He copied and experimented with many of the special effects techniques that had been invented by Melies – assorted optical trickery like mattes, superimpositions, stop-action cuts and the use of miniatures. In particular, The ? Motorist seems like a copy of Melies’s more elaborate An Impossible Voyage (1904) in which a multi-vehicle combination took off from the Alps and flew through space. Booth creates fairly much the same sort of film here, albeit with far less elaborate effect than Melies did.

Certainly, the scene where a car of the era is driving along at (what must have been for the day) a breakneck speed, charging past and bowling over police officers and then in one amazingly surreal effect that still takes the breath away today, heads towards a shop front and instead of crashing through, drives straight up the side of the building and into the sky, is wonderful. The most charming scenes are where we see the car gracefully passing through the clouds, riding up and down each of them as though they were gently rolling hills, and then conducting a 360 degree circle around the circumference of The Moon (which has a face) and flying on to land on the rings of Saturn, conducting a circuit around them, before returning back down to Earth.

Although The ? Motorist is often read as an early work of science-fiction, it exists more in the realm of fantasy – just as in Melies’s films, The Moon has a face; nor is there any science-fictional explanation offered as to why the car suddenly develops the ability to fly. One is not sure to what extent it was known by the general public back in the 1900s that space was an airless vacuum (it was only 1905 when Albert Einstein published General Relativity and displaced the notion that space was composed of something Victorian scientists referred to as the aether) so there is probably no point jumping on the film for the idea of two motorists driving through space without an enclosed vehicle or any kind of breathing gear. More than anything, the film seems to have been created as an absurdist comic whimsy about the new arrival of the motor vehicle and the consequent fad for motorised speed. Given the film’s brevity, the results are quite charming.

The effects of the era were not particularly sophisticated – a large part of this is due to the fact that many of the techniques were still being invented and perfected as filmmakers went along. There are some passable travelling mattes as the car is seen flying through the sky, although the process is so primitive that it makes the car look as though it has been animated. The opticals are particularly poor and mismatched during the scene where the car crashes down through the ceiling of a courtroom and then drives off, where the result makes the car and motorists inside seem no higher than the various lawyers’ waists.