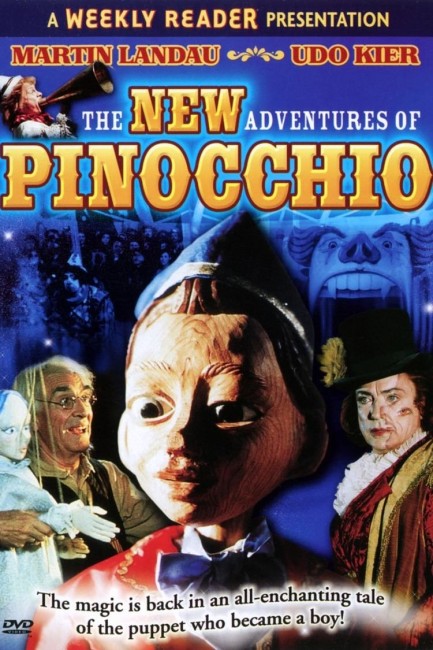 Now a real boy, Pinocchio and his best friend Lampwick bunk school and go to the circus Carnevale Nero where they witness Madame Flambeau selling a magic potion. When Pinocchio returns home, he finds that Gepetto has fallen ill. He realises that the only way to help Gepetto is to return and beg some of Madame Flambeau’s magic potion. As her price, Madame Flambeau requires Pinocchio and Lampwick to sign contracts to work for her. Agreeing, Pinocchio returns with the potion and gives it to Gepetto. However, when he wakes in the morning, Pinocchio finds that the potion has turned Gepetto into a puppet. Madame Flambeau, who reveals that she is the widow of Lorenzini, then demands that Pinocchio fulfil the contract whereupon she makes he and Gepetto perform as her prize exhibits in the circus.

The mistake made by The New Adventures of Pinocchio is in replacing the first film’s director Steve Barron with Michael Anderson, a British director who has been working since the 1950s and has racked up a number of genre credits but in all cases treats the material with a leaden clod-hand that seems to render it with the most unimaginative treatment possible. See the likes of Doc Savage –The Man of Bronze (1975), Logan’s Run (1976), the tv mini-series adaptation of The Martian Chronicles (1980) and the excruciating softcore Adam and Eve comedy Second Time Lucky (1984). (See below for a full list of Michael Anderson’s genre credits).

Carlo Collodi’s Pinocchio (1883) is a magnificent work. Originally written for a newspaper, it is more correctly a serialised set of stories than a book. However, rather than return to Carlo Collodi and draw upon some of the adventures that have never been filmed, The New Adventures of Pinocchio only unimaginatively shuffles about the elements from The Adventures of Pinocchio – bringing back Lorenzini to act as the villain, along with the supporting characters of the fox and cat Felinet and Volpe. The film does introduce an equivalent of the Blue Fairy – although this was a character that was created by the Disney version Pinocchio (1940), not one that comes from Carlo Collodi. Rather than sending Pinocchio off on a new adventure, the plot merely circles around placing twists on the original – Lorenzini’s potion turns Gepetto into a puppet this time and Pinocchio’s moral difficulty becomes the devil’s deal he must conduct to help Gepetto. The title The New Adventures of Pinocchio should more accurately have been termed Fairly Much The Same Old Adventures of Pinocchio. It should be noted that throughout the film, Pinocchio remains a ‘real boy’ rather than a puppet, although does briefly revert towards the climax.

The Jim Henson Creature Workshop turn out some decidedly sub-par work when it comes to the puppets. These are probably passable for a low-budget video release but some shots, especially when the creatures are seen moving in full figure, look extremely obvious. It is notable that when it comes to the puppets, the film is not using CGI effects this time but animatronics. The one CGI effect, the cricket Pepe, looks decidedly poor. Other effects like the sea donkey puppet are extremely weak with the bottom half of its body remaining hidden inside a barrel throughout. There is also some poor makeup on Udo Kier after he is transformed into a sea monster. As usual, Michael Anderson has remarkably little aptitude for fantastic material – one scene where a talking fish leaps out a window and goes for a cart ride seems mind-bogglingly mismanaged and should have been consigned to the editing room floor.

Martin Landau, who gave a great performance as Gepetto in The Adventures of Pinocchio, is largely sidelined and replaced by a puppet throughout. Udo Kier comes to centre stage where he is outfitted in drag and dominates the show with his penchant for bizarre performances. As the kid playing Pinocchio, Gabriel Thomson has a cleanly polished smile and earnest niceness that seems all dental surgery rather than acting.

Michael Anderson’s other genre films include:- an adaptation of George Orwell’s 1984 (1956); The Shoes of the Fisherman (1968), a political thriller concerning a near-future Pope; Doc Savage –The Man of Bronze (1975), based on the pulp hero; the dystopian sf film Logan’s Run (1976); the killer whale film Orca (1977); the psycho-thriller Dominique (1978); the tv mini-series adaptation of Ray Bradbury’s The Martian Chronicles (1980); Bells/Murder by Phone/The Calling (1981) about killer telephone calls; the excruciating Adam and Eve softcore comedy Second Time Lucky (1984); the John Varley time travel film Millennium (1989); and the tv movie remake of 20,000 Leagues Under the Sea (1997).