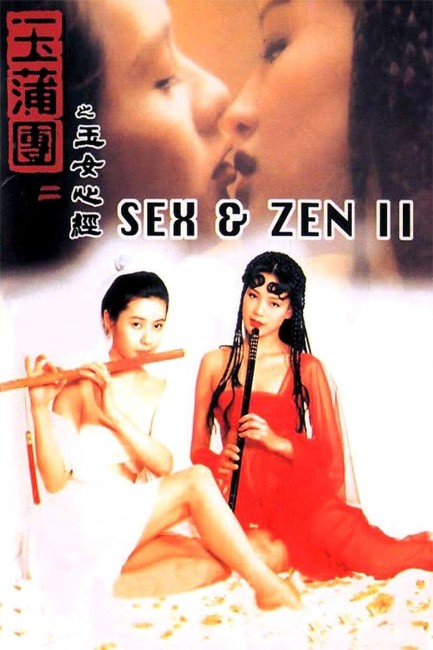 Saimun Chien is a follower of Zen sex secrets and believes it is his right to take the wife of any villager as his. His daughter Yaiu wants to go to school so he insists that she dress as a boy and wear chastity armour that will mutilate the hands and genitalia of anybody who touches her. At school, Yaiu is attracted to Fatau but he has his penis shredded by the armour when he discovers she is a girl. They travel to the scholar Happy Taoist who offers Fatau a mechanical prosthesis as replacement. Happy Taoist is then killed by the mysterious Mirage Lady in order to obtain a book of magic called ‘Secrets of Virginity’, which can allow her to change her appearance and devour her partner’s essence. So disguised, Mirage Lady becomes Yaiu’s idiot brother Lung’s bride and then starts devouring all of Chien’s wives.

Unfortunately, while Sex & Zen II aspires to be a part of the Hong Kong Wu Xia cycle, it does not appear to have the budget to allow its swordplay to shine. There is one extraordinary image of one of the wives being snatched up and raped by a demonic figure who flies through space on an organic-looking chair, which fails badly through not having the budget to pull it off.

The one point that the film does transcend itself is at its ‘climax’ that features the heroine being raped by the sorcerer villain – who is now a woman with a penis – which becomes a competition between the two as to who can hold off achieving their orgasm the last and in so doing devour the other’s life essence.