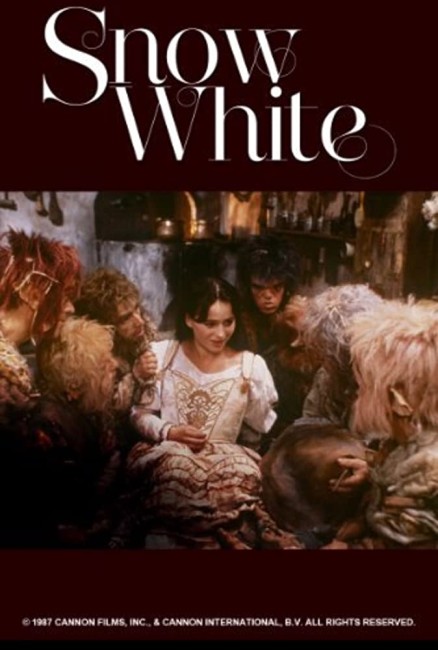 A prince comes upon the body of a beautiful girl kept in a glass coffin in the woods. The seven dwarfs who guard the coffin tell the girl’s story:– The girl Snow White was born to a good king and queen. However, the good queen died soon after and the king remarried an evil queen. The evil queen was obsessed with being the most beautiful in the land. When the queen’s magic mirror told her that Snow White was more beautiful than she was, she had a hunter take Snow White out into the woods and kill her. Instead, Snow White persuaded the hunter to let her go. She travelled through the woods until she came upon the cottage of seven dwarfs who happily accepted her into their midst. When the evil queen learned that Snow White was still alive, she plotted to kill her.

Snow White is one of the Cannon Movie Tales – various film adaptations of classic fairytales conducted by producers Menahem Golan and Yoram Globus who ran the Golan-Globus company, which produced a good many cheap action films during the 1980s. All of Cannon’s other Movie Tales (see below for other titles) are cheap and grotty. It is with some surprise that Snow White emerges reasonably well and is in fact the best of the Cannon Movie Tales.

For once, Cannon’s usually cheap production values are well employed and within these constraints the film creates some modestly imaginative sets. There are even times when Snow White is well directed – the Stepmother’s end where she becomes a mirror and shatters like glass is one particularly imaginative touch. The songs are lively and listenable.

The film certainly draws upon the Disney Snow White and the Seven Dwarfs (1937) – it even conducts a live-action approximation of the Disney enchanted forest, although unlike the Disney version this film suggests a magic by contrarily focusing on the naturalism and realism of all the bunnies hopping and animals frolicking in the woods. The film takes a downturn with the introduction of the Seven Dwarves who promptly become engaged in slapstick pratfalls.

Diana Rigg is top-lined as the Wicked Stepmother and well suited to the part. In later years, Diana Rigg became a Grand Old Dame of the English stage and her characteristically arch delivery is well suited to such a theatrical role as the Wicked Stepmother. The costume changes she goes through, which include the likes of a giant ginger broom headdress and what looks like a brass axe atop her head, are eye-catchingly bizarre.

The middle of the film is dramatically padded out with the Wicked Stepmother’s contrived schemes to kill Snow White off by adopting a series of bizarre and horrendous racial disguises (a point where one is unsure whether the film is trying to be kitsch or is simply downright bad), which are foiled by a series of even more improbably contrived reasons whereby the dwarves manage to pull the poisoned item out. Ignominiously, Snow White is revived not by the prince’s kiss but when her glass coffin falls off the cart and the jolt knocks the piece of poison apple out of her mouth (although, in the film’s favour, this is in fact how Snow White is revived in the original fairytale).