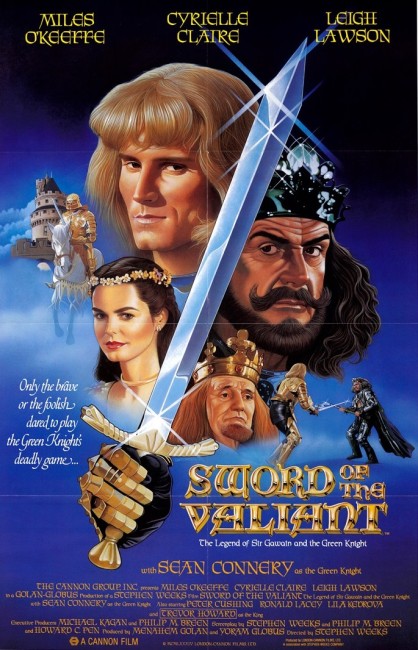 aka Clash of the Swords

As King Arthur’s court gathers for the Yuletide feast, The Green Knight appears, offering a challenge to any knight who can decapitate him in one blow – although if they fail the Green Knight may claim their head. However, the knights have become apathetic and only the young apprentice Gawain is willing to step forward, being quickly knighted by Arthur so that he can accept the challenge. He succeeds in decapitating the Knight – only the Knight is a magician and is able to pick up his severed head and put it back on. Gawain begs for his life and so the Green Knight gives him a riddle to solve and one year in which to do so before his head is forfeit. Gawain sets forth on a quest to find the answer.

This was one of a host of films that came out following the success of Conan the Barbarian (1982) and seeking to exploit the new fad for sword-and-sorcery. Though English-shot, it was produced by American-based Israeli producers Menahem Golan and Yoram Globus who operated the Cannon Films distribution chain. During the 1980s, Golan and Globus made an awful lot of Chuck Norris films and Charles Bronson action films and several other ventures into the sword-and-sorcery cycle, notably the Italian-made Hercules (1983), The Seven Magnificent Gladiators (1985), The Barbarians (1987), Gor (1987) and Masters of the Universe (1987).

Sword of the Valiant comes from a more venerable source than most of the other sword-and-sorcery films made around the time – in this case, an epic poem that was originally written in the 14th Century, author unknown. Interestingly, director Stephen Weeks had previously made an adaptation of the story with the obscure Gawain and the Green Knight (1973), starring singer Murray Head as Gawain. In fact with Sword of the Valiant, Weeks has simply remade the 1973 film and seemingly even reused the same script, retaining the same elements (such as the mythic land of Lyonesse) that he added to the story the first time around.

The film is an entirely average entry in the sword-and-sorcery sub-genre. Stephen Weeks manages a competent airing of the story in places. The middle tends to get patchy and drag through a lot of episodic set-pieces most of which are not present in the original poem. The film’s budgetary shortcomings show through in some occasionally tatty sets but Weeks at least covers things with a self-effacing, if distractingly modern, sense of humour.

The likes of Sean Connery and John Rhys-Davies seem to be struggling to keep straight faces. Certainly, the sight of Connery in green face paint and leaf-bedecked wig provides a good deal of unintentional camp value. Miles O’Keeffe, previously seen as Tarzan in Tarzan the Ape Man (1981), does okay with the role despite a thoroughly unconvincing wig. In subsequent rescreenings today, the film has gained a bad movie reputation.

Director Stephen Weeks was a minor director on the outskirts of the English horror scene where he also made the likes of the Dr Jekyll and Mr Hyde adaptation I, Monster (1971) and Ghost Story (1974).