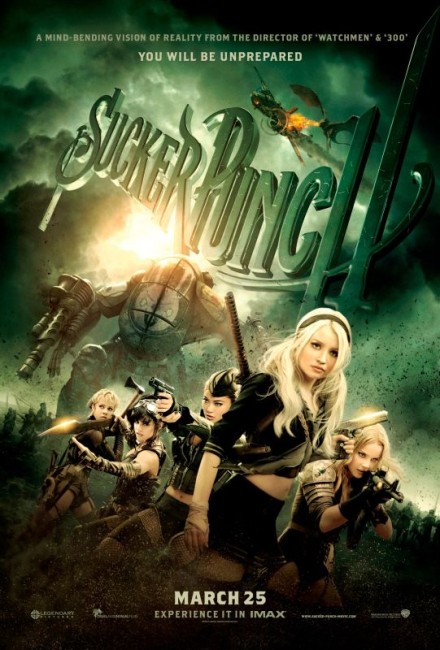 After the death of her mother, Baby Doll and her sister are placed in the custody of her cruel and abusive stepfather. In trying to stand up to him, Baby Doll picks up a gun but accidentally shoots her sister. Her stepfather has Baby Doll incarcerated in the Lennox House psychiatric institution in Battleboro, Vermont where she overhears him bribing the corrupt asylum head Blue. She is taken away for a lobotomy. In another reality, Baby Doll is placed in a club run by Blue where she learns that she and the other girls are to dance for paying clients. As she amazes everybody with her moves, Baby Doll enters into a fantasy realm where a wise man tells her that she must gain five objects – a map, some fire, a knife, a key and the fifth, which is hidden from her but will become apparent. Baby Doll organises the other four girls to get the items and make her escape before the High Roller arrives in three days time. Together they battle the nemeses on each level to obtain the items needed for the escape.

Director Zack Snyder has been a rising genre name over the last few years. Snyder first appeared with the remake of Dawn of the Dead (2004), a disappointing reworking of the George Romero original that did little but presage the mountain of 70s/80s horror remakes the industry would turn out over the next few years. Snyder began to show his genre smarts with the adaptation of acclaimed graphic novels such as 300 (2007) and Watchmen (2009), as well as the animated Legend of the Guardians: The Owls of Ga’Hoole (2010). These have all shown Zack Snyder as a genre director of above-average sensibilities. Indeed, Snyder now seems to inhabit the same place that Bryan Singer did at the start of the 00s before petering out on his promise in the latter half of the decade.

Sucker Punch is the first of Zack Snyder’s films to not be adapted from other source material where he has devised the story and co-written the screenplay himself. As such, Sucker Punch is a genuine head-scratcher. The film has been sold on the Snyder association and the pitch to a certain type of cool centred around its action movie/graphic novel style. The film’s trailer was a baffling entity that mixed all manner of weirdness – adventure movie and graphic novel sensibilities with images of Emily Browning combating giant samurai and on WWI battlefields – without ever giving you a fix on the film.

The sad news is that seeing the film does not improve on this anywhat. Zack Snyder says he pitched the film to executives as “Alice in Wonderland with guns” and the result is genuinely uncategorisable. If you want the capsule description, try something like imagining Girl Interrupted (1999) by the way of Inception (2010) where the theme of self-empowerment of women in an asylum from Girl Interrupted is blurred with something akin to Inception‘s concept of action scenes taking place on multiple layers of dream/daydream. (It is never particularly clear here what the various levels of dream are – you guess it is something to do with what is briefly mentioned as the therapy that Carla Gugino advocates where patients enact their dramas). Or maybe Girl Interrupted reimagined as a kickass videogame – perhaps Zack Snyder and Steve Shibuya were idly wondering what might happen if they conceptually blurred Angelina Jolie’s character from Girl Interrupted with her Lara Croft, Tomb Raider (2001). Maybe you also draw some parallels to Black Swan (2010) with its dancer being drawn into a fantasy that happens inside her own head – but where instead of imaginary rivals and murders, the heroine imagines herself into a videogame scenario.

It is a puzzle trying to work out what Zack Snyder was attempting to do with Sucker Punch. Almost everybody at the preview session came out scratching their heads – at least two people I spoke to made the separate comment that it was akin to taking LSD. Zack Snyder creates some slick action scenes – Emily Browning going into combat against giant-sized samurai; the WWI battlefield scenes with the girls fighting steam-powered German zombies and bringing down a Zeppelin; their venturing into a castle and taking on a dragon; the fight aboard the train against gleaming chromium robots.

In all of these cases, Snyder choreographs some expert action scenes, which can be forgotten precisely the second they are over. Moreover, they are action scenes that do not exist within the remotest realm of reality – Emily Browning going into combat against the samurai in high heels; the girls turn up on the WWI battlefield in uniforms that consist of lingerie and bustiers. Sucker Punch is a film where the action scenes seem less like stunt choreography than they do Zack Snyder placing the girls in cool and kickass poses.

In fact, what we often have seems more like it is a videogame than a film – you have the frequent feeling that each sequence in the action fantasy reality is akin to a game where the player must kill everything in sight and navigate their way through a maze or obstacles and find the hidden key that gives them access to the next level. Scott Glenn turns up every so often to offer crackerjack mystical aphorisms that feel like the grating motivational cliches that people might hang on the walls of office cubicles.

Sucker Punch has also been designed as a wacky collusion of competing design schemes from different eras. The vehicles, posters in the background and some of the costumes seem like 1950s US post-Wartime era; the girls’ outfits are modern Goth schoolgirl fashions, while the soundtrack is almost all contemporary artists or modern covers of classic songs. The action sequences feel like a bunch of ideas that an artistic teenager who has read too much fantasy literature might draw in their sketchbook – WWI battlefields where giant-oversized Zeppelins rub shoulders with Transformer robots, Steampunk zombies and hot chicks in lingerie with big guns; WWII bombers diving on castles and dragons; the attempt to stop a bomb aboard a futuristic train while fighting off gleaming mirrored robots with swords. Unfortunately, the reality and fantasy scenes are all designed with the same atemporal look, which erodes any distinguishing features between the different levels – it seems as though the entire film takes place in just the one reality with the only difference being the competing colour contrasts.

The other thing that irritated me about these fantasy sequences is that they never seem to mean anything. As we watch Emily Browning and the girls fight off hordes of chromium robots to stop a bomb blowing up on a train, we realise “Oh, this is mean to be symbolic of the girls trying to sneak the kitchen knife away from the cook.” Or where the fierce battle with the dragon is supposed to represent one of the girls sneaking her hand into the mayor’s pocket to steal his cigarette lighter while he is distracted by Emily Browning dancing.

I am sorry Zack but this is amateur symbolism of the worst order. It seems laughably overwrought. Compare this to something like Dennis Potter’s superb The Singing Detective (1986), which similarly had multiple levels of reality and dream but wove them into a brilliant and fascinating series of mirrors and surreal intrusions between one level and the next that delved deep down into the protagonist (and Potter)’s psychological makeup. Here you cannot say the same – all that we have are some stylish poses, girls getting kickass in schoolgirl outfits and a claim to significance on a symbolic level being levied as an excuse to throw in random action sequences.

Even more so, you have to regard as dubious a film that uses issues of child and incestual abuse and institutional corruption. I do not have a problem with these things being used as character motivation. On the other hand, Sucker Punch wants to paint itself as a parable of female empowerment. I’m sorry, but to go to a Rape, Incest or Abuse Survivors group and suggest that all one needs to do to get over your issues is to immerse yourself in videogame fantasies of being a kickass fantasy heroine slaughtering zombies and dragons, you would be treated with due ridicule. Indeed, when we see that the fantasy involves putting the heroines into a series of schoolgirl outfits or guns, uniforms and lingerie combinations, you see that this has more to do with servicing a certain teenage male fantasy than any parable of female empowerment. All of which makes Sucker Punch‘s claim to be telling a story about an abuse survivor decidedly dubious.