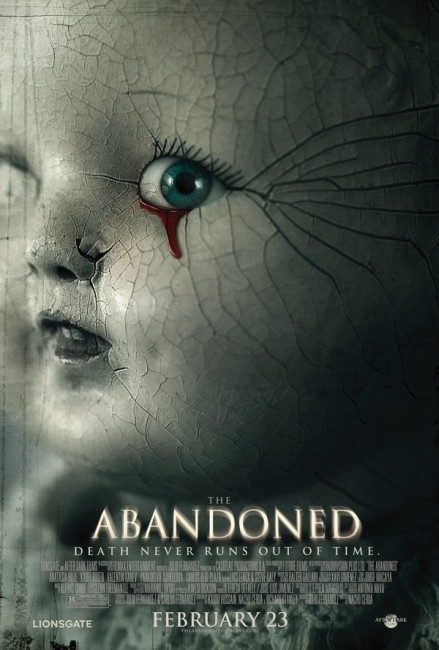 Marie Jones, a film producer in L.A. who grew up an orphan, arrives in Russia to meet with the lawyer Misharin. He provides her with information about who her Russian birth mother was and gives her the title to the family home that she has inherited following her mother’s death. Marie travels to the home in the remote countryside. Inside the dilapidated house, she is spooked by ghostly phenomena. She then meets Nikolai who reveals he is her twin brother. As the two explore the house, they encounter zombified doppelgangers of themselves. Through all of this, their father calls to them wanting to reunite the family.

The Abandoned – not to be confused with the subsequent The Abandoned (2015), which was also a ghost story with a twist ending – was a Spanish-British production shot on location in Bulgaria. It was a feature-length directorial debut for Nacho Cerda who had previously made a handful of short films and short documentaries, often on Euro horror directors like Lucio Fulci and Juan Piquer Simon, including a full-length documentary Coffin of Light (2009) about the Spanish horror film. The most interesting name present is that of Richard Stanley, the director of the cult Hardware (1990), Dust Devil (1992), originally of the troubled The Island of Dr Moreau (1996) and the subsequent Color Out of Space (2019), who is credited as co-writer.

The script creates a standard set-up for a ghost story but displaces it from the usual Gothic mansion to a farm in the remote steppes of Russia (in actuality location shooting in Bulgaria). Once we arrive there, Nacho Cerda creates some very spooky happenings, aided by an intense aural soundscape. More than just the usual hauntings and spooky atmosphere, Cerda propels us into the uncanny – especially when it comes to the scenes with Anastasia Hille and Karel Rodin encountering undead doppelgangers of themselves and then finding that whenever they try to fight one of them off and damage it, the same wounds appear on their own bodies. Or a scene where Karel Rodin is dragged down into a hole in the floor only for Anastasia Hille to rush over and find the hole has disappeared and the floorboards are unbroken. Elsewhere, she tries to escape the island but finds that the same truck in which she was driven there is now a broken down wreck that has been overgrown for years.

On the other hand, while the film is extremely well built up, it starts to collapse into narrative incomprehensibility in its second half. Here the film heads off into The Sixth Sense (1999) territory but gets too clever for itself. [PLOT SPOILERS] For some reason, Anastasia Hille finds herself in a timeloop where she is not only observing herself arriving at the lawyer’s office near the start but also is the same person she bumped into on the steps on her way in. Events start to blur between the present and the past where we realise (it is never entirely clear) that Anastasia Hille and Karel Rodin are the two children that were driven in in the truck in the opening scene, that they may have been killed as children either by drowning or being fed to the pigs.

Confusingly, they also seem to have led a Schroedinger’s Cat existence where at the same time as they were killed as children, they also managed to grow up and lead adult lives until their father now seems to be calling out to them. Even more confusingly, Valentin Ganev plays both the dead father and the lawyer who deeded Anastasia Hille the property at the start of the film. Quite what is going on during this section of the film left me mystified, as it appeared it did most audiences.