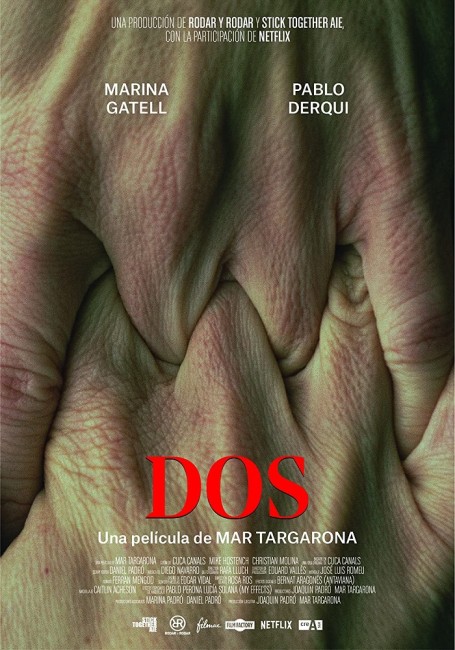 A man David and a woman Sara wake up in bed together, nude. Neither of them has any memory of how they got there. She suspects he has drugged and raped her but he protests his innocence. They then discover that their bodies have been sewn together at the waist. They have difficulty moving without tearing the wounds. In learning to navigate their way while connected, they try to find a way to escape from the room in which they have been imprisoned.

Two falls into the genre for Imprisonment Thrillers – stories in which a protagonist or protagonists are trapped somewhere and the drama of the story is about how they affect their escape. Several of these have delved into Medical Horrors – women imprisoned pregnant in The Factory (2012) and The Womb (2014), a woman with her arms and legs removed in Boxing Helena (1993), and The Skin I Live In (2011) where surgeon Antonio Banderas transforms his daughter’s rapist into a beautiful woman, plus of course The Human Centipede (First Sequence) (2009) and sequels where a mad surgeon connects a chain of people with mouth to each other’s anuses.

On the other hand, Two has a premise – a man and a woman wake up in a bed to find they have been surgically attached at the waist – that has something ick and queasy about before you even sit down to watch the film. My regular viewing companion, for instance, refused to watch the film based on a reading of the premise alone.

On the other hand, the film itself never quite taps a vein as queasily uncomfortable as it suggests it is going to be. It consists of Marina Gatell and Pablo Derqui waking up with amnesia about how they came to be there (a frequent trope in many of these Imprisonment Thrillers). She makes various accusations that he has drugged and raped her or that her jealous husband is behind this. Never dressed in anything more than a towel, they stay in a single suite right until the end as they try to make sense of the situation. That and assorted problems that their connection leaves them with – like the practicalities of how to go to the toilet.

Eventually, the script brings everything together in an ingenious twist that [PLOT SPOILERS] reveals that the two are brother-sister conjoined twins who have been surgically reunited. The last section of the film never really goes anywhere past the twist reveal. There is not too much explanation gone into the hows and whys this had been done or the person who has done this. Nor does Mar Targarona spend much time on their attempts to escape from the situation before the film wraps up in a surprisingly brief 70-minute runtime.