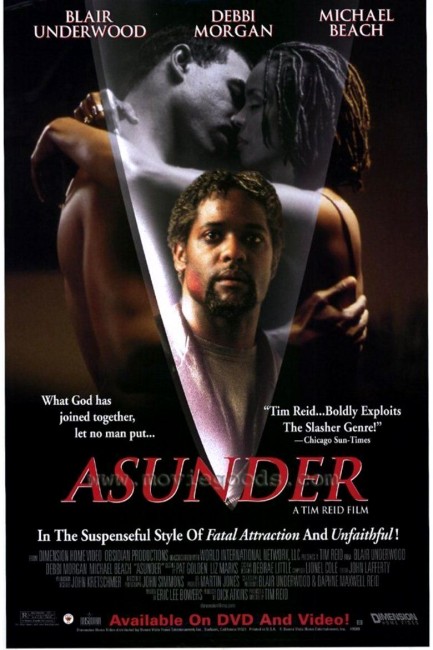 Chance Williams is shattered when his pregnant wife Roberta falls to her death from a fairground Ferris Wheel ride. Following the funeral, he goes to stay with his best friend Michael Hubbs. Unknown to Michael, Chance is having an affair with Michael’s wife Lauren. As Michael begins to suspect something, Lauren calls things off with Chance. However, Chance has become fixated on Lauren following the death of Roberta and insists that he loves her. After Michael throws him out of the house and he and Lauren tries to patch things up, Chance’s attentions towards Lauren become increasingly more forceful and menacing. Next, Lauren discovers that she is pregnant and cannot be sure which man is the father.

On the other hand, the reversal of sexes works quite well in the film’s favour. It gives the story a feminist slant, for one – and there is some tension to the idea of the woman keeping knowledge of her lover secret from her emotionally distant husband even as the stalker’s attentions start becoming obsessive, and the horrible position she is paced in after she discovers that she is pregnant and is not sure which man is the father. The script throws in a moderate number of twists – the initial revelation after the death of Blair Underwood’s wife, where we are focused on his grief, to then discover that he is having an affair with Debbi Morgan, or the revelation that the husband has been having an affair as well.

In the end though, everything pans out routinely. Actor Blair Underwood takes a producer role and clearly has some personal investment in the project. However, in the role of the stalker, his performance becomes increasingly more clichéd and one-dimensional. In fact, Underwood did the whole cold, psychopathic thing far better in Just Cause (1995), which he didn’t produce.

All the characters in the film seem to operate without any motivational depth beyond what the various plot turns require of them. It is impossible to believe that Blair Underwood (or any red-blooded hetero male) could act totally cold and indifferent when the gorgeously sexy Desiree Marie Velez is all over him, yet remain obsessed with the rather dowdy Debbi Morgan (who is otherwise a fine actress – see her excellent performance in Eve’s Bayou [1997]).

The film is filled with these hard-to-believe character short-cuts – how Blair Underwood goes from a loving, devoted family man to be revealed as someone having an affair, yet then supposedly in his grief for the other woman becomes psychopathically attached to Debbi Morgan and forgets entirely about his late wife. (Indeed, once the stalker plot takes over the deceased wife is barely even mentioned again); or how Debbi Morgan can go from having an affair and being cold to her husband to suddenly turning back around and deciding for no particular reason to be lovingly devoted to him. Nor are we are never even given any particular reason for Blair Underwood’s obsessive psychosis. It is not that any of these things could not have been given psychologically plausible explanations with a few extra lines of dialogue; but as they are, they are character actions that exist in a vacuum.