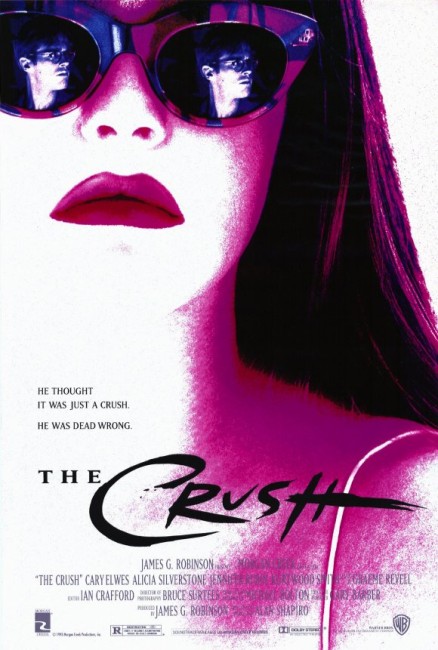 Journalist Nick Eliott moves to another city to start a new job and rents a cottage out the back of the house of wealthy businessman Cliff Forrester. There Forrester’s wayward fourteen year old daughter Darian takes an interest in Nick, coming onto him. After he rejects her advances, her attentions become increasingly vengeful, including attempting to kill his girlfriend and then him.

The Crush could be described as Lolita (1962) crossed with Fatal Attraction (1987). The Crush‘s particular spin has an inventive sensationalism in grafting of contemporary parental outrage about sex with minors onto the 1990s middle-class anxiety psycho-thriller. This middle-class anxiety thriller began with Fatal Attraction and its model was used in the likes of everything from Pacific Heights (1990) to Cape Fear (1991), Basic Instinct (1992), Unlawful Entry (1992), Single White Female (1992), The Hand That Rocks the Cradle (1992) and The Temp (1993). In these films, the cocoon of the middle-class protagonist’s world is turned on its head by a charming and seductive stranger who invariably stands to embody some alarmist conservative fear.

Despite such a promisingly provocative theme, The Crush uses the formula with thorough predictability. There are all the accustomed mysterious accidents and deaths to people that stand in the provocateur’s way; the people around not believing the provocateur is responsible; the authority figures being shown as powerless to do anything or the accusations lacking any evidence; to the central protagonist being framed.

Considering the topical hotbed that the film is dealing with – sex with minors – the film’s lack of nerve in addressing the theme is wholly disappointing. A far more adventurous film would have actually had its central character have intercourse with Darian and the plot emerge from his guilt. The films that sprung up imitating Fatal Attraction are not exactly noted for putting much in the way of blame onto their central characters actions – and in this regard, The Crush is distastefully hypocritical. The way the film is directed, it invites one to become turned on by Alicia Silverstone (who was only seventeen and underage when the film was made). There are long languorous shots down her bikini-clad sunbathing body and shots from Cary Elwes’ point-of-view as she undresses (although never enough in the way of nudity to outrage censorship).

However, having eroticised Alicia Silverstone as desirable, the film then actively invites us to join in punishing her for crossing the line and trying to tempt Cary Elwes into having sex with her. Even on a thematic level, the film wants to say that it is wrong to have sex with minors because they are not responsible enough to choose, but in every other respect it wants to savagely condemn her as adult enough to be calculating and thus entirely responsible for her actions.

The film is reasonably competently in most respects on a technical level. Alicia Silverstone, just prior to becoming a big name with Clueless (1995), is capable, no more. Cary Elwes, an actor with superstar looks, is convincingly made down to appear an awkward schmuck. (Although one wonders if Elwes and his natural good looks left as they were would not have been better suited for the part – one wonders what Silverstone sees in this dull preppy to become so obsessed with him). The best performance comes from Jennifer Rubin who, although she does not have much to work with, delivers competently.

The teenage girl stalker theme was previously done in Poison Ivy (1992) and given a much better treatment in Devil in the Flesh (1998).