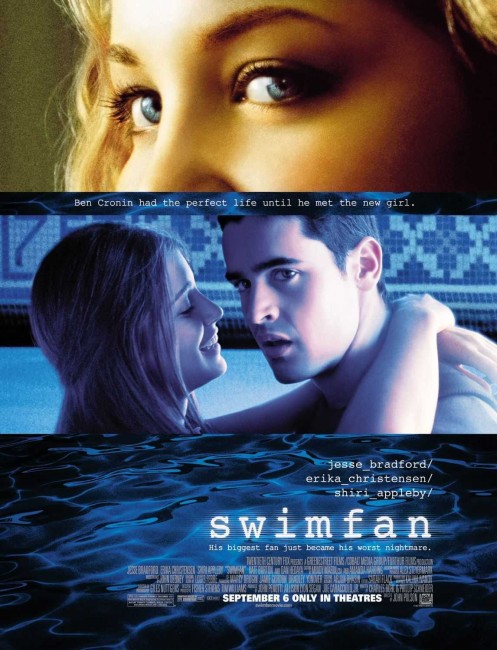 Ben Cronin is one of the stars of the school swim team and very much loves his girlfriend Amy. When he helps new girl at school Madison Bell, she takes an immediate liking to him and convinces him to have sex in the swimming pool one night. Afterwards, Madison proves obsessive and acts as though they have a relationship. When Ben tells her it is over, she begins to stalk him, causing him to lose his job, planting steroids so he is thrown off the swim team and then conducting murders and planting evidence that places the blame on him.

Swimfan is another entry in the modern genre of teen horror films that began with Scream (1996). While Scream brilliantly deconstructed the genre of the 1980s slasher film, most of its imitators abandoned the cleverness of approach and increasingly came only to rehash standard horror themes with good-looking young teen hunks and babes usually recruited from the latest tv sensation of the moment. Swimfan, which was a modest box-office success, is another of these. It is the teen version of Fatal Attraction (1987).

Swimfan draws upon genre antecedents as much as Scream does, but where Scream spoofs the genre, Swimfan writes itself entirely to cliche. Although you wonder if maybe some of the Scream-styled genre deconstructions might have helped Swimfan. Fatal Attraction was a shrilly conservative anti-feminist diatribe in the guise of a thriller. Swimfan has a distinction that one would have thought difficult – it manages to make its characters even more one-dimensional than Fatal Attraction did.

Erika Christensen’s Madison is a character that comes with zero motivation. We have not the slightest idea what attracts her to high-school athletes, what makes her develop stalker behaviour within the space of a single meeting with Jesse Bradford, even for that matter what so attracts her to him. Indeed, the film casts her so generically and with so little motivation that she is acting possessive and weird even before the requisite sexual tumble takes place.

Unlike Fatal Attraction, the tryst here is a tame single, not even unclothed, incident that takes place in the swimming pool, which the film has clearly sought to play down in order to retain a PG-rating and be viewable by its niche teen market. The downside of this is that you wonder what there was to it that it caused Erika Christensen to become so psychotic and unbalanced.

In its writing, its characters, there is nothing in Swimfan that is remotely believable and not a thing that does not feel like it has been put together out of some mechanical constructor set of generic cliches. Erika Christensen conducts utterly improbable feats – managing to impersonate a doctor, break out of a cop car after being arrested, to somehow switch Jesse Bradford’s urine sample with a steroid-dosed one (by no means an easy feat – you would have to pump someone with steroids for at least a week or more to get a decent sample), without the film even vaguely blinking at the credulity of any of it.

Even less believable is the way Jesse Bradford reacts to it. The film casts him as a teen version of Michael Douglas’s character in Fatal Attraction – alas his moral quandary is conducted in absurdly black-and-white lines. There is no straight guy who has ever gone to high school who is going to sleep with a girl like Erika Christensen and not boast about having two girls, let alone get angst ridden, regret doing it and then return to a sexless drip like Shiri Appleby.

On the other hand, you cannot deny that Swimfan is a very well made film in many other regards. It is exquisitely photographed, all in a beautifully luminous and washed-out lighting scheme. Director John Polson does an impeccable job of managing the show and there is at least one scene that makes the theatre jump where the camera cruises along underneath Jesse Bradford in the swimming pool as he bumps into a dead body.

The cast, which is surprisingly free of well-known faces, all do a fine job. The film’s real find is Erika Christensen, a seeming blend of Reese Witherspoon and Glenn Close. With her trace of baby fat and round, blankly lidded eyes, Erika Christensen has a presence of considerable depth that one wishes the material she had been given were capable of reflecting. It is such a frustrating film. There is clear A-budget class and talent that had been brought together in the making of it – it is a shame that all it has been arrayed to do is make a silk purse out of a such a sow’s ear in the script department.

(Nominee for Best Actress (Erika Christensen) and Best Cinematography at this site’s Best of 2002 Awards).