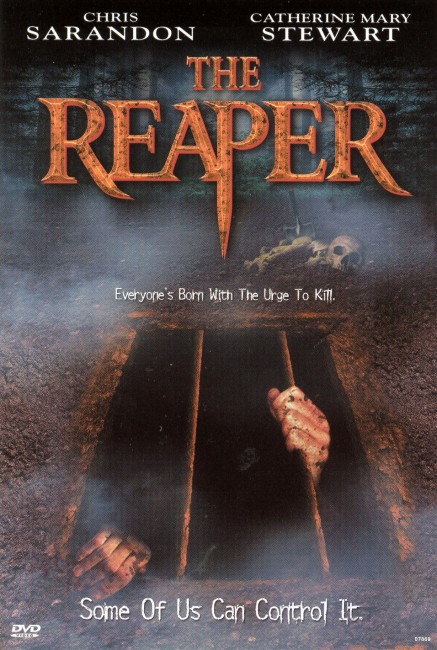 Luke Sinclair is a best-selling novelist with a series of ultra-violent books about serial killers. However, he is suffering from a severe case of writer’s block when it comes to completing his latest book. He leaves his wife and home in Boston and drives to the small town of Keeler’s Point, Maine, where he takes a room in a motel in the hope that this will allow him to break through. The next morning a girl is found murdered in the woods. The sheriff’s department brings in Sonya Lehrman, a sex crimes specialist, and Luke becomes an immediate suspect when a page from his novel ‘Reaper’ is found near the victim’s body and the murder proves to be identical to one that he has written about. As further bodies begin to appear, all exactly in ways that he wrote about, evidence comes to increasingly suggest that Luke is a serial killer.

This Canadian-made psycho-thriller certainly has an evocative title – although it proves to be one that suggests something much more grisly and grandly scaled than the film manages to live up to. What eventually does transpire is nothing more than a variant on the plot of the writer becoming embroiled in a murder mystery that mimics his books – see other films like Tenebrae (1982), A Murder of Crows (1998), I’m Not Harry Jenson. (2009), The Raven (2012) and Random Acts of Violence (2019). Indeed, the title Reaper is of little relevance to the film itself – it is merely the name of one of the novels written by the hero.

The film itself is entirely routine. It is blandly directed and the plot rarely moves beyond the unfolding of clichés. To their credit, the writers at least appear to have gone and studied their forensics. However, neither the writers nor director John Bradshaw ever get in and generate any suspense. The film should have held us to it with the fascination of trying to work out whodunnit and in weaving ambiguity and doubts around the question of whether Chris Sarandon is the killer or not. The film swings this only in the last few minutes with Catherine Mary Stewart unsure whether either Sarandon or sheriff Vlasta Vrana are the killer, but by this point it comes far too late in the game.

The film headlines Chris Sarandon. Sarandon plays with his customary sour-faced aloofness as though he is looking down on everybody around him with a barely disguised amusement but he is also too impassive and simply not a good enough actor to suggest the troubled nature of the central character. That leaves the real acting in the film to Catherine Mary Stewart and Vlasta Vrana. Catherine Mary Stewart, who had a minor presence as a teen actress in the mid-1980s in films like The Last Starfighter (1984), Night of the Comet (1984) and Weekend at Bernie’s (1989), has grown up into a surprisingly intelligent performer and holds the screen far more than the apathetic Sarandon. Canadian actor Vlasta Vrana, usually cast as middle-aged detectives, gives a decent performance as the sheriff, one that he has clearly modelled on Wilford Brimley.

John Bradshaw has been a regular director of B-budget Canadian thrillers and action films for video and cable. His other genre outings include Specimen (1996), Breakout (1998), Killing Moon (1999), They Come Back (2007) and Pegasus vs. Chimera (2012), as well as a host of Christmas fantasies.