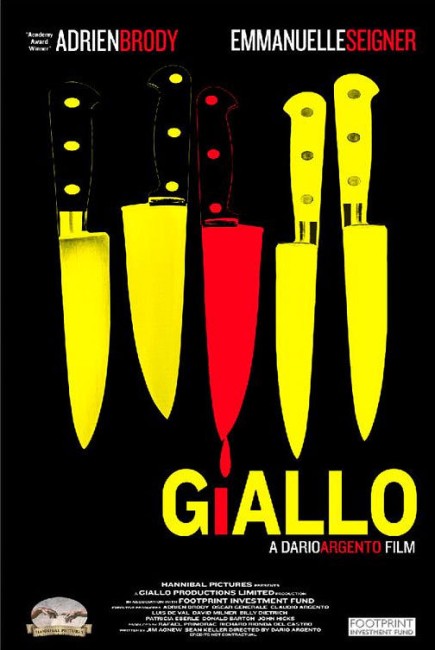 The air hostess Linda returns to Turin just as she receives a cellphone call from her sister Celine, a fashion model. Celine gets into a taxi, only for the driver to drug and abduct her. Linda goes to the detective Enzo Avolfi, begging his help finding Celine. She presses Enzo and he tells her he suspects that Celine has been abducted by a serial killer who specialises in mutilating and then killing beautiful girls. One of the killer’s victims is found still alive, cryptically saying the word ‘yellow’ before she dies. Linda and Enzo realise that she means that the killer suffers from a form of liver dysfunction that leaves him with yellow skin.

Italy’s Dario Argento probably needs no introduction as a cult director. Argento emerged in the 1970s with a series of giallo thrillers. Giallo is a specific type of Italian thriller where the focus is on wildly theatrical and artily stylish murders and a frequently sado-sexual undertow, while the thriller plotting or psychological motivation is often deliberately and preposterously contrived. Giallo is the Italian word for yellow and became so named after Il Giallo Mondadori, a series of books from the Italian publishing house Mondadori Publishing, under which the company issued mostly translated copies of English-language thriller writers with distinctively lurid yellow covers. The Giallo Mondadori line began in 1929 and is still being published today. Since then, Giallo has evolved into a name specifically applied to the extravagantly theatrical sado-sexual films that started in the 1960s with Mario Bava and was then taken up by Argento and others.

Giallo initially sets in with more promise than a number of recent Argento films. There are the opening scenes following Valentina Izumi as she and a friend go to the opera and then a disco, before she is picked up and attacked by a sinister cab driver. Although the killing is routine – and moreover one where Argento seems to have borrowed the killer’s m.o. from The Bone Collector (1999) – the lushness of the surroundings are beautifully photographed, making pointed contrast between the opulent elegance of the opera and the pulsing techno-beat of a disco. Cinematographer Frederic Fasano is one of best collaborators that Argento has had in some time and lights the Turin locations up with a gorgeous classical beauty. There is also a wonderfully rich score accompanying everything.

There are various other scenes with the killer threatening (although not actually being seen) to cut off Valentina Izumi’s lips with a pair of pliers, and elsewhere snipping off Elsa Pataky’s finger and injecting her in the tongue with a syringe in closeup, or of young Nicolo Morselli stabbing the butcher to death. However, these seem pallid copies of the extravagantly arty sadism that Argento made his name with in the 1970s and 80s.

This is the first time in several years that Dario Argento has worked from a screenplay in which he has not had a hand. The script comes from two American writers – Sean Keller, the author of several Sci-Fi Channel CGI monster movies, and Jim Agnew. This provides a screenplay that is more coherent than usual for an Argento film, not to mention features psychological motivation that exists within the bounds of credibility.

On the other hand, with Argento’s stylish despatch set-pieces toned down, all that we have is an ordinary psycho-thriller of no particular distinction. The clues that the two lead characters deduce leading to the killer seem to come out of nowhere with the screenplay never fully letting us into the process that arrives at these. We have also had yellow-skinned serial killers before in recent years with both Sin City (2005) and Black Christmas (2006), which in both cases conducted a far better treatment of the idea and have robbed Argento of the novelty of such a notion.

The film also arrives at a surprisingly abrupt ending where a parking building security guard comes across Elsa Pataky inside a car trunk banging to be let out and the camera ominously closes in on a pool of blood gathered under the car before abruptly cutting to the end credits. For a film that takes the title of an entire genre such as this, one expected that Argento would have done something classic with Giallo, something that would have redefined the boundaries and tropes of the genre; unfortunately he has only made the same old film he always does.

Adrien Brody makes for odd casting as an Argento hero. Brody tries hard but he is not particularly well suited to the grizzled detective hero role – Brody did a far better job of playing the world-weary gumshoe in Hollywoodland (2006). To his credit, Brody at least establishes a reasonable rapport during the scenes with Emmanuelle Seigner. Brody appears to have had a particular enthusiasm for Giallo – one is not sure why – and even signed on as a producer as well as brought his girlfriend Elsa Pataky along to play the abducted sister. (Said enthusiasm appeared to evaporate by the time of Giallo‘s 2010 US theatrical release when Brody sued to prevent the film’s release on the grounds of $640,000 unpaid wages, forcing distributors to release directly to dvd and not use his likeness in any promotion).

It is also not particularly hard to work out that the killer Yellow is also Adrien Brody hiding under makeup. (Yellow is listed on the end credits as being played by Byron Deidra, which is an anagram of Adrien Brody). When you realise it is Brody, the patent theatricality of the performance starts to border on the decidedly silly. Emmanuelle Seigner, aka Mrs Roman Polanski, has never been the world’s greatest actress and here, as a typically underwritten Argento heroine, comes across as blank.