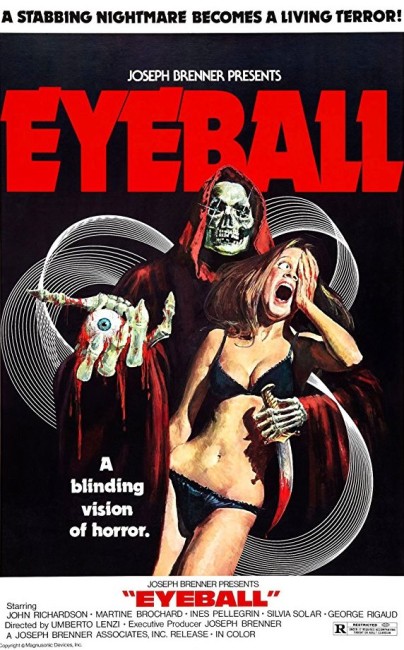 The giallo film had started in the early 1960s. Gialli were an Italian-made series of psycho-thrillers designed in the same vein as Alfred Hitchcock’s Psycho (1960). Mario Bava’s Blood and Black Lace (1964) was not the first but set the style for those that would follow – an emphasis on vividly colourful photography and extravagant surroundings; showoffy cinematographic effects; beautiful women in a frequent state of undress before being killed; a nominal thriller plot where all of this is revealed to be the activities of a mad killer, usually one of the cast, but with far less of an emphasis on psychological explanations than English-language psycho-thrillers. Most of the films would be given fanciful titles – for instance, while this had the crude English-language title of Eyeball that was slapped on it, it is known as Red Cats in the Glass Labyrinth in the original Italian. (For a more detailed listing of these see Giallo Films).

Eyeball comes from Umberto Lenzi whose main claim to fame is having started off the notorious genre of the Italian cannibal film with Deep River Savages (1972). (See below for Umberto Lenzi’s other films). The film was shot in Spain and features a mix of Italian and Spanish actors as well as the minor English-language name of John Richardson. You get the impression that Eyeball was conceived not long after the hit of Nicolas Roeg’s Don’t Look Now (1973) from which it borrows in particular the image of the knife-wielding killer in a scarlet red raincoat running around a beautiful European city.

Eyeball is not a very good example of the giallo film. It probably need not be said that Umberto Lenzi is a far more workmanlike director and fails to bring the style that Mario Bava and Dario Argento brought to the genre. Not to mention that the film suffers from the typical dubbing of the era that gives the impression that it is being uttered by robots.

There is a lack of anything notable about any of the death set-pieces here – other than some mildly gory effects with eyeballs being gouged out. Lenzi lacks much of a pace and so fails to get the thriller element wound up in any particular way. There is a minor whodunnit aspect as the script keeps us guessing who among the party of tourists is the killer – and you do have to admit that the eventual revelation turns out to be a moderately effective surprise.