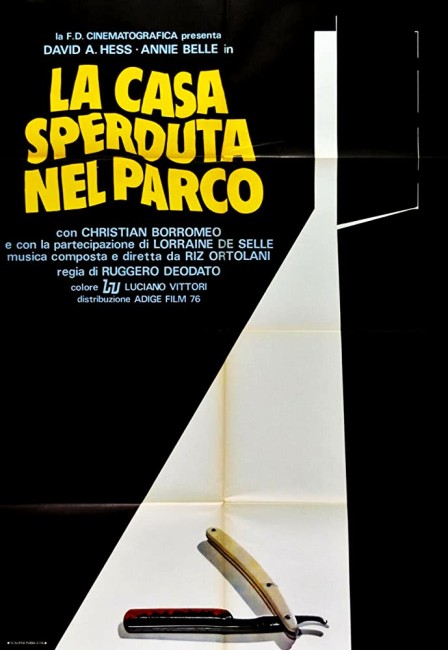 Alex and his friend Ricky are just preparing to go out on the town when Tom and his girlfriend Lisa pull up at Alex’s New York City garage with engine trouble. After affecting repairs, Alex persuades Tom and Lisa to invite him and Ricky along to the party. They are welcomed by the two other couples there. In the midst of this, Lisa both responds to and then rebuffs Alex’s sexual advances. Things explode into violence over a game of poker. Alex then takes all of them prisoner at knifepoint where he and Ricky begin battering the men and sexually assaulting the women.

Ruggero Deodato will always be known as the director who made the notorious Cannibal Holocaust (1979), the film that was banned almost everywhere in the world. Beyond that, Deodato had a five-decade career in Italian exploitation cinema and has made a number of other films (see below for which). House on the Edge of the Park was made directly on the back of Cannibal Holocaust. Although not as notorious, the film was subject to considerable censorship controversy when it came out – in England it was cut of 11 minutes and 43 seconds and subsequently listed as a Video Nasty.

House on the Edge of the Park is a clear attempt to copy the success of Wes Craven’s The Last House on the Left (1972). David A. Hess, who played a memorable psychopath in Last House, has been employed in a near-identical plot in which he leads a home invasion and brutalises middle-class people. There is also a similar but lesser ending here where the victims turn the tables.

As the film starts in, Ruggero Deodato seems to be setting up some interesting tensions. David A. Hess and his slightly thick sidekick Giovanni Lombardo Radice are invited to a party being thrown by three wealthy couples. We’ve seen The Last House on the Left and know what is going to happen next. For a time, Deodato toys with us, lets class tensions plays out – the women of the group cheering on Radice as he dances and strips for them, seemingly laughing at his expense, and especially the teasing by Annie Belle who came to the party with another guy but seems unfazed when David A. Hess starts putting his hand on her thigh and making out with her in the kitchen before she leads him upstairs, stripping down and inviting him to join her in the shower and then abruptly rebuffing him. David Hess is certainly suited to the part and plays the role as all macho swagger and coarse thuggishness. The other side of the show is filled out with the gorgeous allure of Annie Belle and the exotically unusual Marie Claude Joseph, a dark-sinned woman with a bald head.

Contrary to many of the films of the Backwoods Brutality cycle, what we have here reminds more of Straw Dogs (1971) where the loutish working class locals were being unwittingly teased and taunted by Susan George’s sexual sophistication. The same thing is at play here but it is almost as though Ruggero Deodato is placing us inside the shoes of the two working class joes and getting us/them riled up because of the bored rich people and their mocking teases of sexual come-on and rebuff.

The other film that you could compare House on the Edge of the Park to is Death Weekend/The House By the Lake (1976) in which a group of locals invaded the home of Chuck Shamata and his weekend date Brenda Vaccaro and the entire film became about watching his middle-class world being torn apart. A similar thing plays out here but with one difference – there is no sympathetic point-of-view character on the side of the victims as was played by Vaccaro in that film.

On the other hand, this leads to a film that seems far tamer than the censorship outrages suggest it is going to be. If you contrast the nasty rape that take place in The Last House on the Left and in particular Day of the Woman/I Spit on Your Grave (1978), the two rapes that take place here – between David A. Hess and Annie Bell, and between Giovanni Lombardo Radice and Lorraine Del Salle in the greenhouse – seem tame. For example, if you were to watch each scene without the context of the rest of the film, you would not be wrong in mistaking either for a standard love scene. What is crucially lacking is any sense of terror or violation on the part of either woman. There is more so in a couple of other scenes where Hess forces Brigitte Petronio to strip and particularly the opening scene where Hess pulls over the car of Karoline Mardeck (Hess’s real-life wife) and violates her in the backseat. However, in terms of the sheer assault on their characters that other films of the 1970s pulled off, the two main scenes here send off all the wrong messages.

Outside of this, when it comes to the scenes of the party being beaten up and tortured, Deodato seems to lack any interest. There are one or two scenes with people fighting, being punched about, pushed in the pool – all before [PLOT SPOILERS] the highly contrived turning of the tables and revelation that everything has been a set-up in order to conduct a Last House on the Left styled reversal on us.

Ruggero Deodato’s other films of genre interest are:- the masked superhero film Phenomenal and the Treasure of Tutankhamen (1968); the cannibal films Last Cannibal World/Jungle Holocaust (1977) and the notorious Cannibal Holocaust (1979); the sf adventure Atlantis Interceptors (1983); another savage jungle adventure Cut and Run (1985); the slasher film Body Count (1986); the sword-and-sorcery film The Barbarians (1987); Dial Help (1988) about ghostly phone calls; Phantom of Death (1988) about a man who needs to kill to rejuvenate; an episode of the anthology The Profane Exhibit (2013); and Ballad of Blood (2018).