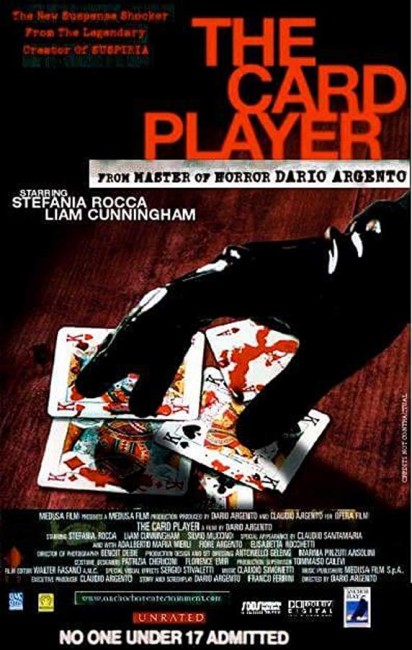 Police in Rome are taunted by a serial killer nicknamed The Card Player who abducts victims and then demands that others engage in a game of poker via the internet for the outcome of their lives. When a request to play the killer’s game comes through to the police, detective Anna Mari is told not to play by her chief and, as a result, the victim is killed. Anna befriends John Brennan, a visiting inspector from England, after they both agree that the chief’s decision was a mistake. The two later become lovers. Together they recruit Remo, a teenage video poker whiz, to help play against the killer and he is successful is winning back the life of the chief’s daughter after she becomes the next person abducted. However, this serves to make Anna a target for the killer.

The Card Player was the seventeenth film from cult Italian director Dario Argento. Argento first emerged in the 1970s with giallo psycho-thrillers such as The Bird with the Crystal Plumage (1970), The Cat O’Nine Tails (1971), Four Flies on Grey Velvet (1971) and Deep Red (1976), which specialise in ultra-sadistic despatches wound around improbably contorted psycho-thriller plots. Argento peaked with films like Suspiria (1977), Inferno (1980), Tenebrae (1982), Phenomena/Creepers (1985) and Opera/Terror at the Opera (1987). It has been generally agreed by Italian horror fans that Argento’s output from the 1990s onwards – the likes of Two Evil Eyes (1990), Trauma (1993), The Stendhal Syndrome (1996), The Phantom of the Opera (1998), Sleepless (2001), The Card Player, Mother of Tears: The Third Mother (2007), Giallo (2009), Dracula (2012) and Black Glasses (2022) – have been weaker and hold considerably less effectiveness than his earlier films. Certainly, Argento has not had any film since Opera that has been a cult hit as his earlier works were.

The Card Player is disappointingly lesser Dario Argento. Indeed, it is a film where Argento, while still making one of his familiar giallo psycho-thrillers, has eschewed almost all of the gory, sadistic set-pieces that are his trademark. Certainly, Argento does direct one of two passable suspense sequences, particularly during the card games – he creating an especial degree of tension during the battle for the life of the commissioner’s daughter.

There is one standout sequence that starts in an exquisitely dressed card-themed bar where Silvio Muccino is taunted by a beautiful girl who leads him on a chase through the narrow streets and down past a reservoir to reveal that this is a trap, only for the killer to shoot the girl as a demonstration and then tell Muccino that he must choose which of two doors to enter or die too, which he does only for the killer to throw a noose around his neck and then accelerate away dragging him behind a speedboat. There is a highly suspenseful climactic scene with Stefania Rocca and the killer handcuffed to a railway track, forced to compete against one another in a game on a laptop for the possession of the key to free themselves before a train comes.

If there is not exactly any gore in The Card Player, there is a certain clinical fascination upon Dario Argento’s part where he shows scenes of detectives and coroners prying open eyes, noses, mouths and slit throats of corpses. (On the less convincing side, the body dragged out of the water looks far more decayed than it should be for the time it is supposed to have been there).

With The Card Player, Argento has also notedly ditched the old-fashioned Freudian psychological traumas and improbably contrived psychological motivations that the psycho-thriller and giallo film is founded on and has come up to date with modern forensic profiling. There is at least one imaginative part where the script tries to apply poker as a metaphor for life, seeing the eyes not as the window of the soul but rather the way that one plays the game. However, The Card Player is also the most traditionally plotted of all of Dario Argento’s films to date. Unfortunately, the lack of sadistic set-pieces makes it merely another psycho-thriller – and stripped of the Argento essence, there is nothing particularly outstanding about it.

On the plus side, The Card Player has one of the best casts that Dario Argento has worked with for some time. Stefania Rocca (an actress that one predicts is soon on the way to an international profile) is good in a role that Argento had originally intended for his daughter Asia. On the minus side, Stefania Rocca and the Italians in the cast are considerably hampered by Argento having chosen to shoot the film in English (a language he speaks only sparingly) where their delivery of lines comes out through flat inflections.

Liam Cunningham is one of the best lead actors that Argento has ever had in one of his films, although his character is arbitrarily bumped off in the middle of the film. The pairing of Liam Cunningham and Stefania Rocca however makes The Card Player the only of Dario Argento’s films to feature a warm relationship at its centre.