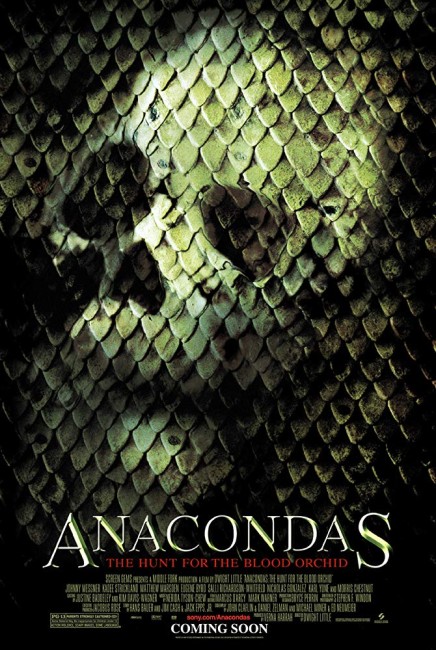 A team of botanists obtain sponsorship from a pharmaceutical company to mount an expedition to Borneo to find the rare Blood Orchid that blooms in a remote valley only once every seven years and may be the panacea that will halt human aging. However, the expedition arrive in the middle of the monsoon season and find that the only boat owner willing to take them upstream is the individualistic American skipper Bill Johnson. They travel through a number of perils aboard Johnson’s rickety boat Bloody Mary, before they crash over a waterfall and the boat is wrecked. They proceed on foot but find that they are being hunted by a giant anaconda. As the anaconda picks several of the party off, they realise that it has been grown to giant size by ingesting the Blood Orchid. Moreover, it is mating season and a host of other giant anacondas have gathered in the area. At the same time, their attempts to survive are sabotaged by the traitorous Jack Byron who is determined to obtain samples of the Blood Orchid at all costs.

Anaconda (1997) was one of the first of the modern brand of CGI monster movies to come out following the success of Jurassic Park (1993). Anaconda was ridiculed by both audiences and critics, nevertheless was a modest – although hardly runaway – success. It subsequently gained a reputation for its absurd entertainment value – the ridiculousness of its plot and the sight of a madly overacting Jon Voight. All of this makes the surprising prevalence of the idea of an Anaconda 2 puzzling. The idea floated around on various production schedules since 2000, while at least one other film, the entirely unrelated King Cobra (1999), stole the sequel’s thunder by billing itself as Anaconda 2 in some places. One suspects the interest in the exercise probably had something to do with the superstardom that was subsequently found by the original film’s lead actress Jennifer Lopez. Although Lopez’s name was oft-rumoured in relation to the sequel, it never was attached in any serious way and she gives all indication of having regarded the original as one of those things that everybody does before they get famous and spend the rest of their careers trying to forget – not that Lopez appears to have any made any better choices of the quality of the films she appeared in subsequently.

Anacondas: The Hunt for the Blood Orchid is a sequel to Anaconda only in a very loose sense – it should probably be better regarded as a more elaborate remake. The sole point of connection, beyond both featuring giant snakes, is where the original is very briefly recapped as a story that one of the characters says he heard about. And certainly, Anacondas does credit the original screenplay as the basis of this film and give the original writers story credit. Various other screenwriters, including the duo of Michael Miner and Ed Neumeier who were responsible for Paul Verhoeven’s RoboCop (1987) and Starship Troopers (1997), have been brought in to rework it.

The director of the sequel is Dwight [H.] Little. Little first appeared with a couple of genre films – Halloween 4: The Return of Michael Myers (1988), the slasher movie version of The Phantom of the Opera (1989), which was better than one might expect, and the videogame adaptation Tekken (2010). Mostly, Little’s directorial career has been an unmemorable one, marked by various action vehicles – Marked for Death (1990), Rapid Fire (1992), thrillers – Murder at 1700 (1997), complete hackwork – Free Willy 2: The Adventure Home (1995), even Christmas tv movie fare – Papa’s Angels (2000), as well as a host of episodes of tv series ranging from The X Files, Millennium and The Practice to Wolf Lake, Bones and Prison Break.

Up on screen Anacondas: The Hunt for the Blood Orchid, despite being bigger and more elaborate, only ends up being even more ridiculous than the entirely silly original film was. The script seems to have been written with the intention of hauling in every single cliché of both the monster movie and the jungle adventure film. The characters are all stock:– the scientist who proves utterly ruthless in his determination – and has a British accent to boot; the Black guy who delivers hip lines at appropriate intervals and screams like a girl when he gets scared; the woman character who is there for no other purpose than to become the butt of jokes about being a city slicker who is hopeless in a jungle environment away from her creature comforts; the grizzled, lantern-jawed Harrison Ford-styled hero who mans a ramshackle boat and is first encountered gone native and drinking in a seedy bar (at which Johnny Messner at least does a good job of appearing handsomely profiled and full of intently driven purpose at every moment). The situations encountered – from headhunters to perilous waterfalls to deadly spiders – all come from the book of adventure movie clichés, while the situations that are invented for the film – the urgent quest for a rare orchid that promises immortality, snakes grown to giant-size by eating the orchid all gathering in a pit for mating rituals – are even more preposterous.

The snakes are designed at ten times the size they were in the original and, while the CGI scenes of them gliding past people in the water and reaching up to snatch victims are undeniably impressive, this makes the snakes so improbably oversized as to be absurd. (Not to mention the fact that has been commented upon by those in the herpetological know of anacondas not being a species that is native to Borneo). There is an impressive sequence with a boat going over a waterfall in slow motion but at no point does Anacondas seem anything other than a ludicrous conjunction of bad clichés, ridiculous writing and a desire to wow you with big CGI monster effects. None of it succeeds. Indeed, all that we have is a film that should have been made on a B budget and sold directly to video, which has somehow exceeded its natural confines.

There were two further sequels Anaconda 3: The Offspring (2008) and Anaconda 4: Trail of Blood (2008), shot back-to-back for the Sci-Fi Channel, followed by the crossover Lake Placid vs Anaconda (2015).