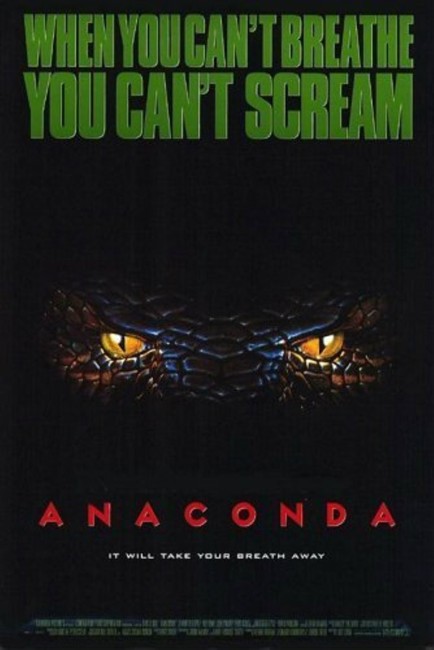 Terri Flores heads up the Brazilian Amazon with a camera crew aboard a barge with the intention of filming a documentary about the discovery of the Shiroshama tribe. They rescue a man from a sinking boat who introduces himself as Paul Sarone, a former Catholic priest now turned snake hunter. Sarone claims knowledge about the area and offers to show them a shortcut. The expedition undergoes several tragedies, including Terri’s boyfriend anthropologist Steven Cale being stung by a deadly wasp. They are then attacked by a 30-foot long anaconda. Sarone persuades them they could make a much more interesting documentary about capturing the anaconda. However, the anaconda proves far more deadly than they anticipate.

Anaconda was one of the first of this new breed of CGI monster movies to come out. Anaconda is fairly much an attempt to make a CGI version of Jaws – with snakes instead of sharks. (Although, with its enclosed boatboard Amazonian setting, the film comes closer to The Creature from the Black Lagoon (1954) than it does to Jaws). The CGI and animatronic snake effects are good, with some impressive shots of the anaconda swimming past the camera with the shape of a half-devoured body pressing out of its gullet; views from down inside its throat; and a breathtaking shot where it unfolds in mid-air down the length of a waterfall to catch a falling victim. Although in the end, Anaconda has the problem of most CGI films in that it cannot help but remind you that they are just CGI shots. The film’s most novel variation on Jaws is the turning of Robert Shaw’s Great White Hunter, played here by Jon Voight, into a character that stands ambiguously between a savant who has knowledge about the situation and outright psychopath.

Peruvian director Luis Llosa, who also made the B-budget sf film Crime Zone (1989) and the underrated Sylvester Stallone action vehicle The Specialist (1994), does a competent job with the suspense. However, the film itself collapses into the frequently laughable. It has the feel of a script that should have been made as a cheap B movie but that ended up taking itself too seriously and somehow obtaining a $50 million budget.

The plot devices it throws up are ridiculous – characters stung by wasps that have been placed in scuba masks; barriers (for no reason ever explained) placed across the river and then being dynamited and raining the barge with snakes. Anaconda even manages to invent jungle variations on the old “Excuse me while I go off into this darkened room alone” cliché with characters sneaking off into the jungle at night for some nooky. In a none-too-serious B movie, these implausible and cliché plot devices could have been reasonably entertaining – laid out for all to see on an A-budget they are frequently laughable.

Characters verge on the cartoonish – Jonathan Hyde is cast as a self-important English snob who makes witheringly sarcastic comments while drinking champagne and driving golf balls off the barge as they cruise along the Amazon; another character spouts surfer speak. And then of course there is Jon Voight’s Great White Hunter whose motivations seems to belong more in the realm of fantasy adventure films like Raiders of the Lost Ark (1981). It is not exactly helped by Voight who plays with an incredibly fake accent and succeeds in overacting to heights that one has not seen on screen in some time.

Certainly, the rest of the cast play well. Jennifer Lopez, well before being reinvented as a Latin America singing sensation, becoming an A-list celebrity dubbed J-Lo and various tabloid melodramas, is reasonably competent; Jonathan Hyde has his sarcastic amusements; Eric Stoltz is, as always, good (although for no clear reason is inexplicably sidelined for most of the film); and Ice Cube wooden.

An Anaconda 2, minus Jennifer Lopez, was promised off and on throughout the 2000s. This finally emerged as the even more ridiculous Anacondas: The Hunt for the Blood Orchid (2004). Two further sequels, Anaconda 3: The Offspring (2008) and Anaconda 4: Trail of Blood (2008), were shot back-to-back for the Sci-Fi Channel, followed by the crossover Lake Placid vs Anaconda (2015). The aforementioned King Cobra (1999) was alternately titled Anaconda 2 in some areas, although is otherwise unrelated to this film – indeed, seems not to know the difference between one snake being a constrictor and the other poisonous. Anaconda was also spoofed in Wrongfully Acused (1998).