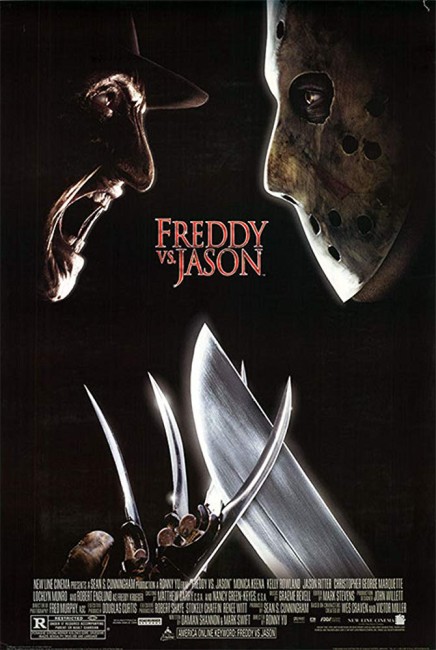 Freddy Krueger has lost much of his power because people no longer remember and thus no longer fear him. Freddy appears in the dreams of Jason Voorhees and sends him to Springwood to conduct more murders and scare people into believing in him again. Lori Campbell is witness to one killing and hears the authorities fearfully whispering the name Freddy Krueger. Her former boyfriend Will Rollins makes an escape from the Westin Hills asylum where he has been confined. In doing so, Will makes the realisation that he and the others that were witness to Freddy’s killings have been deliberately locked away so that Freddy might be forgotten about. Freddy begins to appear in the dreams of Lori and her friends, killing them as he gains strength. They also realise that Jason has gotten out of Freddy’s control and is now conducting his own killing spree. They try to find a way to combat the two menaces.

Wes Craven’s A Nightmare on Elm Street (1984) was not exactly a slasher copy – for one, it has an original premise and a much higher degree of imagination in this generally creatively impoverished genre – but it did fundamentally feature a boogey man butchering teenagers and sat atop the same body of work. It too proved an enormous success. New Line Cinema spun A Nightmare on Elm Street out into a series of sequels, which soon came to be founded on a campily overacting, one-liner spouting Robert Englund and the makeup effects people’s novelty despatches. (See below for listings of the films in either series).

Both series creatively burned out around the end of the 1980s. They had trapped themselves in a limited formula and by then the predominantly teenage fanbase of both series had started to grow up. However, an interesting thing then happened. Paramount, who had produced seven Friday the 13th sequels, sold their interest in the series back to original director Sean S. Cunningham. Cunningham then sold the rights to New Line Cinema, the producers of the A Nightmare on Elm Street series.

With the two prime bad guys of the decade now under the same roof, the idea of a Freddy vs. Jason team-up began to gain considerable word of mouth on the fan rumour mill. This was further intensified by the first Friday the 13th film produced by New Line Cinema, Jason Goes to Hell: The Final Friday (1993), which contained a final throwaway shot where Jason is dispatched and Freddy’s steel-clawed glove pops into frame to pick up his hockey mask. Rumours about the Freddy vs. Jason project went into overdrive and all manner of spec and rejected scripts could be found on the internet or purchased at convention huckster’s tables.

These included offerings from Star Trek producers Brannon Braga and Ronald W. Moore that had Freddy and Jason battling the Devil in Hell; an intriguing script from Peter Briggs, who also wrote a further monster team-up with one of the various versions of the long rumoured AVP: Alien vs. Predator (2004), which was set on the eve of the millennium, featured the end of the world and explored how both Freddy and Jason had a shared past; and another script that would bring back characters and feature cameos from both series. The project flipped and flopped on and off for the better part of a decade, caught up between copyright legalities between both franchises and waning studio interest after indifferent box-office and fan reception to the entries in either series that straggled out through the 1990s.

Freddy vs. Jason finally emerged here. After a number of rumoured names to helm the Freddy vs. Jason project, including Sean S. Cunningham and makeup effects man Rob Bottin, best known for his work on The Thing (1982), directorship was finally handed over to émigré Hong Kong director Ronny Yu. Ronny Yu made a modest name for himself with HK horror films such as The Saviour (1980), The Trail (1981), The Phantom Lover (1995) and especially the Wu Xia The Bride with White Hair (1993) and subsequently the excellent Fearless (2006) and the historical epic Saving General Yang (2013). Yu was one of the handful of directors to emigrate to the West US just before the Hong Kong handover where he has remained steadily employed with unremarkable efforts like the children’s film Warriors of Virtue (1997), the crimeland thriller The 51st State (2001), as well as Bride of Chucky (1998), which revived another 80s horror franchise, the Child’s Play series.

Freddy vs. Jason proved to be a modest success, even though it had been the better part of fifteen years before either Freddy or Jason were poster children that commanded the front cover of Fangoria magazine. What is perhaps most noticeable is that since their heyday the essence of both films have substantially changed. The classic Friday the 13th-styled slasher movie has been supplanted by the deconstructed slasher film of Wes Craven’s Scream (1996) and sequels, wherein the standard victims of yore had been replaced by cynical teenagers who are sharply aware of the genre they are in, having clearly watched the same films that the audience had and were able to recognise and wryly comment on the clichés as they took place around them. New Line Cinema’s two other Friday the 13th films, Jason Goes to Hell and Jason X (2001), both showed evidence of moving in similar directions themselves and starting to mock the conventions of the genre. Equally so, the A Nightmare on Elm Street films, which were very much a product of the mid-1980s fad for air-bladder and animatronic makeup effects, were all produced before the mid-1990s revolution in CGI effects, which had by come to almost entirely supplant traditional physical effects.

What is particularly noticeable after glancing through some of the various discarded Freddy vs. Jason scripts, many of which are available online, is that almost any other proposed version of the story – Freddy and Jason in Hell vs the Devil, Freddy and Jason at the millennial apocalypse, an intertwined Freddy and Jason origin story – would have been more conceptually challenging than the one we end up with on screen. The plot we do have – Freddy enters Jason’s dreams to make him go scare up people on Elm St so he can be feared again and come back to life, Jason goes out of control – feels like it has a minimalist schematicism designed only to get past the most basic set-up and into the film – there is, for example, zero exploration of the motivation behind the townspeople of Springwood’s decision to lock witnesses to the Freddy killings away and how they knew this would kill him off.

The film kicks off promisingly. There is an amusing opening scene where a girl takes a skinny-dip and predictably becomes a victim of Jason, before morphing into a figure who, with wry post-Scream self-awareness, starts mocking the formula: “I should have been watching that one – not drinking, not meeting a boy at the lake.” This is followed by a scene where Jason invades a party, which is promisingly filled with some cynically sketched teen characterisations and where Ronny Yu knowingly skewers the suspense clichés of the genre, and a decent hack set-piece where a victim is multiply stabbed through a bed with a machete before being left sandwiched in between the bed’s fold-up halves.

Alas, a promising beginning dissipates into an otherwise mediocre film. In trying to make both a Friday the 13th and a A Nightmare on Elm Street film, Ronny Yu is stuck with a stylistic juggling act. The Friday the 13th films were always staged as novelty death sequences – people being hacked up in the shower, while skinny-dipping, wandering through the woods, in bed etc; the set-pieces in the A Nightmare on Elm Street films seemed to fall somewhere between downmarket Salvador Dali and the punchline in a Road Runner cartoon.

As a result, Freddy vs. Jason is constantly vying between the relatively realistic gore effects of the Friday the 13th series and the anything-goes surrealism of the Elm Street sequels. However, Ronny Yu fails to conduct either of these particularly well. There is a few Friday the 13th-styled hack-and-slash set-pieces but none that are particularly standout (although it should be noted that Freddy vs. Jason is a good deal more unstintingly gorier than the previous few Friday the 13th films have been).

Even more disappointing is Freddy vs. Jason‘s attempts to be an A Nightmare on Elm Street film. The selling point of the original sequels were their novelty effects – Freddy turning into a giant snake, a biomechanoid motorcycle, a tv set, dancing people along on their veins like marionettes, even at their silliest effects like Freddy plucking victims off a giant pizza on the end of his claws. Here there is an okay effect with a Freddy caterpillar that turns up to offer one victim a hookah pipe like something out of Alice in Wonderland (1865), but that is about it.

Some of the sequences are woeful in their lack of essence – like where Katharine Isabelle is caught in Freddy’s basement and her big novelty effects dispatch turns out to be … falling off a metal rail. Or the sheer silliness of the scene where Freddy enters Jason’s dream and bounces him around like a pinball (accompanied by ringing sound effects), a sequence that vies with the pogo-stick and hearing aid sequences in Freddy’s Dead: The Final Nightmare (1991) as the most laughable in the entire series.

Certainly, Ronny Yu gets it together for a drag-down, punch-out climax between Freddy and Jason but this is a sequence that also leaves you laughing at the ridiculousness of it – with Freddy reduced to little more than a perpetually put-upon cartoon slapstick villain who only seems to lack a mustache and the ability to shake his fist and go “bah,” as he is battered about, has his claws progressively hacked off and is then impaled with them. Although you can hardly dislike a film where Kelly Rowland stands up in the midst of her climactic pursuit to make obvious comparisons between penis size and the difference in length between Jason’s hulking machete and Freddy’s puny steel claws.