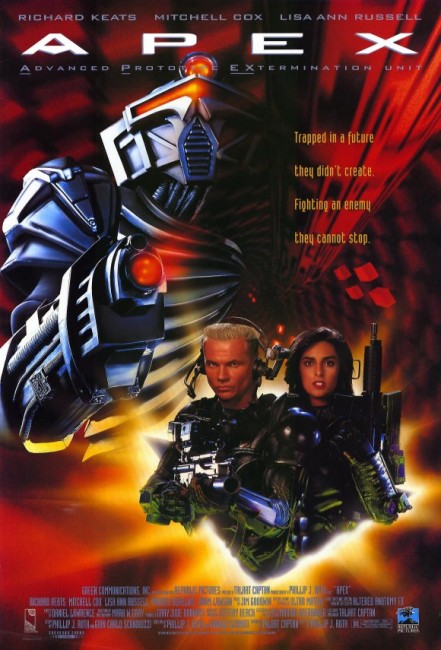 In the year 2072, the exploration of time is being conducted by robotic Advanced Prototype Exploration (or Apex) units. However, this is having an unforeseen effect in that the Apexs are creating viruses in the past and so robotic sterilisation units have been created to eliminate them. An energy discharge accidentally throws technician Nicholas Sinclair back through the time portal. When he returns to 2072, Nicholas finds that, as a result of a time paradox, he is now in a timeline alien to him where humanity is engaged in a pitched war with the sterilisation units.

Among the tiresome run of virtually interchangeable B-budget direct-to-video clones of The Terminator (1984), Apex was one of the few to exercise something in the way of imagination. It is a distinctly low-budget effort, particularly in its cut-rate effects. However, the time paradox storyline definitely holds interest and adds a different level that the usual 1990s science-fiction/action film never reached.

That said, Apex, which is often written as A.P.E.X. although not on the film’s credits, is not a terribly sophisticated variation on the time paradox story. One can pick all manner of holes in it – it is never clear how the story can progress from one person going back in time and destroying a rogue sterilisation unit to an entire army of sterilisation units engaged in a war against the human race – where did all the other robots come from?

Nevertheless, the time paradox storyline is reasonably well done and the characterisation is better than average. There are some effective moments, particularly during the scenes where the hero suddenly has to step into an existence he has never known before – discovering for the first time the details of a life as he enters his room, searching out his wife but finding her a different person to the one he knew in his timeline.

Apex is also similar to director Phillip J. Roth’s earlier but less interesting Prototype X29A (1992), which had a similar decayed future look and a plot where humanity was engaged in a last ditch war against two different species of robots, one created to destroy another type of robot that had gone out of control.

Odd trivia note:– If one looks carefully in the background of some of the alternate future scenes they can see the old Landmaster vehicle from Damnation Alley (1977) cruising about.