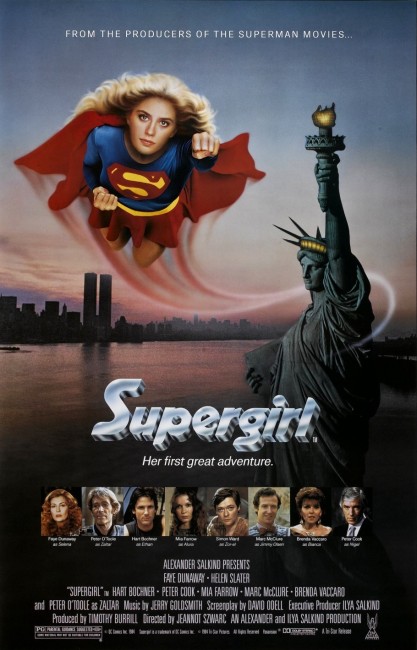 Argo City, a fragment of the planet Krypton, has been thrown clear from the planet’s destruction and survives in the Sixth Dimension. There Superman’s cousin Kara is shown by her teacher Zaltar how to use the city’s omegahedron power source to help inspire her art. An insect that Kara animates causes chaos and accidentally sucks the omegahedron down a warp vortex. The omegahedron emerges out of a lake on Earth and falls into the hands of the second-rate witch Selena who suddenly finds she can perform great wonders with it. Kara steals an experimental spaceship and goes to retrieve the omegahedrom. On Earth, Kara becomes Supergirl, as well as creates the secret identity of Linda Lee to sign in as a pupil at a girl’s boarding school. Selena develops a case of lust for the handsome school gardener Ethan and spikes his beer with a potion that will make him fall for the first woman he sees. When Supergirl becomes the unintentional recipient of that gaze instead, she and Selena come into conflict.

Father and son producing team of Alexander and Ilya Salkind had had enormous success with their lavish productions of Superman (1978) and Superman II (1980). Either of these count among two of the finest comic-book to screen adaptations. Behind the scenes however, both productions were enormously problem ridden. Among other things, the difference of opinion between the Salkinds and director Richard Donner led to Donner being fired with Superman II only partially completed and his replacement by Richard Lester. One of the differences had been that Donner wanted to play the comic-book legend seriously, while the Salkinds wanted a campier, unserious tone akin to the Batman (1966-8) tv series. With Superman III (1983), the Salkinds got their way and promptly almost entirely killed the series off by producing a disastrous mishmash that was overtaken by a badly miscast Richard Pryor and Lester’s slapstick tone. The Salkinds sold their interest in Superman off to Cannon after that, nevertheless went onto make Supergirl, followed by the tv series Superboy (1988-90). With Supergirl, they continued the camp, silly approach, making what is arguably the worst film in the Superman film series.

The character of Superman’s cousin Kara/Linda Lee Danvers first appeared in Action Comics #252 in 1959. Although she went through many different incarnations over the years, Supergirl proved a popular figure where DC were able in essence to repackage Superman for teenage girls. In her comic-book origin story, Argo City was thrown clear of the explosion of Krypton and drifted through space, protected under a dome until it was struck by a Kryptonite meteor shower that killed everybody, not before Supergirl’s father was able to send her to safety on Earth via rocketship. Supergirl was killed off in with Crisis on Infinite Earths (1985), DC’s reshuffling of their universe in order to streamline continuity. However, the popularity of Supergirl persisted and she subsequently underwent a number of different re-incarnations, including as an artificial lifeform created by Lex Luthor known as Matrix; a future daughter of Superman and Lois Lane; before a new version of the original character was reintroduced in 2003.

The script here, from David Odell, who also wrote the fine fantasy film The Dark Crystal (1982) and Masters of the Universe (1987) and the directed the flop Martians Go Home (1990), is an incoherent mishmash. Part of this may have resulted from director Jeannot Szwarc’s original print of 138 minutes being cut down to 105 minutes prior to general release (33 of which have been restored in the dvd director’s cut). Even so, Supergirl is incoherent chop suey where not much makes sense. All of the comic-book origin story has been thrown out and Argo City has without any explanation ended up in the Sixth Dimension, which for some reason appears to be located at the bottom of a lake on Earth. There is no explanation of how Argo City managed to survive the destruction of Krypton. There are gaping plot holes – there is no explanation offered of how Supergirl gets her costume, it suddenly appears on her in the space pod. The comic-book origin could easily have been retained and would have made much more coherent and better dramatic sense. You keep wondering such things as – if Supergirl has to get back with the omeagahedron before Argo is destroyed, why does she dawdle about signing into a boarding school and even engaging in a romance?

The director for this entry was Jeannot Szwarc – who had previously made the tv movie The Devil’s Daughter (1973), Bug! (1975), the brazenly commercial success Jaws 2 (1978), the romantic time-travel fantasy Somewhere in Time (1980), and subsequently went onto direct an even bigger flop for the Salkinds’ with Santa Claus – The Movie (1985), before becoming a prolific tv director.

Supergirl is a film where nobody involved on the production side is taking it seriously or has any respect for the material, rather seem to be looking down on it as kid’s stuff. Of all the grand villains that inhabit the Superman universe – Brainiac, Darkseid, Metallo, Mr Mxyzptlk, heck even Bizarro Superman – all the Salkinds came up with when left to their own devices was Richard Pryor doing lame comic schtick as a computer hacker in Superman III and Faye Dunaway as a campy witch fighting with Supergirl over a love potion-addled hunky gardener.

The disinterest extends to almost all levels. The sets for Argo City look like a styrofoam beehive. The effects are surely the flattest and least involving of any seven-figure science-fiction film to be made in the post-Star Wars (1977) boom, with visible wires and grainy matte lines everywhere. [Although, these would be outdone by the shabbiness of the effects in the subsequent non-Salkind Superman film, Cannon’s Superman IV: The Quest for Peace (1987)]. The one moment where the film displays any imagination is the single moment where Supergirl discovers her powers for the first time and indulges in a graceful display of aerial aerobics in a forest.

The worst part is the horrendous overacting. The mutual hammings of Peter Cook and Brenda Vaccaro, both riding about Faye Dunaway’s lair on a toy train at one point, surely make this a career low point for either. The worst offender is Faye Dunaway. Her camping up as far beyond the end of the hilt as she can, becomes fascinating to watch in its terribleness. Only a seasoned trooper like Peter O’Toole, who has been frequently guilty of considerable hamming, acquits himself with honour.

After a much publicised worldwide casting call by the Salkinds, the part of Supergirl was cast with an eighteen-year-old ingenue Helen Slater. The Salkinds were clearly hoping to transform an unknown into a star as they had with Christopher Reeve in the Superman role and Slater was even signed to a multi-picture deal. With the film’s flop, Helen Slater only went onto a middling career afterwards in films like The Legend of Billie Jean (1986), Ruthless People (1986) and The Secret of My Success (1987). Slater does okay in the part here, although perhaps has too much of a willowy winsome naivete to fully exude the stature the role requires.

Supergirl was subsequently revived in the Superman tv series Smallville (2001-11), played by Laura Vandernoort during the series seventh season. In a nice touch, Helen Slater also turned up around this time played Superman’s mother Lara. Supergirl (2015– ) is a live-action tv series starring Melissa Benoist and with Helen Slater making appearances as her adopted human mother. Supergirl also appeared in various episodes of the animated tv series Superman (1996-2000) and Justice League (2001-6) where she was voiced by Nicholle Tom, while Superman Unbound (2013) offered up a superb reinterpretation of the character. A parody version of Supergirl also appears in the Super Hero Speed Dating segment of Movie 43 (2013).