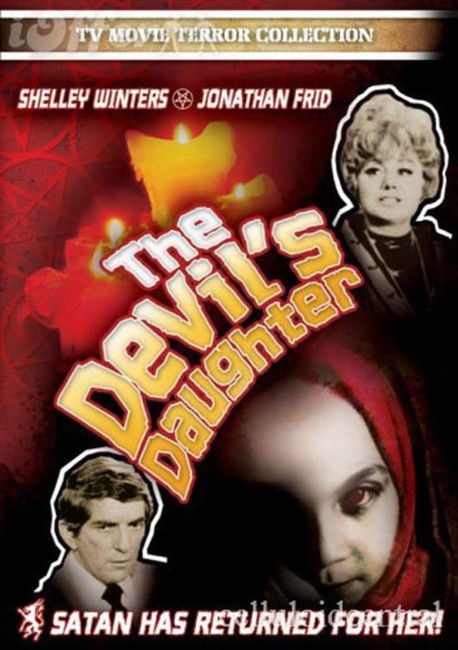 Diane Shaw travels to California for the funeral of her mother. At the gravesite, she meets Lilith Malone, a friend of her mother, who invites her to come and stay. Diane soon finds life at Lilith’s increasingly disquieting – Lilith has photo albums that cover Diane’s entire life and everywhere there is a strange symbol. Lilith becomes angry when Diane befriends Susan Sanford and accepts her invitation to move in and share her apartment. When Diane returns for a party, she finds Lilith and all of her friends in robes, taking part in a ritual. They inform Diane that they are Satanists and that she is The Devil’s daughter. She flees from their plans to marry her to a demon. As Diane meets the charming Steve Stone and decides to marry him, Lilith and the cultists start to arrange sinister accidents for those around her.

The Devil’s Daughter comes from the 1970s occult film cycle. This was created the success of Roman Polanski’s Rosemary’s Baby (1968) and its tale of an innocent housewife who comes to discover that her husband, neighbours and most of those around her are part of a conspiring cabal of Satanists and that the child she is pregnant with is The Devil’s son. The occult genre was subsequently consolidated with the huge hits of The Exorcist (1973) and The Omen (1976). The Devil’s Daughter comes from a period a couple of years after Rosemary’s Baby (and just before the release of The Exorcist) where a number of films and (surprisingly) tv movies were conducting copycat works about Satanism and witchcraft.

The Devil’s Daughter has set out to copy Rosemary’s Baby as much as it is possible to do without attracting a charge of plagiarism. There is the same innocent blonde woman who is drawn into a household of over-friendly aged people who have sinister intentions for her – in Rosemary’s Baby, it was for her to bear the Devil’s son; here it is that she is the Devil’s daughter. (Indeed, The Devil’s Daughter could almost be, if one imagines a change of the sexes, Rosemary’s Baby Grows Up). In both films, the Satanic cabal arrange sinister deaths for those who aid her, and both films culminate in a ritual where she surrenders to the forces of darkness.

In Rosemary’s Baby, Roman Polanski played the film as a paranoid, blackly comic joke that at the same time as it was laughing at the absurdity of what Mia Farrow was believing on the other was reinforcing it as scarily true. Alas, when The Devil’s Daughter tries to replicate the same paranoia, it does it in an absurdly heavy-handed way that wrings all the tension out of the film. Everything is heavily foreshadowed as though it were written in caps and underlined in black marker pen – Jonathan Frid drops a tray when Belinda J. Montgomery asks about her father, there is a picture of The Devil that sits in centre place over Shelley Winters’ mantel and the ominous recurrence of the strange symbol. In Rosemary’s Baby, the conspiracy had an ordinariness where you could easily dismiss everything as Mia Farrow’s silly fears, here it is just heavy-handed foreshadowing where fairly much everything that happens can be predicted from the word go. If that is not enough, then the obviousness of the title – The Devil’s Daughter – surely gives away what is happening.

Certainly, in the latter half, once Belinda J. Montgomery gets out of Shelley Winters’ home, The Devil’s Daughter starts to develop more in the way of ambiguity. There is a fine scene where Shelley Winters comes to visit and just by the way she hopes that the kids at the school are safe or plays with Barbara Sammeth’s collection of crystal horses suggests a great deal of malevolent intent towards Sammeth beneath the surface. There is also an effectively ambiguous scene where Belinda J. Montgomery sits in a school playground as two of the acolytes gather on the periphery and without noticing goes into a trance as a child almost walks into the traffic. Disappointingly after much build-up of the cult’s sinister intent toward Barbara Sammeth, her despatch is only allowed to happen off-stage, relayed in a single phone conversation from Robert Foxworth.

These scenes have an ambiguity that is missing in the earlier half and here the film successfully winds us around to never be entirely sure whether the people around Belinda J. Montgomery – fiance Robert Foxworth and his mother or judge Joseph Cotten – are part of the conspiring cabal or not. It is not known whether such was intended by the script or not but Robert Foxworth comes across as rather creepy. One minute he has come to console Belinda J. Montgomery about the death of her friend Barbara Sammeth and then within five minutes of conversation he is asking her out on a date and then a couple of minutes later is making plans for the two of them to go away for the weekend, which she returns from announcing that she intends to get married to him the very following weekend.

The film arrives at a classic ending, even if it is one can predict coming way in advance. [PLOT SPOILERS]. Belinda J. Montgomery’s marriage ceremony to Robert Foxworth is taken over by the Satanists, where Foxworth suddenly turns to her with eyes glowing, revealing that he is the demon that the group were trying to marry her off to all along. Everybody that we have seen throughout the film so far, with the exception of the late Barbara Sammeth, is revealed to be part of the conspiracy. It is this ending that makes The Devil’s Daughter work. Not to mention the fact that it contains the memorable image of Joseph Cotten appearing as Satan with cloven feet, just as depicted in the painting over the mantel.

The film toplines Shelley Winters who at the time was going through a decline in the popularity she had found as a leading actress in the 1940s and had fallen into corpulent middle-age where she spent the 1970s earning a paycheque in tv fare like this. As Diane, Belinda J. Montgomery, later the female lead in tv’s Man from Atlantis (1977-8), manages to seem the soul of sweet, cherubic innocence. It is a cathartic kick when she finally gets it together to stand up to the cabal and demand with absolute fire in her voice: “I swear on my oath that I will crush anybody who interferes with my marriage or my life.”

Present is also the distinctively beetle-browed Abe Vigoda, later famous as the grumpy Fish in tv’s Barney Miller (1975-81) as the leader of the Satanists; Jonathan Frid, the vampire Barnabas Collins of tv’s Dark Shadows (1966-71), as the mute butler; and Diane Ladd, who plays Belinda J. Montgomery’s mother in the opening scenes, and is amusingly referred to as Diane Lad on the credits.