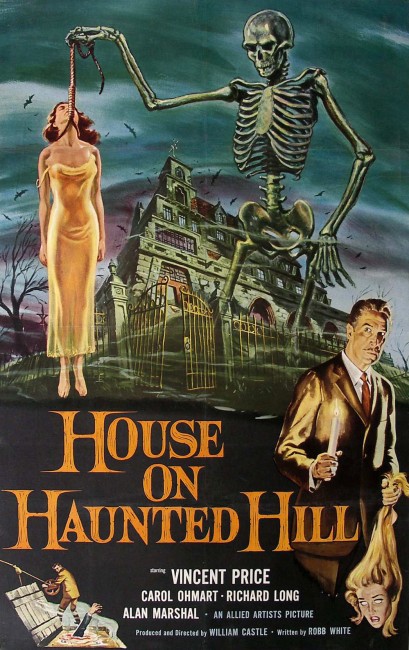 Millionaire Frederick Loren throws a haunted house party for his wife Annabelle. He invites five people from all walks of life – a test pilot, a secretary, an alcoholic, a sceptical psychologist and a newspaper columnist – to the notorious House on Haunted Hill, offering each $10,000 if they can survive the night. As they settle in for the night, all of them see ghostly apparitions. Loren’s much-despised wife is then found having hung herself in a suspicious manner. The guests begin to suspect that one of their number might be a murderer.

House on Haunted Hill is one of the films of the great William Castle. William Castle was a filmmaker who conceived his films in a spirit of entrepreneurial hucksterism not unakin to that of a P.T. Barnum. Castle conducted stunts like taking out insurance policies in case audiences died of fright – Macabre (1958), or wiring theatre seats up with electric shock buzzers to jolt audiences at appropriate moments – The Tingler (1959). The great gimmick in House on Haunted Hill was having a skeleton winched across the theatre on a wire at the point in the film when a skeleton appears to rise from an acid pool and pursue the heroine.

In House on Haunted Hill, Castle does not just stop at theatrical gimmickry – the entire film has been constructed as the cinematic equivalent of a fairground haunted house show with heads popping up out of boxes, ghosts out of closets, hanging bodies and acid pools. The plot involves a group being offered $10,000 each if they can survive a night in the titular house and Castle even uses star Vincent Price as the equivalent of a carnival barker at the start of the film, having him turn to the screen to offer the same challenge directly to the audience.

Dramatically, House on Haunted Hill is talk heavy. William Castle lacked any style as a director and his pace is slow and pedestrian – his films invariably belied the threat of scaring people to death that he constantly promised to do. Nevertheless, the luridness of Castle’s pop-up effects and some effective plot twists on behalf of frequent Castle collaborator Robb White make the film an undeniably entertaining carnival show. Vincent Price and Carol Ohmart play off one another with a marvellously glacial dislike.

William Castle’s other films of genre note as producer-director are:– as director of Crime Doctor’s Manhunt (1945), the sixth in a series of Columbia crime thrillers, of which Castle directed several, featuring a forensicologist against a split-personalitied killer; the psycho-thriller Macabre (1958); the classic The Tingler (1959), probably Castle’s best film; the haunted house film 13 Ghosts (1960); the psycho-thriller Homicidal (1961); Mr. Sardonicus (1961) about a man with his face caught in a grotesque frozen smile; the juvenile comedy Zotz! (1962) about a magical coin; the remake of The Old Dark House (1963) for Hammer; the Grand Guignol psycho-thriller Strait-Jacket (1964) with Joan Crawford; The Night Walker (1965), a psycho-thriller about a dream lover; the prank phonecall psycho-thriller I Saw What You Did (1965); the psycho-thriller Let’s Kill Uncle (1965); the ghost comedy The Spirit is Willing (1967); the reality-bending sf film Project X (1968); as producer of the classic occult film Rosemary’s Baby (1968); as producer of the anthology series Ghost Story (1972-3); Shanks (1974) with Marcel Marceau as a puppeteer who can resurrect the dead; and as producer of the firestarting insect film Bug! (1975).