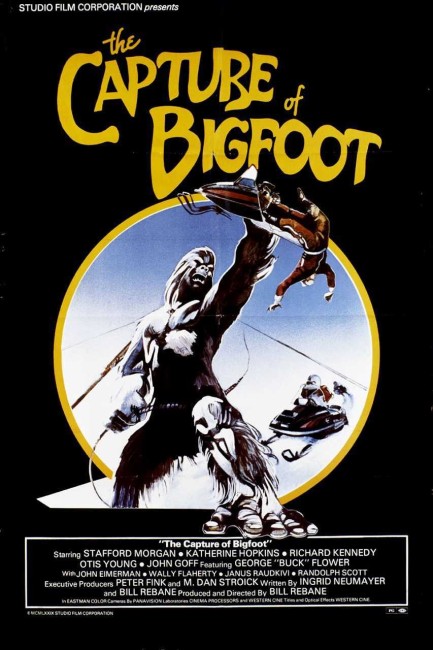 A trapper stumbles into town with a story about how his partner was killed by Bigfoot. Sawmill owner Harvey Olsen decides he wants Bigfoot captured at all costs and offers $10,000 to any trapper who can do so. Local game ranger Dave Garrett learns that the Bigfoot used to live in peace until upset by a geological expedition. He sets out to protect the creature from Olsen’s intended exploitation.

Some of these films had reasonable success at the box-office, although it was not until Harry and the Hendersons (1987) that any of the A-budget producers saw fit to take up the theme. All of these films played the Bigfoot story out with sensationalistic verve, with some of them even trying to convince audiences they were not works of fiction but documentaries. In most cases, the quality of the films was cheap and usually dull. By the 1990s and beyond, Bigfoot has become the regular stuff of horror films, family friendly films and comedies, and assorted Found Footage efforts. (For a more detailed overview see Bigfoot Films).

From the opening moments that contain some dreadfully insipid scenes of a team of huskies romping through the woods, The Capture of Bigfoot sets in with the feel of a trip to the dentist – as something to be endured as opposed to enjoyed. The film is tediously dull – from the flat, banal visual style, to the wholly uninvolving dramatics to the lifeless songs that fill the soundtrack, to the vague attempts at comic relief.

The dull script is a simplistic morality tale – about the innocent Bigfoot being exploited by corrupt businesspeople who receive their comeuppance in the end. There is an intriguingly novel turn when the plot tries to tie in Sasquatch to Indian legend and magic but this gets no development.

The most convincing part of the film is the Bigfeet themselves, which the makeup team have given surprisingly convincing facial features – although the full size Bigfeet do not convince as being anything more than people in fur suits.