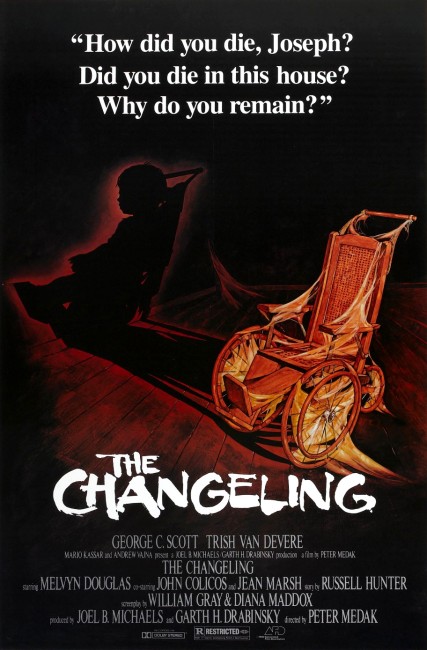 Following the death of his wife and daughter in a car crash on an icy upstate New York road, composer John Russell accepts a lecturing position in Seattle. The local Historical Society rent him the large old Chessman House. Soon after moving in, John begins to believe that the house is haunted. He and Claire Norman, a woman from the Historical Society, investigate. After conducting a seance, they discover that a young boy named Joseph is trying to communicate with them. Further investigation uncovers how the crippled Joseph was drowned in a bath by his father in 1907 but also brings to light secrets that a powerful aging senator wants kept buried.

In 1980, the classical haunted house story seemed an ever-so-outmoded genre. At the time it was made, The Changeling was a dinosaur, as surely any comparison with the other horror success of the same year, Friday the 13th (1980), would indicate. Even the audiences for either film were different – The Changeling appealed to an older audience, its cast were in the fortysomething age bracket, while Friday the 13th was cast with and pitched directly to the teen market who had no time for The Changeling‘s more sedate psychological thrills.

Certainly, there were other similar haunted house films around at the time – The Amityville Horror (1979) whose success came from pretending to be based on truth rather than association with the genre and Stanley Kubrick’s The Shining (1980), which was a work that broke all the molds of the genre. Elsewhere, the traditional haunted house film had gravitated to the province of the tv movie. With minor exceptions, The Changeling was one of the last of a breed. (A similar kind of ghost story aimed at an older generation was tried the following year with Ghost Story (1981), which proved a colossal flop). Of course, a couple of years later, Poltergeist (1982) came along and smartly relocated the haunted house in suburbia and brought the genre into the modern effects and pop-up horror arena.

Even though it does plumb an old genre, The Changeling conducts a fair job of doing so. Instead of a killing every five minutes, director Peter Medak takes his time developing atmosphere. At the outset, his scares at most consist of a door closing of its own apparent accord and a ball bouncing down the stairs. One even begins to think that the film might be too slow and sedate for its own good. However, once Medak comes to the eerie seance, the atmosphere picks up considerably. Some shots like the appearance of the bath chair at the top of the stairs contain quite a reasonable shock. In the end, perhaps The Changeling is just a little too sedate and old-fashioned for its own good – Peter Medak never lets his scares go often enough and mostly the film ends up being carried by the story which is structured with a sense of deepening mystery.

George C. Scott is miscast – Scott hardly seems the sensitive type who has just suffered from a nervous breakdown, he is more like a bear who wants to open up but is being forced to tone down and play it quiet. Trish Van Devere, George C. Scott’s real life wife, hardly makes an impression. On the other hand, Melvyn Douglas gives an extremely good performance of power and authority where one can visibly see an underlying fear starting to creep through.

Hungarian-born director Peter Medak was once seen as a promising director on the basis of the bizarrely surreal comedy The Ruling Class (1972), although nothing else in his career has come anywhere near that. His other genre films include The Hunchback (1997), a tv movie adaptation of The Hunchback of Notre Dame; the dire Species II (1998); and the Anne Rice tv mini-series Feast of All Saints (2001). Medak’s non-genre films include the Zorro spoof Zorro, the Gay Blade (1981) and the crime films The Krays (1991) and Romeo is Bleeding (1993). He has directed episodes of numerous tv shows including The Persuaders, Space 1999, The Professionals, Hart to Hart, Return of the Saint, Remington Steele, China Beach, Beauty and the Beast, Tales from the Crypt, Homicide: Life on the Street, The Wire, Cold Case, Carnivale, House M.D. and Breaking Bad.