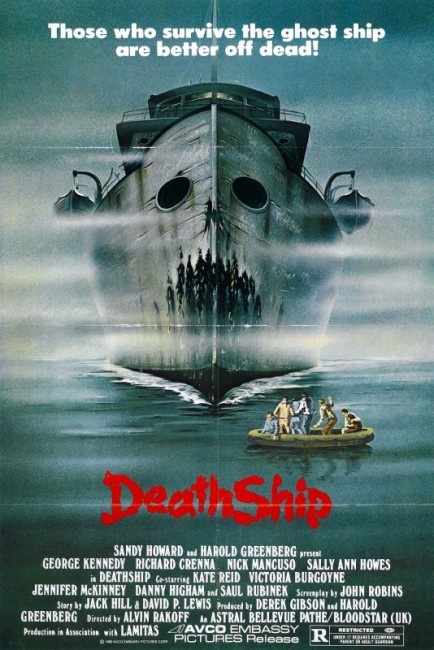 A cruise ship is at sea on what will be the last voyage of the autocratic Captain Ashland before he retires. As the passengers dine, the ship is abruptly rammed and sunken by a mysterious black freighter. Nine people, including Captain Ashland, his second-in-command Marshall and Marshall’s family, survive aboard a life raft. They then come across the black freighter anchored and board it. The ship is completely deserted but appears able to start its engines and set sail by itself. The ship then begins to eliminate the group’s numbers in a series of bizarre deaths. They discover its history as a Nazi torture ship. The ship also preys upon the wounded Ashland’s mind and he comes to believe that he is its new captain and begins to abet the killings to feed the ship the blood that it lives on.

There have been various films about haunted ships with the likes of Ghost Ship (1952), The Blind Dead (1974), The Fog (1980), Ghost Ship (2002) and Triangle (2009). There have even works about haunted yachts with Visitors (2003) and haunted submarines with the likes of Below (2002) and Ghostboat (2006). Death Ship is one of the classic works on the subject, a Canadian-British co-production that was regarded as a flop when it came out.

You get the feeling that Death Ship was conceived by people wanting to jump aboard the success of 1970s haunted house films such as The Amityville Horror (1979) and The Shining (1980) who decided to combine the idea of a haunted ship with the novelty death set-pieces for the supporting cast that were the talking point of the recent The Omen (1976). The ship itself appears to have been modelled on the malevolent truck in Steven Spielberg’s Duel (1971) – as a forebodingly black and menacing metal hulk that is seen ominously gliding through the water – you could maybe see Death Ship as the killer truck from Duel combined with the legend of the Flying Dutchman. The film also (sort of) taps into the 1970s fad for Nazi villains that we had in big-budget films such as The Odessa File (1974), Marathon Man (1976) and The Boys from Brazil (1978).

Director Alvin Rakoff builds the foreboding menace up well. The ship with its sinister black hulk gliding through the water, its ratcheting gears and pistons moving of their own accord, jibs swinging, the lifeboats abruptly launching themselves all without human hand looks suitably menacing. There are the various Omen-esque novelty deaths – a young Saul Rubinek getting his leg caught in a rope where the masts and pulleys then contrive to swing him up high in the air, dunk him in the ocean and leave him there to drown in the ship’s wake. This, being the first novelty death, sets the film up promisingly.

There are various other pop-ups shocks – an old lady suddenly developing a leprous face and then George Kennedy imagining he is strangling her. Later Victoria Burgoyne takes a shower that starts drenching her in blood, before she is thrown overboard by a maddened George Kennedy, while companion Nick Mancuso is driven crazy when a film projector will not stop showing Nazi newsreels even when it is smashed to pieces, whereupon he falls into a fishing net in the hold that is filled with skeletons. Meanwhile, in the midst of everything, George Kennedy appears to be going mad and thinking he is the ship’s German captain.

Unfortunately, Death Ship never does much beyond throwing novelty death scenes together. The film feels decidedly underdeveloped in the plot department – more like a feature-length episode of a half-hour anthology series than a full film. There is no particular explanation for the ship itself – the Nazi menace is raised vaguely but little is done to give it any significance. It is never, for instance, explained how the film went from being used as a floating Nazi torture ship to a haunted one that needs to kill all who come aboard. It is said that the ship demands blood but nothing is done with this idea.

Eventually, Death Ship fails to take its premise anywhere – the survivors never seem to be engaged in a fight to escape the ship or avoid their fate; they merely wait around to be the next victims chosen. Outside of that, there are simply not even enough in the way of novelty deaths to make the show sufficiently interesting.

Canadian born director Alvin Rakoff spent much time directing British tv plays during the 1960s and 70s. He ventured onto cinema screens sporadically with the exploitation film Passport to Danger (1958) and other works such as the cheap adventure film King Solomon’s Treasure (1978) and the disaster film City on Fire (1980) and an episode of the horror anthology Three Dangerous Ladies (1988?).

The far more fascinating name on the credits is the original story from Jack Hill, director of various B-movies such as Portrait in Terror (1965), Blood Bath (1966), Spider Baby or, the Maddest Story Ever Told (1968), the Women in Prison film The Big Doll House (1971), Blaxploitation films such as Coffy (1973) and Foxy Brown (1974), and a quartet of ultra-cheap horror films made in Mexico –, House of Evil (1971), Isle of the Snake People (1971), The Incredible Invasion/The Sinister Invasion (1971) and The Fear Chamber (1971) – that were the last films to ever feature Boris Karloff.