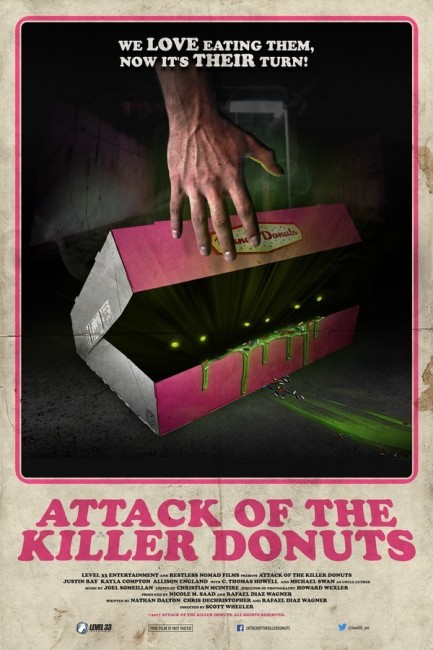 Johnny Wentworth goes off to his job at Dandy Donuts. His Uncle Luther, a scientist obsessed with perfecting a resurrection formula, comes in to retrieve a laptop that Johnny has taken. The owner Cliff tries to evict Luther. In the midst of the tussle, Luther’s vial of formula falls into the vat of donut mix unseen. The donuts then come to life and begin killing customers. In very short course, Johnny, his co-worker Michelle and best friend Howard find themselves under attack by killer donuts.

The deliberately ridiculous monster movie is a genre niche all of its own. It began in the 1950s and over the years has delivered classic wilfully absurd titles such as I Was a Teenage Werewolf (1957), I Married a Monster from Outer Space (1958), The Incredibly Strange Creatures That Stopped Living and Became Mixed-Up Zombies (1964), Attack of the Killer Tomatoes (1978), Slave Girls from Beyond Infinity (1987) and Sorority Babes from the Slimeball Bowl-O-Rama (1987) to name but a sampling. (For more see Films With Deliberately Ridiculous Titles).

The genre reached a peak with Troma films who made a selling point out of deliberately ridiculous titles such as I Was a Teenage TV Terrorist (1985), Fat Guy Goes Nutzoid (1986), Surf Nazis Must Die (1987), Stuff Stephanie in the Incinerator (1989), A Nymphoid Barbarian in Dinosaur Hell (1990), Strangest Dreams: Invasion of the Space Preachers (1990), Chopper Chicks in Zombietown (1991), Fertilize the Blaspheming Bombshell! (1992), The Killer Condom (1996) and Poultrygeist: Night of the Chicken Dead (2006). In more recent years, both the zombie and killer shark film have obtained great mileage out of the deliberately ridiculous title. Among these, Attack of the Killer Donuts emerges as one of the most wilfully ridiculous of them all. In fact, what we have is a Troma film in all but name.

The benefit of a title like Attack of the Killer Donuts is that it gets people in the door to watch out of sheer dementia value. This is clearly something the filmmakers have banked on where they figure that they had sold an audience on the basis of the title and demonstrate little concern for the quality of the film after that point. A minimal budget has been lavished on the film and nobody seems much interested in making an effort. Least of all in terms of the cast where people like Lauren Elisa and co-writer Chris DeChristopher who plays the boss of the donut shop seem to have made zero attempt to treat the material seriously in the performances they give.

Scott Wheeler is a former visual effects supervisor and the donut effects are at least quite competent for what is required of them. The film has the most fun with the donut attacks – of squealing donuts rolling and leaping around, jumping out of the fryer en masse; of ones with teeth impaling themselves in Alison England’s mouth; attacking Michael Rene Walton in the shower; and especially the image of donuts driving a cop car. However, beyond the ridiculousness of the title concept, Attack of the Killer Donuts is far too penny-pinched. It is a cheap and shitty film with just not enough chutzpah or effort made to make it more than that.