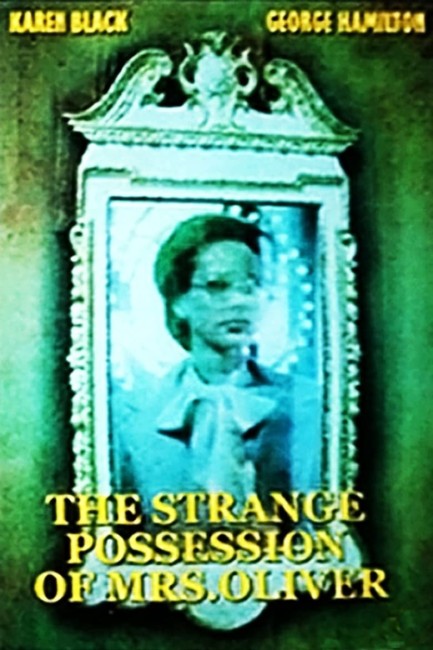 Miriam Oliver, the wife of successful California lawyer Greg Oliver, wakes from a strange dream. Afterwards, she begins to change. Resisting Greg’s insistence on plans to start having a baby, she shucks her conservative fashion sense and buys a more revealing red dress and a blonde wig. On impulse, she decides to rent a shorefront house at Crystal Beach. After wandering into a local bar there, people think she is Sandy Logan, a local girl who went missing. As other clues from her dream start to come true, Miriam tries to piece together the mystery of who Sandy was.

Possession themes were big during the 1970s. The Exorcist (1973) was one of the top-grossing films of all time and spawned a great many imitators. Most of these copies were negligible and only sought to up the barf-bag theatrics of the original. The Strange Possession of Mrs. Oliver was one variant that was made as a tv movie.

The film comes from two names that have impressive genre cvs – Gordon Hessler, a director who had come from work in the Anglo-horror cycle with films such as Scream and Scream Again (1970) and The Oblong Box (1969), although was most famous at the time for directing the Ray Harryhausen vehicle The Golden Voyage of Sinbad (1973). The other name is that of scriptwriter Richard Matheson who was most known for the Roger Corman Edgar Allan Poe films, The Legend of Hell House (1973) and the tv movie Trilogy of Terror (1975), which gave this film’s lead actress Karen Black her most famous role(s) out of a number of horror film appearances she made, as well as the original novel version of I Am Legend (1954). (See below for Gordon Hessler and Richard Matheson’s other films).

The Strange Possession of Mrs. Oliver almost reads like a 1970s women’s self-actualisation drama – see other films of this period such as The Rain People (1969), Up the Sandbox (1972), Alice Doesn’t Live Here Anymore (1974) and An Unmarried Woman (1978). It is the novel idea that possession – which in every film that followed The Exorcist was portrayed as something that makes people licentious, mouth obscenities and determined to shock – instead becomes the fulcrum whereby Karen Black gets to escape from the thumb of her controlling husband and reclaims her sexuality. This represents a considerable watering down of the possession film for tv movie audiences – where The Exorcist had vomiting, obscenities and crucifix masturbations, the most extreme this ever gets is Karen Black buying a sexy red dress with a low neckline and a blonde wig (and apparently throwing away her glasses).

I had problems with the dichotomy that the film creates here. Karen Black is initially portrayed as a meek housewife, bespectacled and conservatively dressed and not doing much to stand up for herself. After her apparent possession, she shucks this and starts to live. This creates a divide where you are entirely sure which side the film comes down on – whether it sees Karen Black discovering her sexuality as a good thing or whether it considers that her rightful place should be being prim and proper and fulfilling her husband’s wishes that she be a good breeder. By associating possession with her becoming more sexual and shucking the chains, the film invariably equates her repressed life with the side of good. Certainly, the thrust of sympathy in the film seems to be with her self-discovery. On the other hand, the ending has her back to her old self and seeking the comfort of her husband’s arms once again. The film’s treatment of these divides is sufficiently ambiguous that you are not at all sure which way its sympathies fall.

In fact, everything in the film is so ambiguous that take the word ‘possession’ out of the title and for much of the show you would not even have a genre film – it would just be a work about a housewife who suddenly decides she is not happy with who she is and wants to change. There is never (until the end explanation) any agency given whereby Karen Black is supposed to become possessed.

The latter half of the film loses interest in the possession plot and traipses off along the lines of a typical ghost story of the era wherein Karen Black seems to be being guided by a vague supernatural force to solve a mystery in the past – the disappearance of the girl whose personality now appears to be possessing her. The end explanation the film reaches is a major cheat. [PLOT SPOILERS] Here we learn that the title lied to us and there no possession at all. In fact, there does not even appear to be any supernatural agency at work either. Rather we learn that Miriam and Sandy were best friends (and improbably enough looked so identical that they could pass for one another), that Miriam was then killed by Sandy’s possessive boyfriend. This caused Sandy to go into the type of psychological fugue state that you only get in movies, mentally erased all knowledge of who she was and adopted Miriam’s personality and identity. (The flashback does not exactly make it clear what happened). Aside from one’s annoyance about the fact that the film cheated massively in leading us to believe we are watching a possession film, this seems ridiculously contrived.