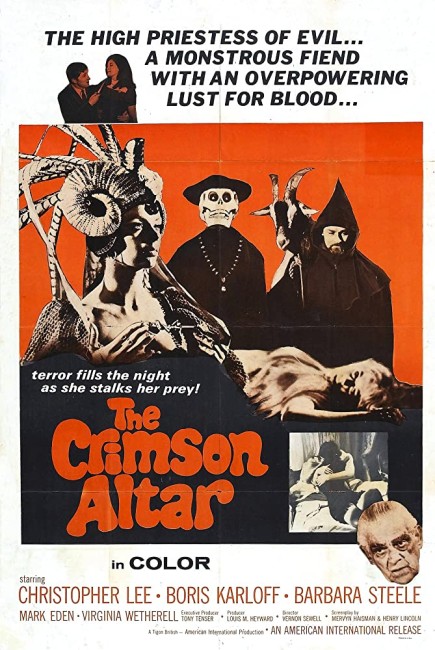 Antique dealer Bob Manning heads to Craxton Lodge in Graymarsh, the last known locale of his missing brother Peter. J.D. Morley, the owner of Craxton Lodge, claims to have never heard of Peter but invites Manning to stay. Manning soon begins to discover evidence that Peter was there and that he has met foul circumstances. Meanwhile, he is plagued by dreams of occult rituals concerning the witch Lavinia Morley who was burnt at the stake centuries ago and has promised revenge on the ancestors of her persecutors.

Curse of the Crimson Altar makes some claim to being based on the H.P. Lovecraft story, The Dreams in the Witch House (1933), although neither Lovecraft’s name nor the story are mentioned in the credits. As has been pointed out by H.P. Lovecraft fans, the connection is tenuous like the oddly-angled attic room. Lovecraft’s arcane esotericism having been pared down until the film is no more than a routine variation on the revived-witch-taking-revenge-on-present-day-ancestors story that has been in circulation ever since City of the Dead (1959) and Black Sunday (1960). The Dreams in the Witch House was later filmed by Stuart Gordon as an episode of Masters of Horror (2005-6), as well as in the films The Dark Sleep (2013) and H.P. Lovecraft’s Witch House (2021), both uncreditedly.

Director Vernon Sewell never generates anything but the most routine of suspense. Any atmosphere during the drug hallucination sequences, for instance, is considerably undone by such laughable sights as a body-builder in tights wearing what is clearly a motorcycle helmet with studs and a pair of antlers glued on it. The plot is weak, with the action consisting of much skulking around the house and a series of clumsily unveiled clues. The title is of little relevance – to be strictly fastidious, the story is not about the curse of the crimson altar but the curse of the green-skinned witch.

The film also manages to criminally waste a fine genre line-up. Cult Italian-horror queen Barbara Steele appears only painted in green and without any lines, while Michael Gough makes an appearance as a mad butler uttering cryptic portents then later turns up dead in a coffin without any explanation.

Christopher Lee has been through it all before and at least holds the dreary proceedings together by maintaining a consummate professionalism. Unfortunately, the mere fact that it is Christopher Lee tends to mitigate against the mystery that has been built up – Lee being perfectly polite and denying any knowledge of the missing person, at the same time as evidence to the person’s having been there continues to mount, only acts like a giant neon arrow that points in his direction.

The person that does best out of the affair is 82-year-old Boris Karloff who, despite being wheelchair-ridden and badly showing his age, manages to convey some sinister threat. The moment he invites Mark Eden to come and see his collection to which Eden innocently asks “What sort of collection?” and Karloff, with a sweet smile, answers “Instruments of torture,” is great (even if the mere tableful of instruments later presented heavily belies the moment). The greatest distinction Curse of the Crimson Altar had is in being Boris Karloff’s last film (apart from four films made in Mexico films that never received distribution until on video in the 1980s). Karloff died of pneumonia, which is reputedly something that he caught during the film’s location shooting in the draughty manor.