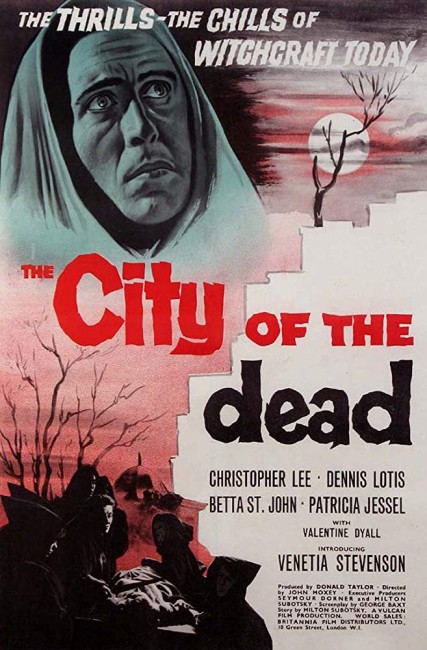 History student Nan Barlow is studying witchcraft. On the recommendation of her professor, she goes to the town of Whitewood, Massachusetts to research the life of Elizabeth Selwyn, a witch burned at the stake 250 years before. She arrives in Whitewood on Candlemass Eve only to discover that the townspeople form a coven led by the reincarnated Elizabeth Selwyn and that they want her as a sacrificial victim. Two weeks later when Nan fails to return, her cousin and boyfriend travel to Whitewood in search for her.

City of the Dead was the first film to patent the theme of reincarnated witches, Satanic covens and sinister New England towns where the inhabitants mutter portents and run before nightfall. The film sets up much of what would later become the cliches of the genre – the reincarnated witch, the Satanists hiding behind the guise of respectable townspeople, the occult tomes that provide information about the situation. These images would become the staple of the Italian Gothic movement of the sixties and US genre tv movies of the seventies. In particular, it was Mario Bava’s Black Sunday (1960), which came out in Italy not long after City of the Dead, that made the reincarnated witch theme an indelible fixture of the genre.

There is little subtlety in the script. Far too much is obvious from the outset. The Richard character’s scepticism is too obviously foreshadowed as something to be proven otherwise; Christopher Lee’s sinister presence is pointed at too obviously in the beginning; so too are the sacrificial victims; and there are no other contenders to make the revelation of who Elizabeth Selwyn has reincarnated as a surprise.

Coincidence also rates highly – the two heroines just happen to arrive in Whitewood on the only two sacrificial nights of the year, occult books are found that point the way to events that happen a few moments later. In a perverse way, the didacticism of these pulp elements and the plot that virtually repeats itself – the first heroine goes through things and then the film introduces a second heroine who repeats the first’s fate in almost a scene-for-scene replay with the same sinister figures on the roadside, the same villagers looking at strangers, the same man at the gas station warning them away from the town – gives City of the Dead a certain grim, almost predestined inevitability.

For all its pedestrian script, City of the Dead is a triumph of atmosphere – the township encased in perpetual fog, the coldly glaring villagers, silhouetted figures staggering across graveyards dragging giant crosses. Director John Llewellyn Moxey and the set-dressers create considerable mood out of the cobwebbed trapdoors and mist-wreathed graveyards. Although, the single soundstage main street set does belie the film’s title of a ‘city of the dead’. The youthful leads are weak but there are some fine sinister supporting performances from Christopher Lee and Patricia Jessel.

City of the Dead was also notable as being the first produced effort of Milton Subotsky and Max J. Rosenberg. Subotsky and Rosenberg later formed Amicus Productions and became one of the strongest competitors in the English horror market created by Hammer in the 1960s, being particularly noted for their horror anthologies beginning with Dr Terror’s House of Horrors (1965).