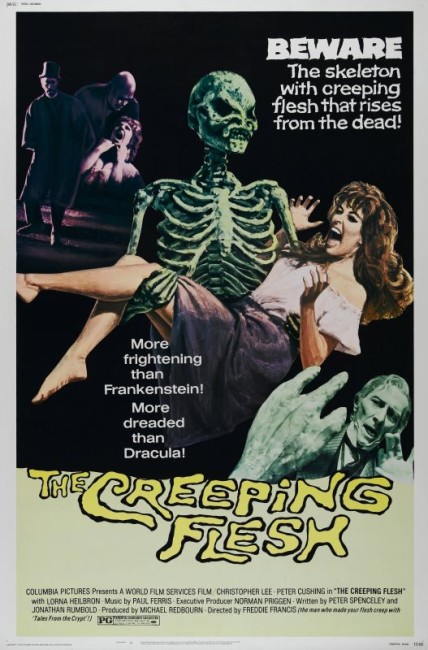 1893. Anthropologist Emmanuel Hilden returns from New Guinea with the skeleton of a primitive man that has a much larger brain capacity than Neanderthal Man but predates Neanderthal Man by three million years. Hilden is then startled to find the skeleton’s tissue regenerating when he washes it down with water. He is certain that the skeleton’s reconstituted blood can be used to create an immunity from evil for the human race. He injects his daughter Penelope with a serum taken from the blood to stop her being afflicted with the madness that drove his wife insane. However, this has the opposite effect and instead turns Penelope into a cold-blooded killer. She is placed in the asylum run by Emmanuel’s jealous brother James. James then steals the skeleton but when his coach crashes, the skeleton is left in the rain and regenerates to become a living incarnation of evil.

The Creeping Flesh is an interesting production that comes from the latter day of the Anglo-horror film. It was made by Tigon, one of several British companies that were trying to join the bandwagon of the success enjoyed by Hammer Films. It unites Peter Cushing and Christopher Lee, the two stalwarts of the Anglo-horror film, and in the director’s seat has the great and underrated Freddie Francis.

The Creeping Flesh is an intriguing film, although one that fails to fully work. However, its failure is one that comes by that rare means – that of taking on an overly ambitious plot. The first half builds a fabulous atmosphere of Victorian scientific discovery, creating a canny distillation of Victoriana’s dual obsessions with palaeontology and psychology. It is not unakin to another overly ambitious Victorian psychology effort of the same time, Hammer’s Demons of the Mind (1972).

From a good beginning, The Creeping Flesh quickly travels downhill, breaking up into too many loose subplots involving an escaped prisoner and family madness. These subplots are irksome in that their ultimate revelations are entirely incidental to the rest of the story. The ending, despite a neat sardonic twist, is left hanging with the monster still roaming out there. It feels like there should have been another entire act to the film where the scientists confront and defeat the creature. The ending is the point that most other horror films would begin whereas the film here is left hanging, seeming to cry out for some type of resolution.