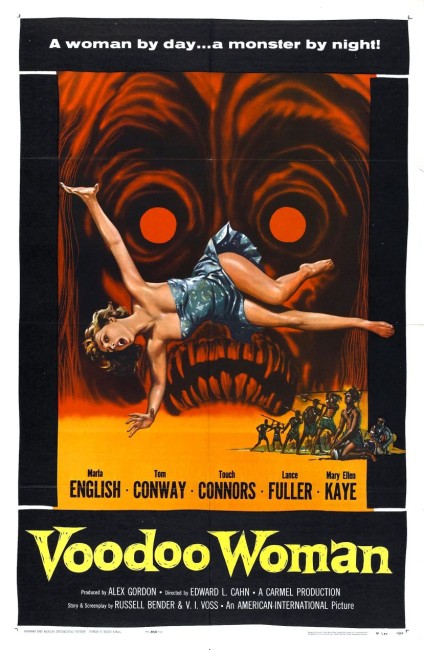 Marilyn Blanchard wants the secret location of the treasure that explorer Harry West hints at having. When Harry refuses to tell, she and her partner Rick murder him. Searching Harry’s room, they find a voodoo doll filled with gold. Marilyn has Rick pose as Harry to meet Harry’s guide Ted Bronson. They then set forth on an expedition into Bantaleya territory to find the source of the voodoo doll. Scientist Roland Gerard has been living among the Bantaleya tribes. He is obsessed with using voodoo rituals to turn a native woman into an unkillable monster that he can mentally control. So far though he has been unable to force the native woman he is using as his subject to go against her nature and kill. However, when Marilyn comes his way and he sees her cold-bloodedly kill, Gerard decides that that she must become his new voodoo monster.

Voodoo Woman is one of the classic B movies that came from low-budget studio AIP (American International Pictures) during the 1950s – AIP was also the studio that Roger Corman made his home for the better part of that decade. AIP had a reputation for creating films that began with the marketing campaign – first coming up with an attention-catching title and a lurid poster and finally a film to go with it. The majority of their films never quite fulfilled the promise the posters and titles had – The Beast With a Million Eyes (1955), for instance, was in mundane actuality an invisible alien invader where it was explained that the eyes referred to the small animals it was able to control. Voodoo Woman is clearly one of these films and seems to have been assembled more as a catchy title than as a coherent idea.

Plotwise Voodoo Woman is a peculiar melange of 1940s mad scientist film and a feminine monster movie a la The She-Creature (1956), which was also made by the same creative personnel. The film is definitely shot on a B budget – the jungle animals are only represented by stock footage, for instance. Which jungle or even part of the world the film is taking place in is never specified either. The film trades in bad B movie cliches of native tribes from the 1930s and 40s who speak in pidgin English and have names like Bobo.

Its cheapness aside, Voodoo Woman has an undeniable vigour that makes it highly entertaining. One of the great pleasures is Marla English’s performance. English plays the part as a real tough cookie where everything she says is a snarl and a taunt. Tom Conway plays opposite with a wonderful arrogance and madness. It is these performances and the often amusing dialogue that gives Voodoo Woman an undeniable pulp energy that makes it hard to dislike.

Voodoo Woman was later remade even more cheaply by Larry Buchanan, along with a handful of other AIP titles, as Curse of the Swamp Creature (1966) where the locale was transferred to the bayous of backwater USA.

Voodoo Woman was one of a handful of B movies made for AIP by producer Alex Gordon. Gordon made various other efforts like Day the World Ended (1955) and several other non-genre films for Roger Corman, as well as The Atomic Submarine (1959) and The Underwater City (1961). Gordon even wrote two films for Edward D. Wood Jr with Jail Bait (1954) and Bride of the Monster (1955). One of Alex Gordon’s most famous films was the aforementioned The She-Creature, which was shot back-to-back with Voodoo Woman and also featured Marla English, Tom Conway, Lance Fuller and was directed by Edward L. Cahn (see below). Voodoo Woman was so economically produced that Gordon and co managed to recycle Paul Blaisdell’s monster costume from The She-Creature to serve as the monstrous form of Marla English at the climax of this film.