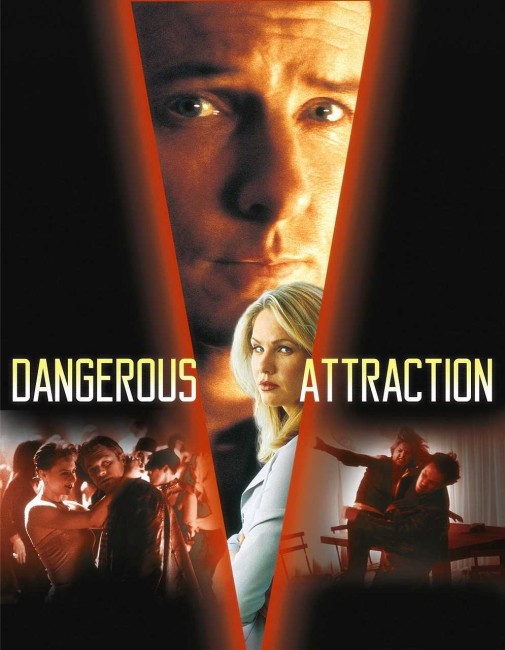 After Allison Davis receives a promotion in her job, she is asked out by Dan Patterson, a nerdy accountant with the firm. At the same time, Allison is drawn to Neil, a mystery man that she meets at a nightclub and has wild sex with. However, Neil also proves aggressive and controlling. At the same time, Allison’s ex-boyfriend Phillip is insistent about trying to get back into her life and acts threateningly towards the other two men. Someone then starts killing the people around Allison. It becomes apparent that one of the men she is involved with may be the killer.

Dangerous Attraction is little more than a standard copy of films like Fatal Attraction (1987) and in particular Basic Instinct (1992). Nevertheless, it does throw up one or two interesting twists on the usual formula of these copies. Interestingly – perhaps in that in this case Dangerous Attraction is directed by a woman, Penelope Buitenhuis – is that the focus of the film is on an ordinary working woman’s compulsive attraction to a dangerous man, rather than the reverse of a man being attracted to a femme fatale as in most of the male-directed efforts Fatal Attraction copies.

Penelope Buitenhuis does a reasonable job and invests Dangerous Attraction with some of the heated charge that its models did (albeit not quite as torridly). There is a wild scene where Andrea Roth picks the stranger up in a nightclub and takes him back to her place and they have sex while he dangles her over the edge of her balcony. Buitenhuis does especially well with the thriller aspect – the film does provide an excellent twist just after the halfway point that certainly makes one suddenly sit up and pay attention.

On the other hand, there is that which is simply contrived – Ian Tracey’s detective meets and then suddenly develops an obsession with Linden Ashby’s dark stranger and starts following him, even bursting into Andrea Roth’s apartment as they are having sex, police activity that would almost certainly be censured and subject to disciplinary action in real life. At the end, the script is revealed as being founded on a contortedly improbable series of jealousies where it seems that every man (and even woman) in the principal cast has been slightly disturbed in their sexual obsession with Andrea Roth. Not to mention a denouement that is heavily dependent on Fight Club (1999)-like revelations about split personalities. The film goes out on an effective double ending with the killer paralysed but one final lingering glimpse on his twitching toe that suggests that his paralysis may not be the case after all.

Linden Ashby, usually cast in pretty boy and bland action roles, gives a reasonable performance. To say more would be to ruin disclosures, lest to say that this is one of few times that Linden Ashby has shown that he can act and that the main twist did offer some surprises. The promisingly good Canadian actor Ian Tracey also gives an ambiguously smooth performance as the pursuing detective.