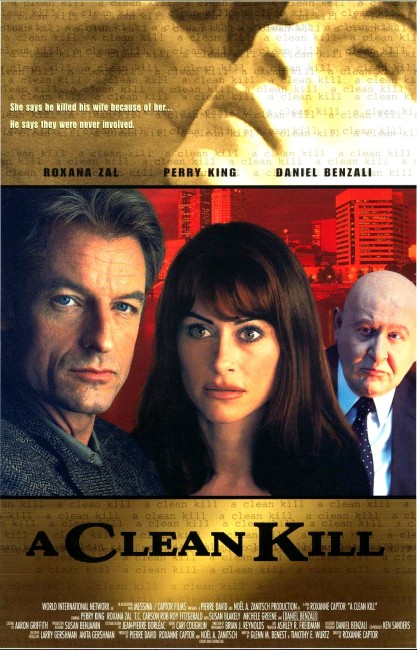 aka Her Married Lover

Katie Griffin walks into a police station and tells police detective Joe Lansing that thriller writer Richard Mannhart has just murdered his wife Laura by causing her car to go over a hillside. Police find the car and rush the barely alive Laura to hospital. Lansing interrogates Katie and obtains her story. She tells how she was a bystander present during a convenience story robbery. In the midst of the robbery, a mysterious man pulled her to safety from behind and then began to erotically caress her. She later identified the man’s voice as Mannhart’s and joined his writing class. The two engaged in a heated affair conducted in total secrecy. However, Mannhart kept stalling in his plans to leave Laura to be with Katie. Katie then read Mannhart’s new manuscript and discovered that he was writing about a man who plans to kill his wife. She took it upon herself to warn Laura. Meanwhile, two detectives accompany Mannhart to the hospital where he tells an entirely different account in which Katie was a student who developed an unbalanced obsession with him. Between the two accounts, Lansing and the detectives try to piece together evidence that will corroborate either story.

A Clean Kill/Her Married Lover is another of the psycho-thrillers made by Canadian producer Pierre David. David has produced an enormous number of psycho-thrillers, including the likes of The Paperboy (1994), Stalked (1994), The Secretary (1995), Daddy’s Girl (1996), The Dentist (1996), The Nurse (1997), The Landlady (1997), Alone with a Stranger (2000), Blind Obsession (2001), The Perfect Nanny (2000), The Stepdaughter (2000) and The Perfect Wife (2001), among numerous others. Most of these fall into an easy formula that involves a stranger entering someone’s house and proceeding to tear their life apart. Towards the end of the 1990s, Pierre David’s thrillers began to become increasingly more sophisticated and inventive. A Clean Kill/Her Married Lover certainly belongs in this category.

A Clean Kill holds an intriguing take on the formula of Pierre David’s usual psycho-thriller. In many ways, it could be just a standard copy of Fatal Attraction (1987) about a woman developing an unhealthy sexual obsession with a married man. The unique spin that A Clean Kill conducts is in mixing Fatal Attraction together with Rashomon (1950), the classic Japanese drama in which four people each have an entirely different account about what transpired during a crime.

The whole film here sits in an ambiguous place that never lets us know whether Roxana Zal is either an obsessed stalker or else the object of her obsession Perry King is trying to kill his wife as she claims. Every aspect of the film – from the affair that takes places in utmost secrecy, the phone calls to the wife, the confrontation in front of the class, the confession to best friend Michele Greene, the gifts left at Roxana Zal’s apartment and then taken away, even the scene near the end where the wife’s car crashes – has a fascinating ambiguity that can be made to fuel either wildly differing account of what happened. It is not until the very last frame of the film that director Roxanne Messina Captor confirms which story is true.

Pierre David’s films as a whole have been much tamer and have never tapped the heated sexuality of films like Fatal Attraction and Basic Instinct (1992). A Clean Kill merely dips its toes into the territory, although there is a captivating scene early on where a mysterious stranger erotically caresses Roxana Zal during the midst of a convenience store robbery.

Roxana Zal, a regular in Pierre David’s films, gives a good performance, as does also Daniel Benzali, the great inscrutable bald-headed actor, someone one has always thought should have gained a much higher profile and greater acclaim as an actor than he has enjoyed so far.