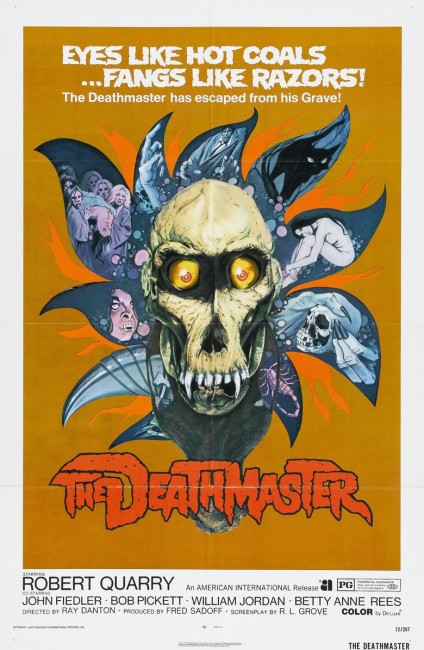 A group of hippies living together in a big house are joined by the mysterious but charismatic Khorda. Khorda soon has all of them under his spell with the profundities he speaks. What they do not realise is that Khorda is a vampire and is very long-lived. He now begins to prey on the group and starts to turn each of them into his own kind. Pico makes an escape from the house and tries to find a way back to rescue his girlfriend Rona before she fully succumbs to Khorda.

Although he is not remembered much today, Robert Quarry (1925-2009) was a star in horror cinema during the mid-1970s after having a breakout success playing the title role in Count Yorga, Vampire (1970). For a time after Count Yorga, Robert Quarry was seen as the American equivalent of Christopher Lee and appeared in several other horror roles – The Return of Count Yorga (1971), Dr Phibes Rises Again (1972), Sugar Hill (1974) and Madhouse/The Revenge of Dr Death (1974) – although this was a short-lived fame and Quarry’s name had largely been forgotten by the time the 1970s were over.

Deathmaster is one of these films that was banked on Quarry’s name. It doesn’t have a very good rap in genre press but I thought it was better than it had been dismissed as. In a decade that gave us Charles Manson and a few years later Jonestown, the move from hippie doomsday cults to vampire cult leaders seems a natural progression. Quarry makes a dashing figure with long hair, goatee and white robes. You do have to deal with the scenes where he stands around uttering nonsensical profundities and the hippies all nod in agreement and go “wow” – sample dialogue “If the seed of the flower drops, does it find its destiny in tomorrow? Or is there a wish for fulfilment in all tomorrows?”

A good half of the film is spent with the hippies and Robert Quarry’s guru inveigling his way into their fold before the move over into horror. The first appearance of Quarry as a vampire works rather well – where he takes Betty Ann Rees to her room ostensibly to seduce her only for her to look in the mirror and see he has no reflection and then to turn and see him in pasty face with fangs bared for the attack.

In the latter half, Deathmaster travels the route of a regular vampire film – all about the hero breaking back into the house/castle to rescue his love before she is about to be made into a full vampire and then standing up to kill the evil vampire lord. Quarry is no longer playing the charismatic cult leader and becomes a much less interesting figure – when unmasked as a vampire, Khorda lacks any of the sardonic aplomb that Count Yorga had. These scenes also slide over into the occult/devil worship cliches that were all the vogue after the hit success of Rosemary’s Baby (1968).

The film was directed by Ray Danton, a moderately known actor mostly known for tv roles. Danton made his directorial debut here, went on to direct English language scenes for the Spanish Crypt of the Living Dead/Hannah, Queen of the Vampires (1973) and directed/wrote Psychic Killer (1975) before becoming a regular series tv director.