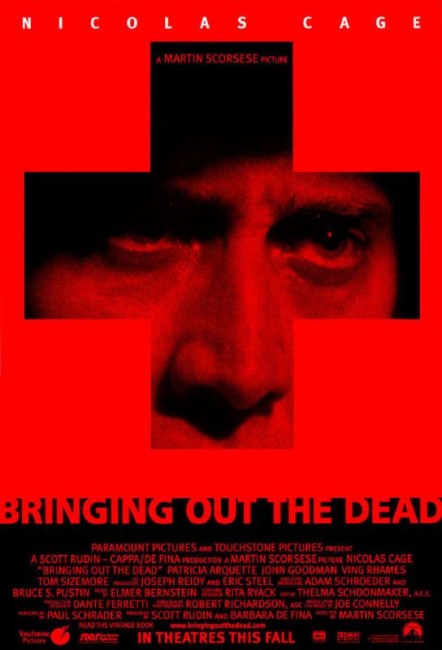 Ambulance driver Frank Pierce suffers from insomnia as he drives the night streets of New York City. Everywhere he sees the ghost of Rose, a teenage girl he failed to save. Lately all the people he has delivered to the hospital have died and he comes to realise that he is not there to save people but rather to bear witness to their deaths. At the same time, he becomes attached to Mary Burke, the daughter of a man he delivers to the hospital but who refuses to outrightly die. As he follows Mary into a drug den, Frank believes that he hears her father mentally calling to him to pull the plug and release him.

The films Martin Scorsese are usually associated with are urban nightmares like Mean Streets (1973) and Taxi Driver (1976) or tough guy gangster films like Goodfellas (1990), Casino (1995) and The Departed (2006). What many do not credit Scorsese for is his extraordinary versatility as a director. His works can range from genres as diverse as screwball comedy – After Hours (1985); musicals – New York, New York (1977); to rock documentaries – The Last Waltz (1978), No Direction Home (2005) and Shine a Light (2008); psycho-thrillers – Cape Fear (1991) and Shutter Island (2010); period drama – The Age of Innocence (1993); to religious epics – The Last Temptation of Christ (1988) and Kundun (1997); and biopics – Raging Bull (1980) and The Aviator (2004). What ever way one may typify Martin Scorsese, the one thing that unifies his films is their fierce passion – there is not a single one among his films that is in any way less than absorbing and a frequent number of them that are plain out great cinema.

Bringing Out the Dead is Martin Scorsese’s return to his trademark urban psychosis. Many rushed to call Bringing Out the Dead a lesser reprise of Taxi Driver – and there are indeed many points of similarity. Both films feature a burned-out insomniac who drives the night streets of New York City, encountering the city’s most hellish and disturbed elements. Both also feature the central character having to rescue a woman from a sinister individual who has sway over them. And both films also pointedly feature screenplays from Paul Schrader.

As in Taxi Driver, Bringing Out the Dead brims with astonishing, searing images of urban psychosis – junkies shooting up, the hookers and homeless, crack addicts smashing car windscreens, a car that blows up in the streets in one casual throwaway shot. Familiar images maybe, but Martin Scorsese invests them with a particular hallucinatory power that imprints itself upon you. Scorsese employs all the cinematic tricks in his arsenal – 180-degree pans, fisheye lenses, speeded-up camerawork, fluid shots snaking around the exterior of the ambulance – to make Bringing Out the Dead a gloriously hallucinatory hyper-realised fantasia of urban decay. The cast’s faces are photographed with a luminescence that leaves them looking pale and gaunt like corpses.

The opening minutes where we visit a hospital where patients overflow in the halls and scream for water while tied to a stretcher; where a security guard is employed to keep the crazies out of the lobby – “Don’t make me take off my sunglasses” – and nurses lecture addicts about misuse with a worldweary cynicism takes one aback after the images of the emergency room as family atmosphere that one has become used to in tv’s ER (1996-2009).

There is also a lurking sense of black humour (something that the film could well have done with more of) – the scene where Nicolas Cage unleashes his anger at ‘the world’s most pathetic suicide attempt’ and another with he wanting to be fired by a boss who doesn’t want to fire him. There are some great supporting parts from Ving Rhames as a driver trying to seduce a dispatcher and Tom Sizemore as a crazed driver constantly trying to beat up scumbags.

Where Bringing Out the Dead tends to fall down is the busyness of the plot. While by no means an uninteresting and an unabsorbing film, you are never sure by the end what point either Martin Scorsese or Paul Schrader were trying to make, other than to announce that such a vision of urban hell does exist. The vision could be accused of being unfocused. The film ends far more mutedly than the vision of Travis Bickle’s ultra-violent resolution and deliverance in Taxi Driver.

Similarly, the images of the fantastique – the girl’s ghost, Nicolas Cage hearing the thoughts of the man wishing to be allowed to die – are left unclear as to whether they are real or occurring inside Cage’s head. Some of the 120-minute plot could have been trimmed – the film could probably have done without the scenes with Cliff Curtis as a drug lord. Nevertheless, it is a searing and haunting portrait and the sheer passion and intensity of a Martin Scorsese film makes it intensely watchable.

Martin Scorsese’s other films of genre interest are:- the urban psychosis film Taxi Driver (1976); the revenge thriller Cape Fear (1991); the sinister asylum psycho-thriller Shutter Island (2010); and the children’s film Hugo (2011) about silent film pioneer Georges Melies. Scorsese also makes occasional acting appearances and has been in several genre films – as Vincent Van Gogh in Akira Kurosawa’s fantasy anthology Dreams (1990), as himself in Albert Brooks’s Hollywood satire The Muse (1999) and as a talking fish in the animated Shark Tale (2004). He also produced the modernised tv mini-series Frankenstein (2004), the documentary Val Lewton: The Man in the Shadows (2007) about the 1940s horror producer and the Norwegian-set serial killer thriller The Snowman (2017).