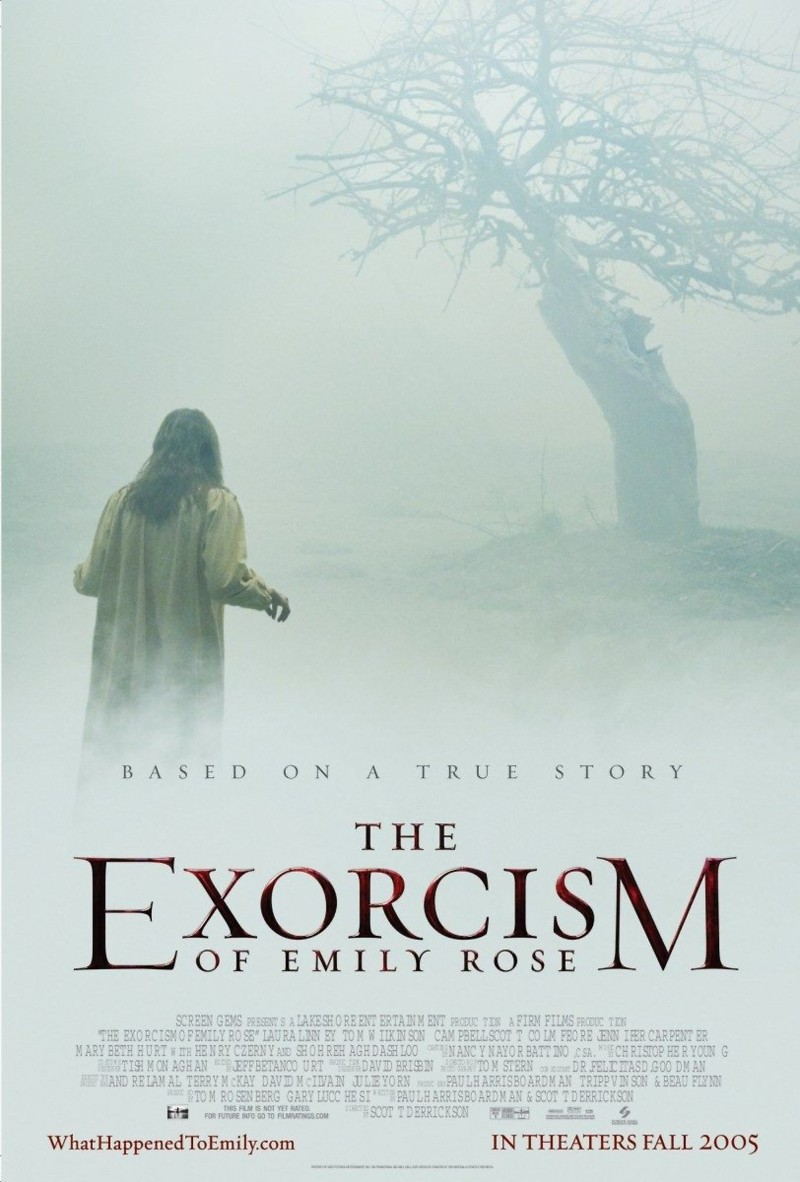 Rising young defence attorney Erin Bruner is assigned the case of Father Richard Moore, a Catholic priest charged with the murder of 19-year-old Emily Rose. Moore’s defence is that he was performing an exorcism. As the case gets underway, the story comes out of how Emily became possessed while at university and how the manifestations became increasingly more sinister. During the course of the trial, the prosecution wheels out many doctors to insist that Emily suffered from seizures and epilepsy but Erin proceeds to demolish their arguments. As the trial continues, Erin, despite being an atheist, starts to believe in the dark forces that Moore says are surrounding them and trying to influence the outcome of the trial.

The Exorcism of Emily Rose was a sleeper box-office hit when it came out and proved a considerable success, despite being made on only a slim ($20 million) budget. The success of The Exorcism of Emily Rose was all due to a canny marketing campaign that convinced audiences that the film was based on a true story. Marketing campaigns placed broadsheet size fliers in theatre foyers that were mocked up to look like a articles reprinted from newspapers and cited the number of exorcisms conducted and sanctioned by the Catholic Church, as well as a trailer that made much of the audio recordings of the exorcism. It is almost certainly this canny advertising campaign and the ‘Based on a True Story’ claim that made The Exorcism of Emily Rose into a box-office hit.

Alas, when seen, The Exorcism of Emily Rose emerges as a thorough disappointment. The ‘Based on a True Story’ claim soon proves to be totally bogus. Well, not entirely so. The film is based on a true-life incident – the story of Anneliese Michel of Wurzburg, Germany who was killed in 1976 during an exorcism. The two Catholic priests and Anneliese’s parents were convicted of manslaughter over failing to feed her and being negligent in seeking medical treatment during the course of the exorcism. A series of tape recordings made of the exorcism, which consisted of rituals conducted sometimes twice daily for nearly a year, proved instrumental evidence in the court case. And during the trial, it was argued by experts that Anneliese merely suffered from was Grand Mal seizures and Temporal Lobe Epilepsy.

On these matters, The Exorcism of Emily Rose adheres to the basic facts of Anneliese Michel’s case. However, on a great many others the film differs widely to the point that it calling itself based on a true story is something that stretches such a definition to snapping point. There does seem something thoroughly dishonest about The Exorcism of Emily Rose‘s claim to being based on a true story. For one, the film uplifts the trial from Germany in 1978 and transplants it to rural USA in 2005. That Emily Rose is claiming to be telling a true story and yet seems so unconcerned with the essential facts that it does not even blink twice about changing the names, the entire country and adding 27 years onto the time period, surely says all about how credible and accurate a depiction of the facts we can regard it as being.

Certainly, The Exorcist (1973), which has a great many similarities to Emily Rose, was also said to be based on a true story that William Peter Blatty admitted he only used as a springboard to telling his own story, but crucially this true story aspect was not the focus of a promotional campaign as it is in The Exorcism of Emily Rose. Taking a true story as inspiration is one thing, but widely differing from the facts and then trying to sell that as true is surely blatant falsification.

The more one looks at the details of the Anneliese Michel trial there seems more and more of a fundamental dishonesty in the subtly different spin that The Exorcism of Emily Rose puts on its telling of the story. For one, Anneliese Michel was known to be suffering from epileptic seizures, while The Exorcism of Emily Rose fabricates an ambiguity that suggests these were explanations applied by doctors who were so arrogant that they could not admit the possibility of a spiritual dimension to the human mind.

The film is in no doubt about the actuality of Emily Rose’s possession; in real life however, the trial was not so clear. Certainly, Anneliese Michel manifested voices and mouthed obscenities but it was not until after The Exorcist came out that people began to take the idea of possession seriously as an explanation. (Also, while Anneliese Michel mouthed obscenities and degraded herself, there were no reports of psychokinetic phenomena). What is also not mentioned in the film was how the priests believed that Anneliese Michel was possessed by everybody from The Devil, Cain and Judas to Nero and Adolf Hitler, which seems so preposterous that it says all it needs to about the naiveté of the exorcists.

The most damning difference between The Exorcism of Emily Rose and the Anneliese Michel trial through is the outcome. While The Exorcism of Emily Rose ends with the priest found guilty but being let off by the jury in a bizarre feelgood turnaround, the Anneliese Michel trial ended with the priests and parents convicted to jail where their naiveté was seen by the court as the direct cause of Anneliese’s neglect. More so, the court specifically stated that much of the so-called possessed behaviour was something that had been indoctrinated by the priests’ superstitions. A Catholic commission of investigation later backed this up and issued a decree that denied that Anneliese Michel was ever demonically possessed.

Given this – ie. if not even the Church believes there was any spiritual reality to what happened – it seems that all one has is an extraordinarily cruel series of abuses by a group of superstitious people (the rituals were such that Anneliese Michel’s knees ruptured from the 600 daily genuflections she was required to carry out). There are however many people who insisted that the incident was genuine and her grave became a shrine, even though an exhumation in 1999 showed that Anneliese’s body had decayed normally and was not preserved as many believed. In that the real case ended with a denial of anything happening from both the court and the church, this surely places the film, and its insistence that everything was real, in the same arena as the naive family members and devotees at the grave site in believing that something did happen in contravention of the substantial facts to the contrary.

When it comes down to it, The Exorcism of Emily Rose is a believer’s film. It surely belongs in the same camp as Mel Gibson’s The Passion of the Christ (2004). It is skewed towards a certain and absolute faith in the correctness of the position of the Catholic Church; it is derisive of any efforts to dismiss spiritual matters psychologically or rationally; in fact, it is not even interested in establishing the facts of the trial – the dramatisation of events is only shown on the side of the defence’s case, never on the side of the prosecution. (Indeed, a substantial part of the The Exorcism of Emily Rose‘s promotional push came in marketing the film to the same new Christian niche market that had emerged as a result of The Passion of the Christ, with director Scott Derrickson even coming out of the closet as a committed evangelical Christian).

A much more interesting version of the film would have constructed it as a Rashomon (1950) of sorts, or maybe like the recent Wonderland (2003), alternating the prosecution’s claim in spiritual actuality versus a version of events that showed them in purely mundane terms. In the end, The Exorcism of Emily Rose is a film that has already made its audience’s mind up for it as to what happened.

Even aside from that, The Exorcism of Emily Rose is a dull film. It plays like a tv movie version of The Exorcist. Even as a courtroom drama, it is deadly dull – courtroom drama films and tv shows hinge upon the provision of twists, doubts or surprises, where here the only story arc comes in convincing the jury what is already shown to the audience. The one thing that a film claiming to be a true account of a demonic possession and exorcism might have brought is a fresh approach to its theme. Alas, there is nothing in The Exorcism of Emily Rose that is not a cliché borrowed straight from The Exorcist – be it the voices, the telekinetic activity, the obscenities, the body contortions. The film cannot help but feel derivative. The rest is tired and tepid pop-up scares – people with hollow eyes bleeding black liquid, sinister dark figures, mysterious people that end up being supernaturally killed just as they try to offer helpful information, Emily being swallowed up by her bed – conducted with a complete lack of inventiveness.

The film is directed by Scott Derrickson who is a genre dabbler, having previously written Urban Legends: Final Cut (2000) and Wim Wenders’ Land of Plenty (2004) and directed one other film Hellraiser: Inferno (2000). Derrickson subsequently went onto conduct a not uninteresting remake of The Day the Earth Stood Still (2008), the horror film Sinister (2012), Deliver Us From Evil (2014) based on the supposedly true-life account of a New York detective encountering demonic forces, the adaptation of Marvel Comics’ Doctor Strange (2016) and the horror film The Black Phone (2021). Derrickson has also produced the Christian horror film The Visitation (2006), the horror film Kirsty (2014), Sinister 2 (2015) and Doctor Strange in the Multiverse of Madness (2022), as well as wrote/produced Devil’s Knot (2013) based on the true story of three teenagers in West Memphis Three who were convicted of Satanic ritual murders on next-to-no-evidence. (Although, given The Exorcism of Emily Rose‘s blatant distortion of facts, one wonders if this latter, which is based on a case where the teens were convicted out of people’s superstitions, is going to argue in the reality of the supposed ritual Satanic practices the teenagers were convicted of as well). He has been announced as director of a host of other projects including at one point an unmade version of Paradise Lost about Satan’s rebellion against heaven, of Dan Simmons Hyperion books set against a space opera venue and a fantasy version of the Biblical story of Goliath.

A much more accurate and evenly balanced telling of the Annaliese Michel story came in the German-made film Requiem (2006). The Asylum also made the low-budget Anneliese: The Exorcist Tapes (2011), which retold the facts in terms of a sensationalistic Found Footage film.