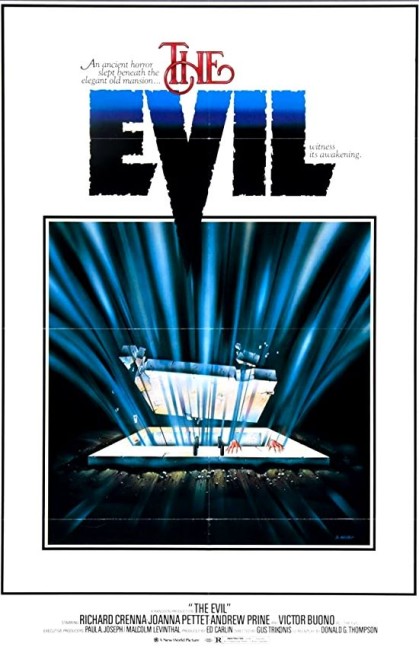 C.J. Arnold buys up the old Vargas House in order to set up a drug rehab centre. He and a group of friends go to conduct a clean-up of the house. As soon as they are there, strange and unexplained things begin to happen. C.J.’s wife Caroline keeps seeing a ghostly presence. All of the doors and windows suddenly become locked and they are unable to get out. With them trapped, the evil force within the house starts to kill off their numbers in a series of bizarre deaths.

The haunted house film, even though we associate it as an old and creaky genre from the 1940s, is a relatively new phenomenon. It never gained a huge popularity on cinema screens until The Haunting (1963) – unless you want to count the creaky comedies of the 1930s-40s where the ghosts were all given a mundane explanation. The true decade of the ghost story was in fact the 1970s, which brought us efforts such as The Legend of Hell House (1973), Burnt Offerings (1976), The Amityville Horror (1979), The Changeling (1980) and Ghost Story (1981), as well as sundry tv movies. The early 80s brought The Shining (1980) and Poltergeist (1982), which between them brought the ghost story into the modern era. (For a more detailed overview of the genre see Hauntings and Ghost Stories).

The 1970s was also the era of devil and occult films. The biggest horror successes of the decade were films such as Rosemary’s Baby (1968), The Exorcist (1973) and The Omen (1976). There were an enormous number of imitators of these. The Evil falls into a small sub-genre of haunted house films that were clearly standing with one foot in the traditional ghost story genre and another in the devil/occult film with the likes of The Sentinel (1977) where a haunted apartment building is revealed to guard the gateway to Hell and The Legacy (1979) wherein guests at a house are killed in a series of bizarre Omen-esque deaths before being revealed as part of a Satanic cabal.

When it came to The Evil, director Gus Trikonis apparently made a point of delivering all the spooky elements via physical effects. That is not too different from what many of the abovementioned were doing but if you compare The Evil to say Poltergeist, which achieves most of its scares via visual effects, the difference is obvious. All of the jumps here are represented by things like doors slamming, fires spontaneously lighting up and so on. The only visual effect throughout is the sporadic appearances of a ghostly spirit that only Joanna Pettet can see. This tends to represent a crudening of the usual eerie atmospherics of the ghost story – ie. we just get pop-up scares and little invested in atmosphere. The one effect that works the best is the scene where Lynne Moody is battered by a supernatural wind that throws her around the room and tears her clothes off.

Indeed, what we get is less a series of spooky scenes than a series of Omen-styled novelty deaths peppered at regular intervals throughout. These have a certain entertaining amusement to them – George O’Hanlon, Jr (the son of the actor who was the voice of Fred Flintstone) ends up hanging off a rope outside the house in the middle of a storm before he bursts into flame; George Viharo is strangled by an electrical cord; Cassie Yates is attacked by her own dog; Lynne Moody is thrown against the electrified bars on the windows; Andrew Prine is driven to try and cut his hand off with a buzzsaw and finally makes an escape only for the grass outside to turn into quicks and swallow him up.

Though it aspires to be a spooky film, The Evil only operates on the fairly crude level of these novelty deaths. Richard Crenna is set up, just like the rationalist heroes of Curse of the Demon (1957) and Night of the Eagle (1961), as sceptics who throughout the course of the film have the arc where they are forced to face the actuality of matters supernatural – although this is far too crude a film to make anything interesting out of such.

Where the film succeeds is at the ending where Richard Crenna makes it to open the sealed crypt beneath the house and [PLOT SPOILERS] encounters a white-on-white room that contains an imprisoned Devil dressed in a white suit. The role is played by Victor Buono, the big man actor known for appearances in films like What Ever Happened to Baby Jane? (1962), Hush … Hush, Sweet Charlotte (1964), The Silencers (1966) and Beneath the Planet of the Apes (1970), not to mention as King Tut in tv’s Batman (1966-8). Buono sinks his teeth into the dialogue and gives us a magnificently theatrical Devil, allowing an otherwise forgettable film to go out on a memorable ending.

Gus Trikonis was a minor director of the era. He had started out as an actor with small parts in films such as West Side Story (1961), Pajama Party (1964), The Unsinkable Molly Brown (1964), The Sand Pebbles (1966) and The St Valentine’s Day Massacre (1967). Trikonis made his debut as director with the low-budget biker film Five the Hard Way (1969) and various drive-in exploitation efforts such as Supercock (1975), The Swinging Barmaids (1975), Nashville Girl (1976), The Student Body (1976) and Moonshine County Express (1977). The Evil would appear to be Trikonis’s first semi-well budgeted film. He had a minor success subsequently with Take This Job and Shove It (1981). His only other genre efforts include the clone tv movie The Darker Side of Terror (1979) and the Filipino adventure/lost world film Dance of the Dwarfs (1983). Since the mid-1980s, all of his work has been in television.