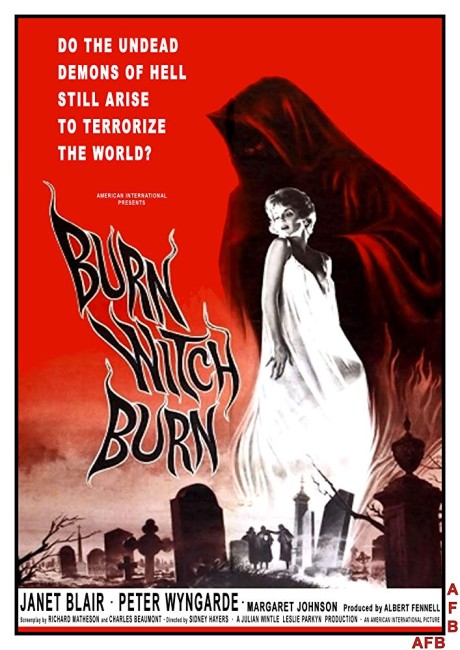 Norman Taylor, a psychology professor lecturing in belief and superstition, discovers that his wife Tansy is a practicing witch. Tansy is insistent that her charms have been responsible for Norman’s academic success. Angry at her superstitions, Norman forces Tansy to burn them. Almost immediately things start to go wrong for him as pupils accuse him of bullying and sexual harassment. He is drawn into Tansy’s web of superstitions, forced to believe in order to survive as a rival witch tries to use black magic to destroy him and his wife.

Night of the Eagle/Burn, Witch, Burn was the second of three films based upon the novel Conjure Wife (1943) by sf/fantasy author Fritz Leiber. Conjure Wife was previously filmed as a routine B-programmer Weird Woman (1944). This version comes adapted by two of the most renowned genre screenwriters of the era – Richard Matheson, who had written The Incredible Shrinking Man (1957), the thrice-filmed novel I Am Legend (1954), most of Roger Corman’s Edgar Allan Poe films and several episodes of The Twilight Zone (1959-63) and Star Trek (1966-9), and Charles Beaumont who wrote the rest of Corman’s Poe films, more episodes of The Twilight Zone and the screenplay for 7 Faces of Dr Lao (1964).

Charles Beaumont and Richard Matheson strip back the more extravagant scope of Fritz Leiber’s book – and surprisingly to the film’s advantage. In the book, all academic wives are engaged in witchcraft, whereas the film strips makes it just two of them; an incarnated stone dragon becomes the animated stone eagle of the title (a not very convincing special effect, the one area the film falls down); and they trim many of the subplots involving possession and people ending up in other bodies. The resulting film has been pared down to the essential core of Fritz Leiber’s droll comedy of academic rivalry and magic. Matheson, Beaumont and director Sidney Hayers then proceed to further strip things away to a level that was not in the Fritz Leiber story and tell Night of the Eagle as a psychological horror story not unakin to the work of producer Val Lewton in the 1940s. (Lewton produced works like Cat People (1942), I Walked with a Zombie (1943) and The Seventh Victim (1943) wherein the element of horror always inhabited a place of psychological ambiguity).

Director Sidney Hayers had first emerged on the Anglo-horror scene with the enjoyably Sadean Circus of Horrors (1960) and would go onto become a regular tv director on series like The Avengers, Magnum P.I., The Professionals and Baywatch, among many others. (See below for Sidney Hayers’ other genre work). Night of the Eagle is is Sidney Hayers’ finest moment – he never again made a work with such effectiveness as this. His sharp contrasts of fore– and background exude a tightly wound tension. There is lucid eeriness as the film plays out and the world of superstitions starts manifesting around Peter Wyngarde with scary but ambiguous effect. Hayers memorably restages the sequence from Vampyr (1932) with a person looking up out of a coffin as they are buried. The film culminates in the clever symbolic shot where Peter Wyngarde brushes against the blackboard where he had earlier boldly written his claim “I do not believe” and erases the ‘not’.

The Fritz Leiber novel was later filmed as the cheap Witches’ Brew (1979), which plays the story for comedy. The only other Fritz Leiber work to have been adapted to the screen is the vampire film The Girl with the Hungry Eyes (1993).

Sidney Hayers also directed the enjoyable Circus of Horrors (1960) about a psychopathic beauty-obsessed plastic surgeon hiding at a circus and two minor psycho-thrillers Assault (1970) and Revenge (1971). He is also credited as director on the third cinematically released Battlestar Galactica movie Conquest of the Earth (1981), although this was merely recut from episodes from the Galactica 1980 tv series.

Charles Beaumont (1929-67) was a noted horror and science-fiction writer during the 1950s and 60s. He wrote a number of screenplays including Queen of Outer Space (1958), three films for Roger Corman with Premature Burial (1962), The Haunted Palace (1963) and The Masque of the Red Death (1964), The Wonderful World of the Brothers Grimm (1962), 7 Faces of Dr Lao (1964) and the posthumously produced Brain Dead (1990), as well as twenty-two scripts for tv’s The Twilight Zone (1959-63). Beaumont’s episode of The Twilight Zone entitled The Jungle (1961) had a very similar plot to this film with a businessman being haunted by an African witch doctor’s curse that he initially dismisses as superstition.