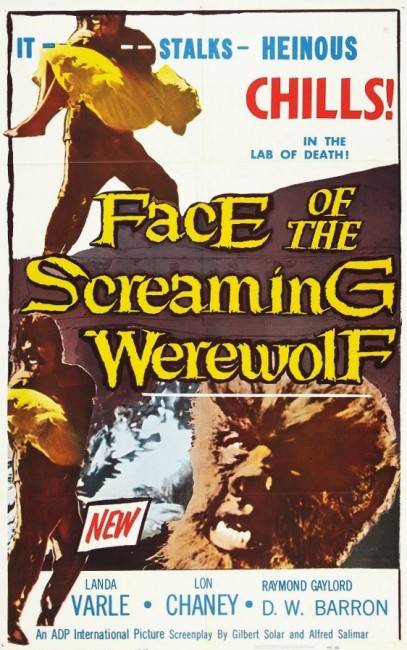 Scientists in Pasadena conduct an experiment in hypnotic regression using Ann Taylor as a subject. She recalls life as a temple maiden among the Aztecs. She is then able to lead scientists on an expedition to where the temple is located in the Yucatan. There they find two mummies and bring them back to the US – only for the mummies to be stolen. One revives and comes after Ann. The other is subject to a series of experiments at a wax museum where it emerges as a werewolf and goes on a rampage.

Face of the Screaming Werewolf was one of the films of Jerry Warren. Warren never gained the same notoriety as some of the other Z-budget directors from this period such as Edward D. Wood Jr, Herschell Gordon Lewis, Larry Buchanan and Al Adamson. Nevertheless, his films are just as bad, if not even worse. Directorial style and plot seemed irrelevant to him. As actual (as opposed to credits only – see below) director/producer, Jerry Warren made such miserably cheap efforts as Man-Beast (1956), The Incredible Petrified World (1960), Teenage Zombies (1960), Terror of the Blood Hunters (1962), the Golden Turkey classic The Wild World of Batwoman (1966) and Frankenstein Island (1981).

With Face of the Screaming Werewolf, Jerry Warren hit on a tactic that had been successfully conducted by Roger Corman in the last few years. Corman had obtained the rights to several Soviet-made science-fiction films and reissued them dubbed in English – see Battle Beyond the Sun (1963), Voyage to the Prehistoric Planet (1965) – or built new films around the effects and other footage – see Queen of Blood (1966) and Voyage to the Planet of Prehistoric Women (1968).

Like Corman, Jerry Warren managed to obtain the rights to several South American horror films that featured 1940s horror actors like Lon Chaney Jr and John Carradine and then reissued these in cut down form with his own name on the credits as director and producer. Face of the Screaming Werewolf, the first of these, was composed from the Mexican The Aztec Mummy (1957) and The House of Terror (1960). Warren went onto make Curse of the Stone Hand (1964), edited from the Chilean films The House is Empty (1945), The Lady of Death (1946) and The Yacht Isabel Arrived This Afternoon (1950); Attack of the Mayan Mummy (1964), further edited from The Aztec Mummy; and Creature of the Walking Dead (1965) from the Mexican Mark of the Dead Man (1961).

With Face of the Screaming Werewolf, Jerry Warren has slung together two completely unrelated films. The Aztec Mummy was a popular film that spawned several sequels, while The House of Terror was actually a wax museum comedy starring the popular Mexican comic Tin Tan (real name German Valdes) and featured Lon Chaney Jr playing a variant on the role that had he had built his horror career on – the title character in The Wolf Man (1941). (Not that you would know that the original material was a comedy from what it ends up as here where Warren has dumped all the comedy elements, everything but a single scene featuring Tin Tan, and kept only the wolfman scenes).

The Aztec Mummy runs 80 minutes long, while The House of Terror runs for 60 minutes. Needless to say, when two films, which have a total runtime of 140 minutes, and no connecting plot elements or stars, are cut down into one that only runs for 60 minutes, the result verges on almost complete incomprehensibility. No new scenes appear to have been shot for this film as far as I am able to tell. Jerry Warren has simply patched everything together in the editing room – now the expedition brings two mummies back from Yucatan, both are stolen whereupon we segue into The House of Terror where one of the mummies is revived by scientists operating in a wax museum and turns into Lon Chaney Jr’s wolfman.

Jerry Warren is not helped by the fact that both Mexican films are dull, down about the level of the average Monogram or PRC cheapie of the 1940s in terms of technical proficiency and style. Of the footage that Warren takes from The Aztec Mummy, the scenes flashing back to the Aztec temple drag out. Moreover, they come without the benefit or dubbing or narration, leaving it hard to work out what is happening.

Perhaps the most interesting thing about the Aztec Mummy scenes are the film’s introduction of a hypnotic regression theme. There was a fad during this era for films where women recalled their past lives following the real-life Bridey Murphy story where a hypnotist claimed to have regressed a housewife to her past life. This was made into a docu-drama The Search for Bridey Murphy (1956) and these claims influenced a number of other genre films from the period including I’ve Lived Before (1956), The She-Creature (1956), Blood of Dracula (1957), I Was a Teenage Werewolf (1957), The Undead (1957), The Bride and the Beast (1958) and The Alligator People (1959), even a musical On a Clear Day You Can See Forever (1970).

After the theft of the mummies, the film seems to abandon anything more to do with The Aztec Mummy. We do get a scene where the mummy invades the home of Rosa Arenas and abducts her, which is passable in its cheap way, but peters to an abrupt dramatic standstill where the mummy is killed off-screen with only a newspaper headline to denote its despatch.

Lon Chaney Jr’s wolfman survives somewhat better. Indeed, the scene where he first wakes up and sees the full moon outside the window before transforming is the best in the film. Chaney, then well on his way to a washed-up career and a heavy alcohol problem, seems to have an authentically mournful and haunted look in his eyes that he never did back in 1941. The scenes with the werewolf rampaging at the climax are reasonable and generate the few moments of atmosphere in the otherwise sorry exercise.